icegodofhungary
polycounter lvl 2
Offline / Send Message
icegodofhungary polycounter lvl 2
Nov 2019
Since the summer I have been practicing trim texture techniques. I drew from The Ultimate Trim Technique and Polygon Academy's Trim Texture videos. More recently I decided to make a small environment to practice.
I created a trim sheet using Max and Zbrush as prescribed in Tim's videos. I generated other maps from Substance Designer and channel packed my roughness, metallic, and AO. Nothing special, pretty generic. I then started making modular pieces from it in Maya and importing them into Unreal. I also created a mud material and a moss material in Designer to use for vertex blending, which would hopefully add variety and interest to generic modular pieces. I used a terrain with a second mud texture on it to add some thicker mud around.
Texture attempt #1: 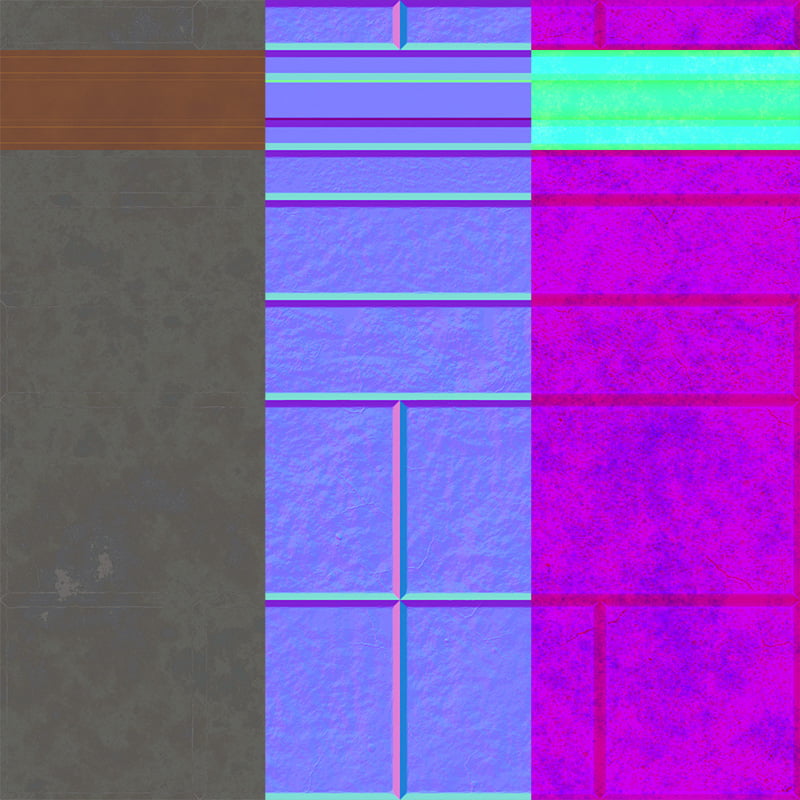 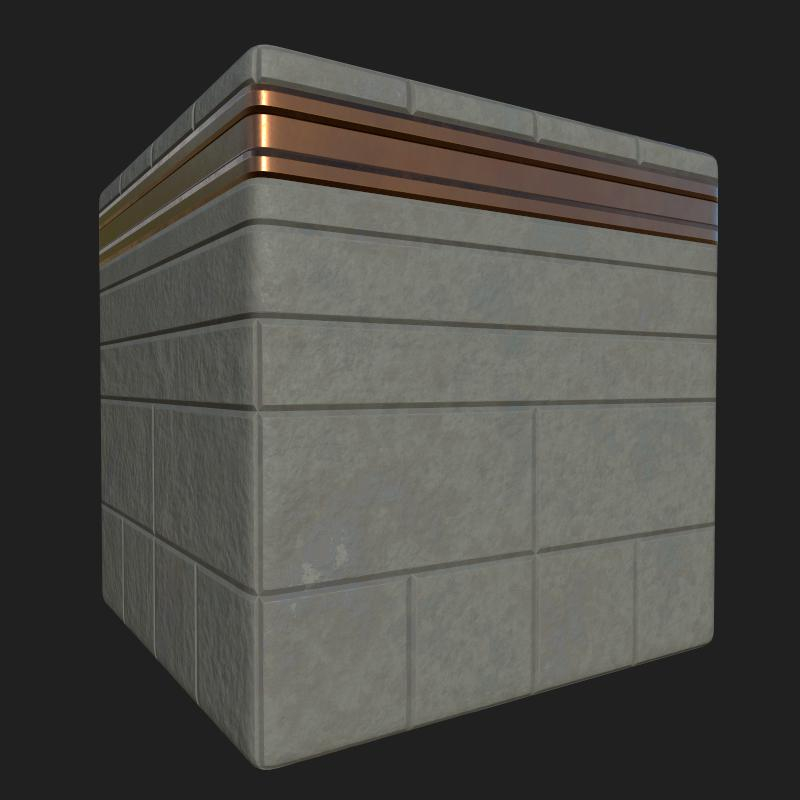 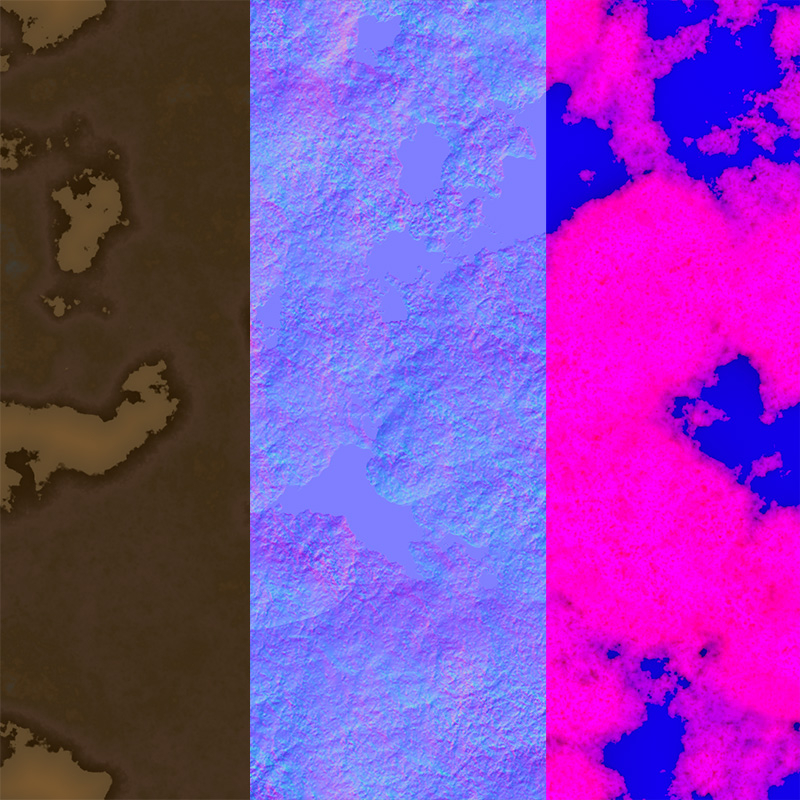 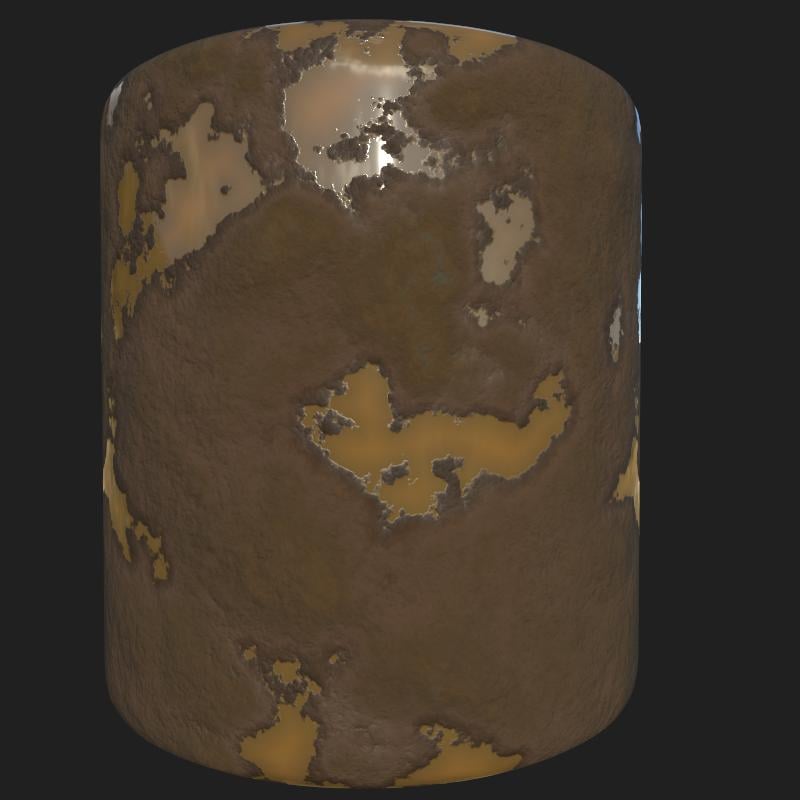 This mud was created by removing the water puddles from the texture above, and raising the low spots a bit. Then changing the color a little. This was to be used for vertex blending where as the above was used on the terrain. 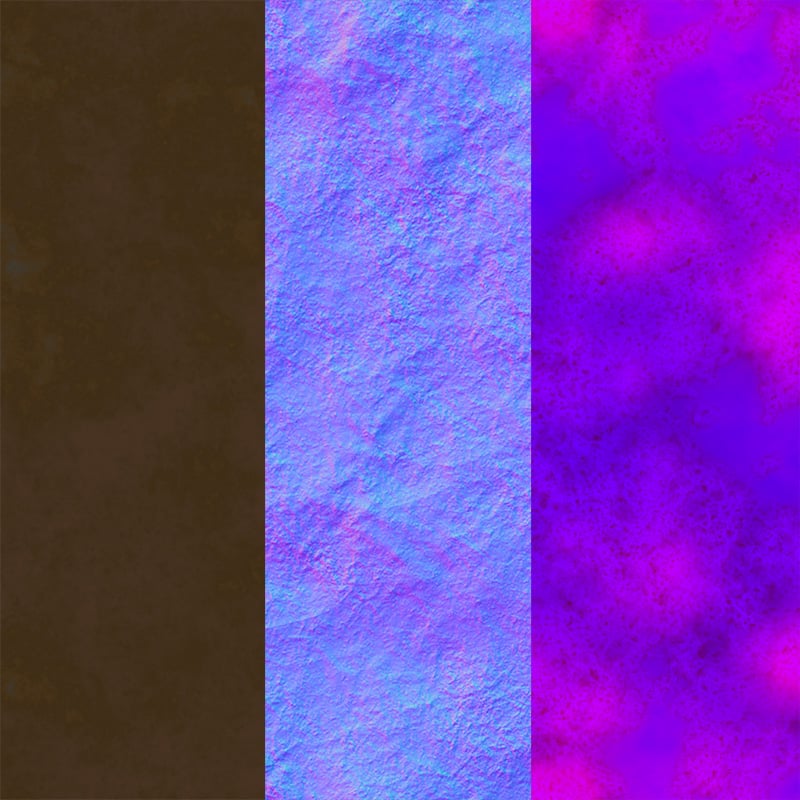 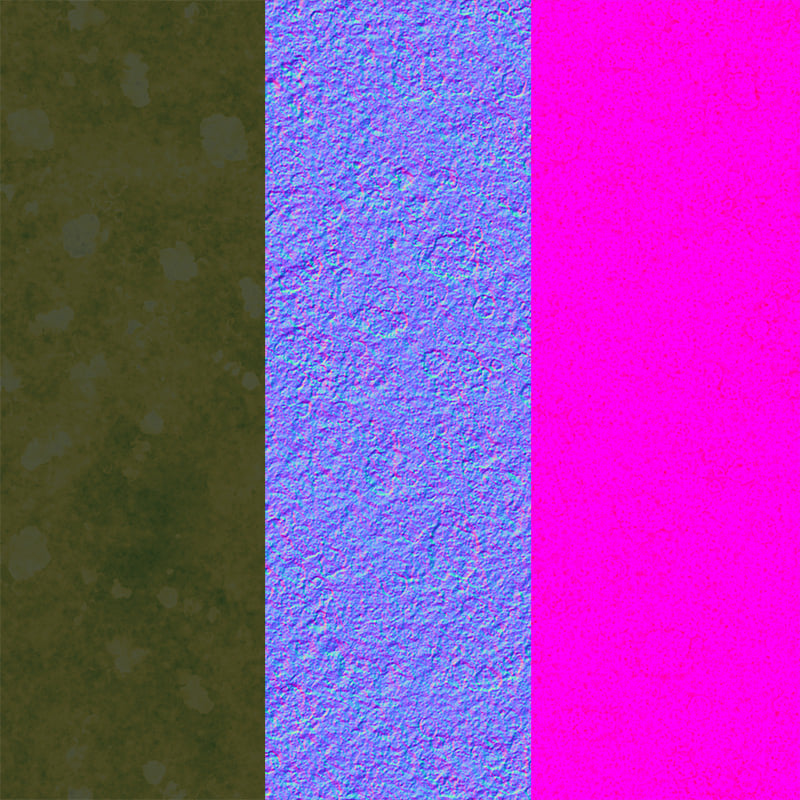 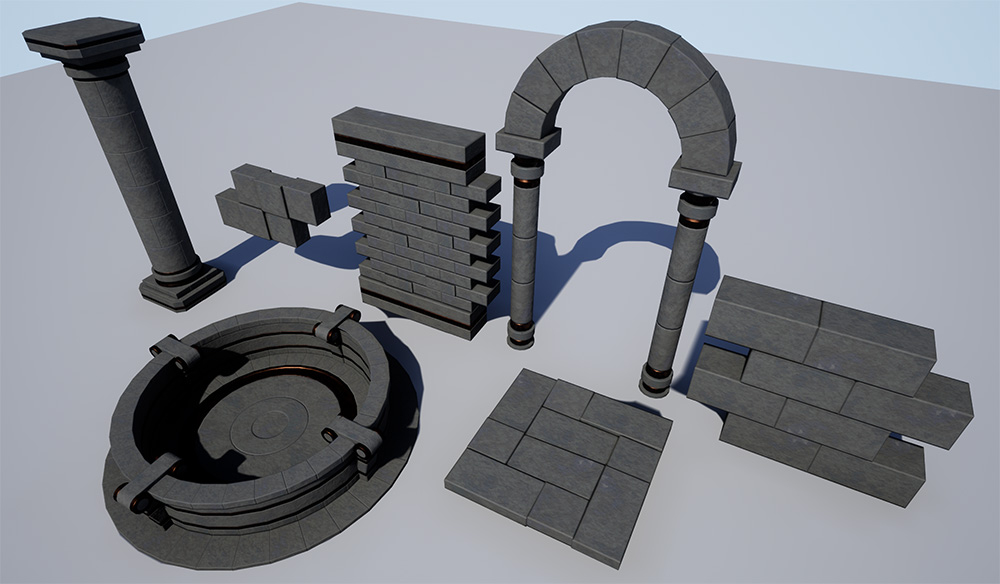 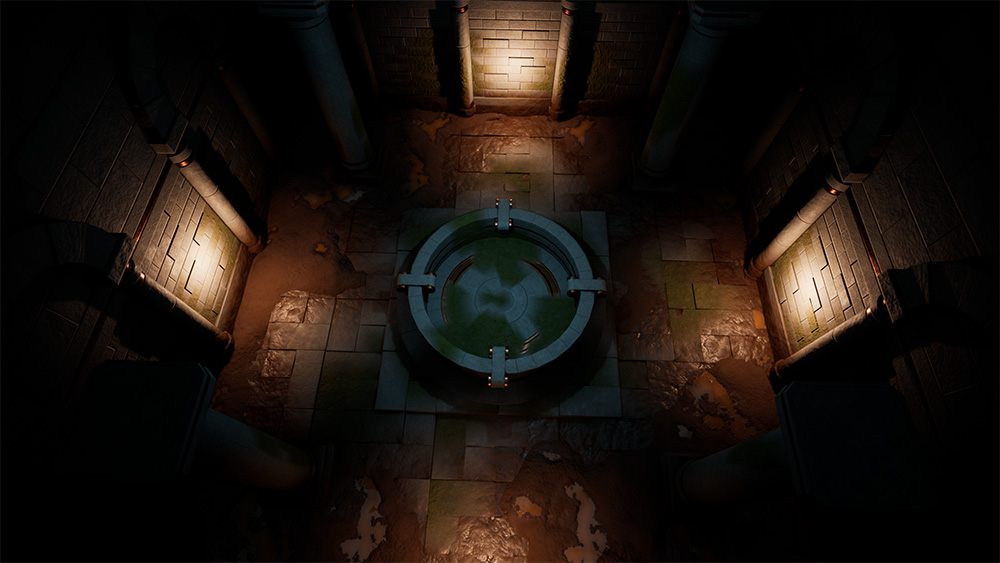 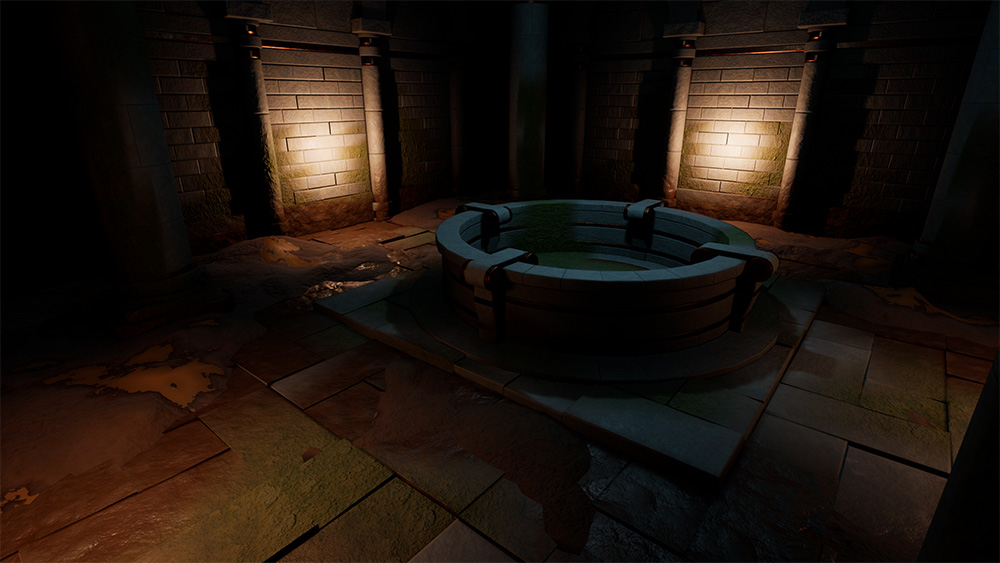 I had a few problems with this result.
1) It was too generic. I want to practice pushing trim sheets to their breaking point. I also want to create something that stands out from common generic ancient ruins type stuff. If the quality was higher, I would let the uninspired design slide. But I can't see this stuff being in God of War 4 or 5.
2) I needed more support geometry for the vertex blending. And I was using just color blending, not height blending. This didn't look very convincing as mud build up in this damp environment. The lighting was seriously lacking as well.
3) I wanted to make a pillar just to make a pillar, it wasn't really needed. The environment was cramped enough and the pillars just made it more claustrophobic. So I needed to make the area larger.
I then started re-doing my modular pieces, trying to push the form a bit more. I stuck with an iterative process throughout. I wasn't working from concept art of any kind (which is a mistake I keep making). I was worried about losing focus so I tried to unify the design by picking out a certain motif and just repeating it over and over. I also didn't create any modular pieces unless I needed them. Where as before I was just making stuff and trying to find a place for it in the environment. 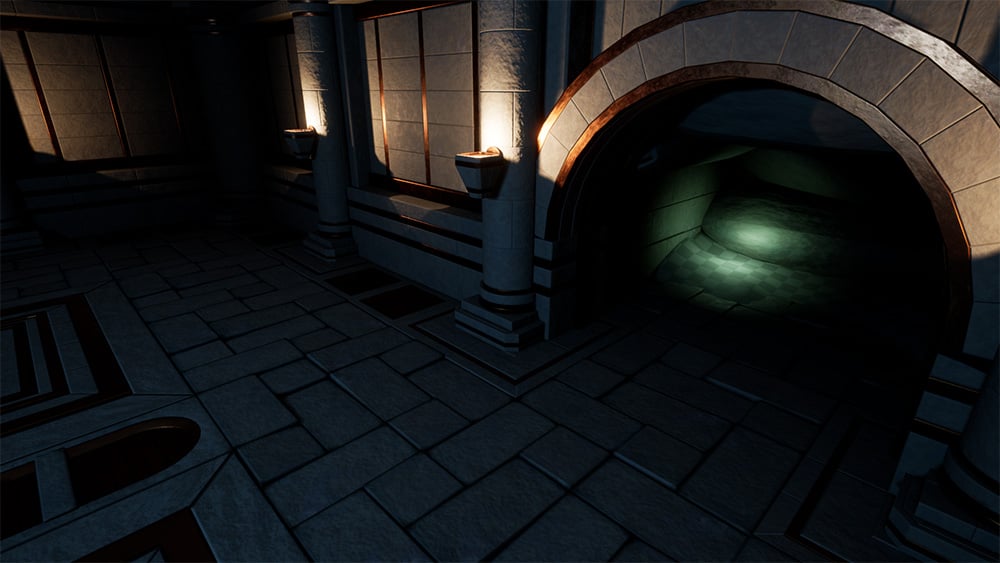 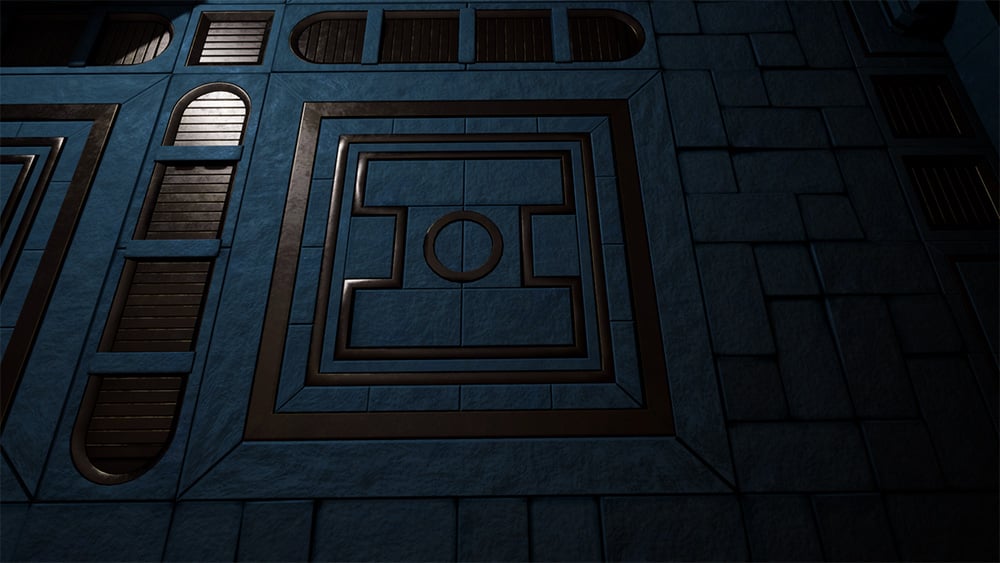 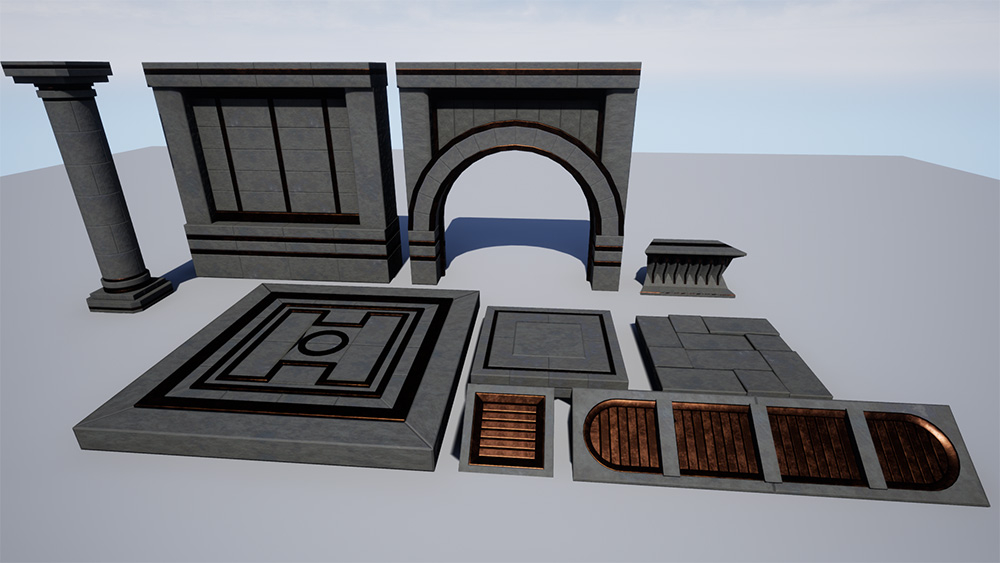 I still wasn't super happy with this. I had pushed it a little but was still sticking to very blocky and simple shapes. The old pillars and new fountain weren't jiving. So I went back to it. 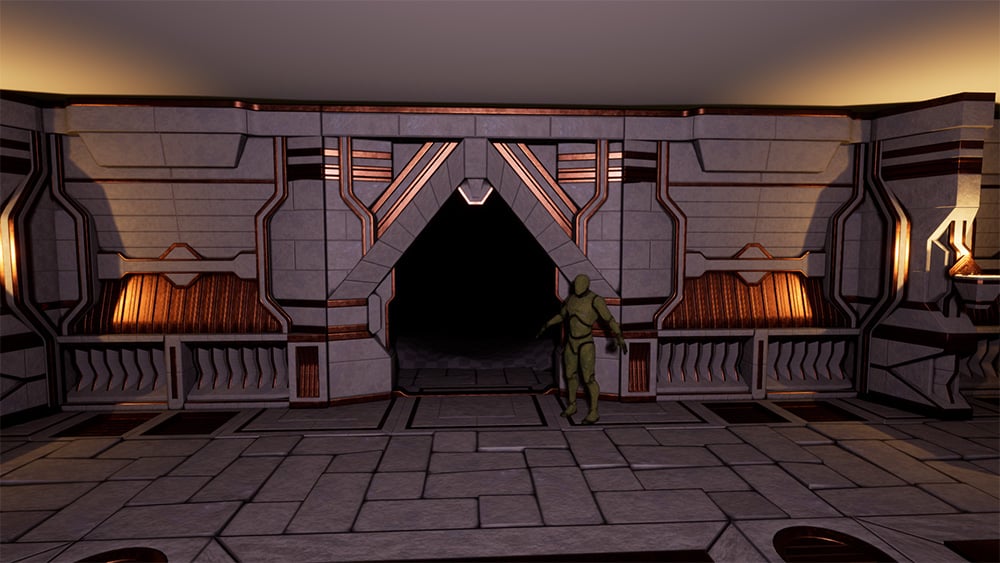 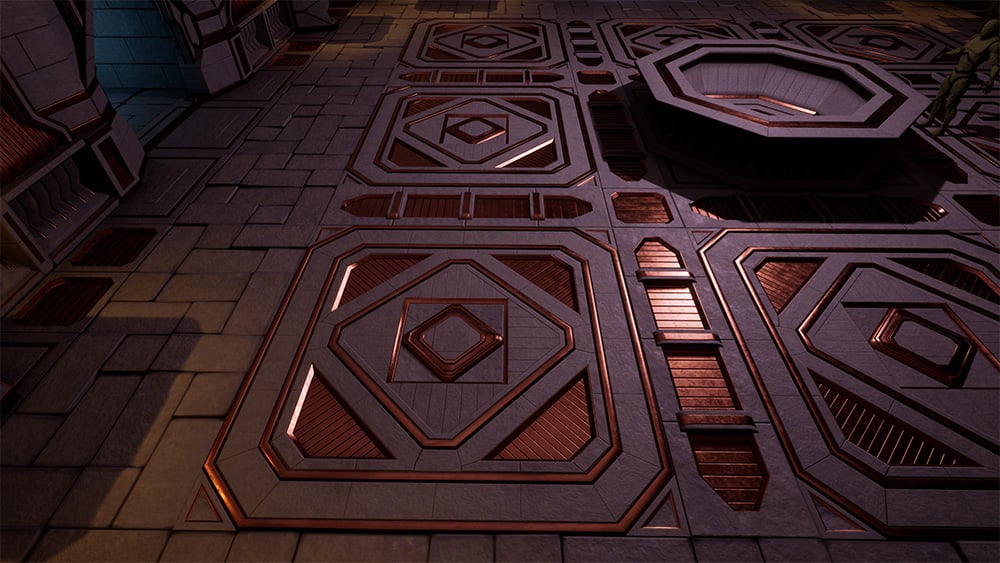 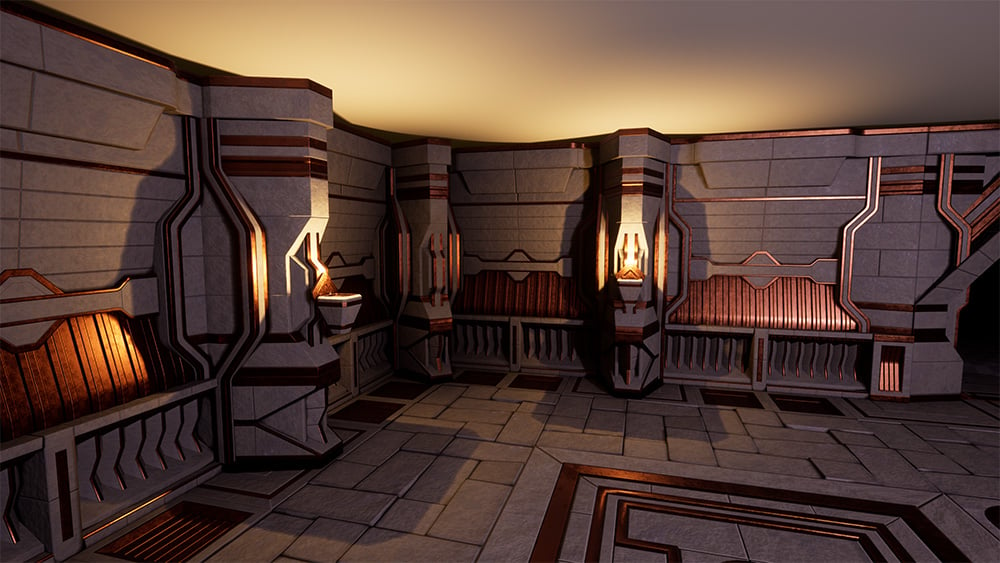 I was struggling to nail down the lighting so I added some volumetric fog to carry the light into darker areas. 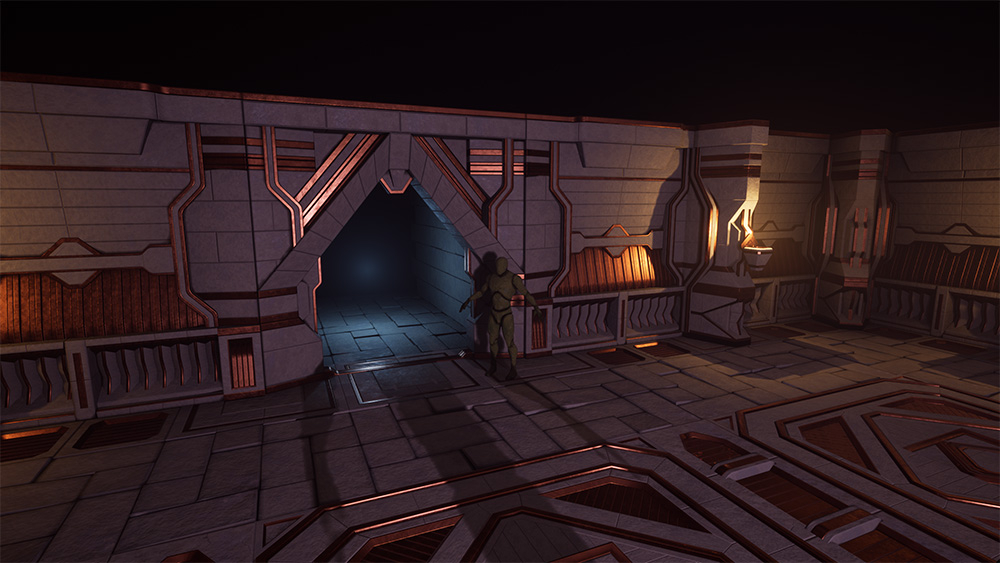 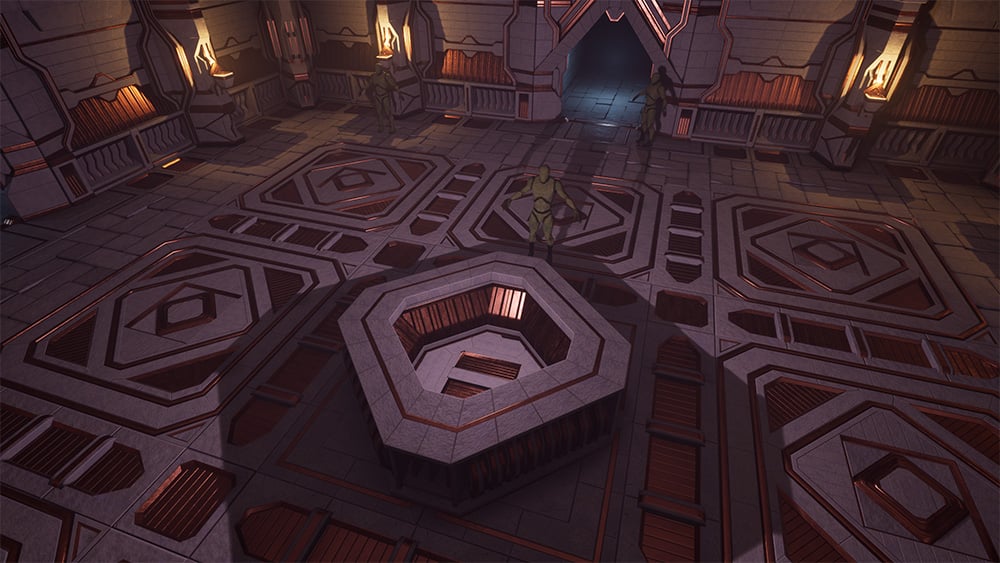 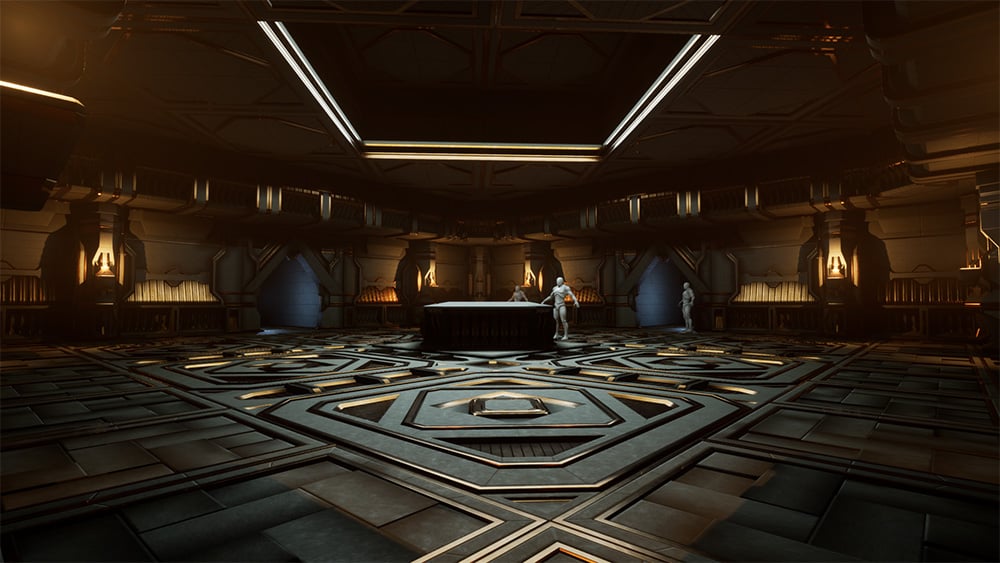 At this point I needed a serious lighting overhall. I just couldn't get point lights and a rect light to work properly. The more lights I added, I started getting the dreaded red X. I switched everything over to emissive lighting. This not only gave me a more even lighting, it really brought out the effects of the volumetric fog. May be too foggy though. 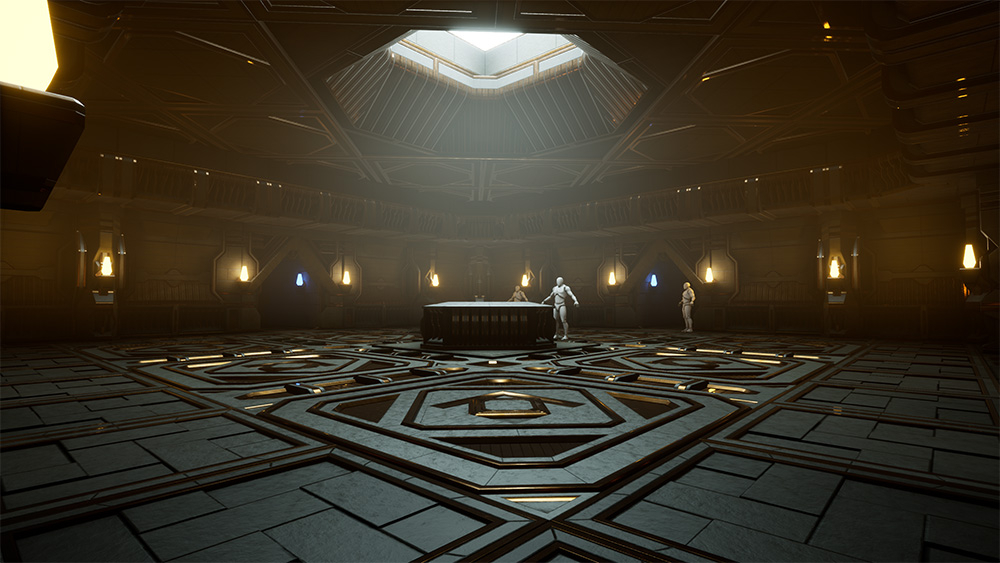 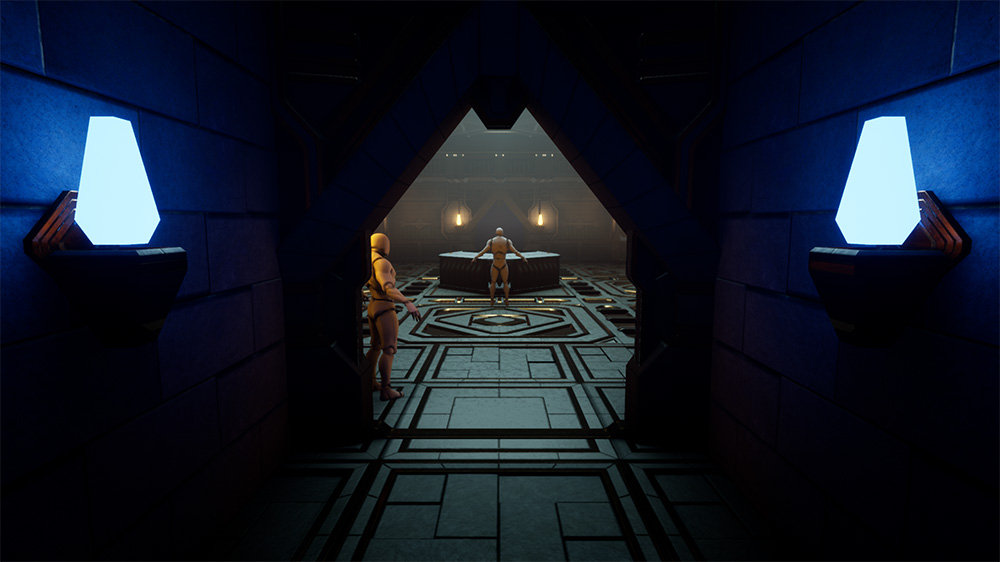 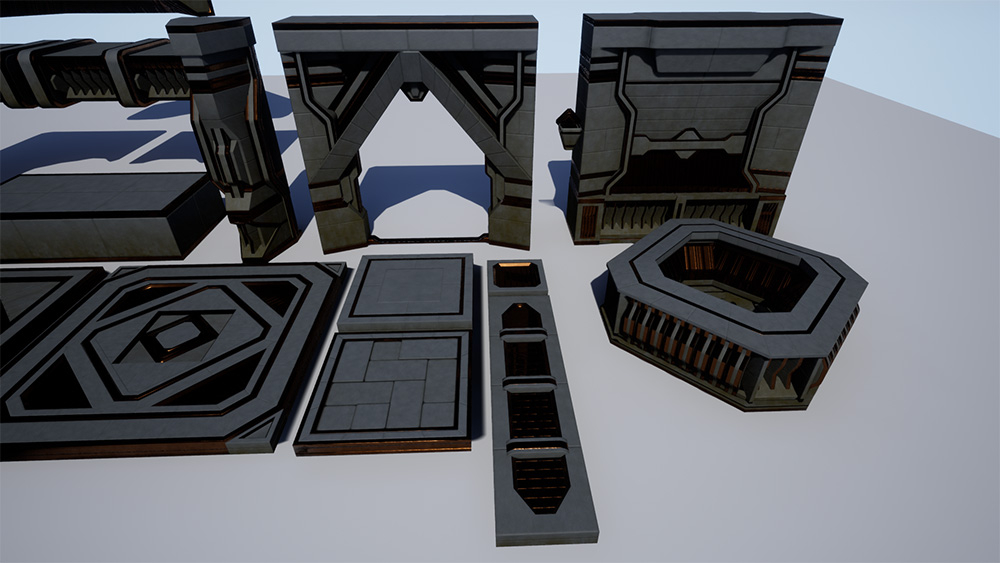 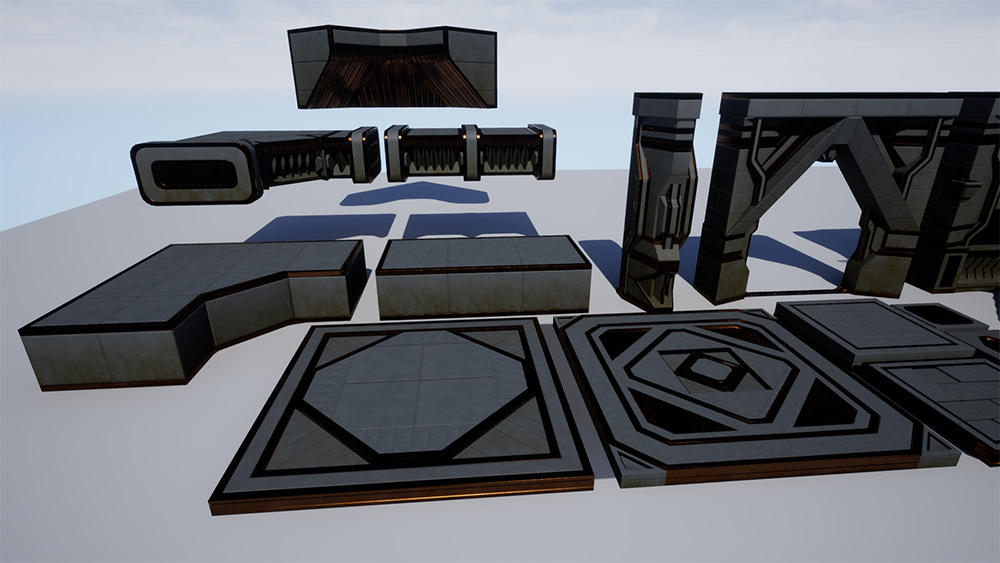 You may notice the grunge applied to each object. I was looking at my original texture and felt I could improve. So I re-did the sculpt for the normal to have a little more edge wear. I also noticed that in the old textures, stretching was a little apparent for my tastes. Stretching is something can fix with geometry, but I tackled it from a material standpoint.
I used a clean base normal for the trim. I created a base diffuse texture (grayscale) as well. This way I can customize the colors of the stone and metal in Unreal. I created a tiling normal for the stone details (pits, cracks, rough surface, etc) and then used triplanar mapping for that. I also created a triplanar color grunge for the color/diffuse. That grunge is also tied to object space coordinates so it's always on the bottom (below the pivot of the mesh). I created triplanar roughness maps for the metal and stone, then blended them with a lerp mask. Metallic is just a normal metallic map. This created a lot of shader instructions though, so probably not something that could go in an actual game. 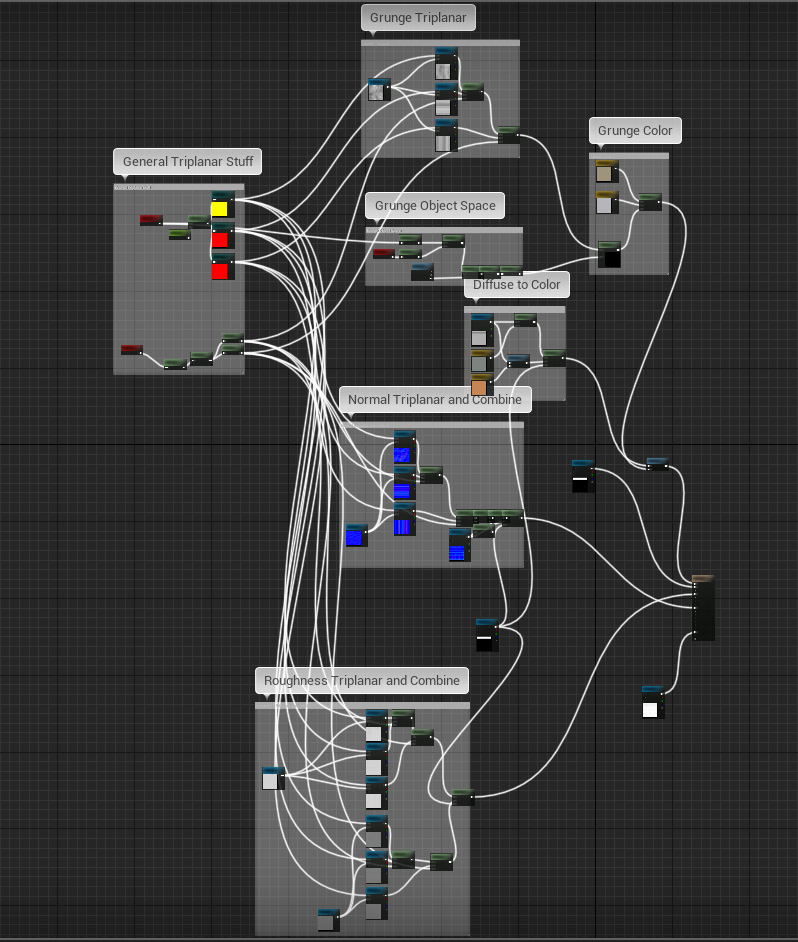 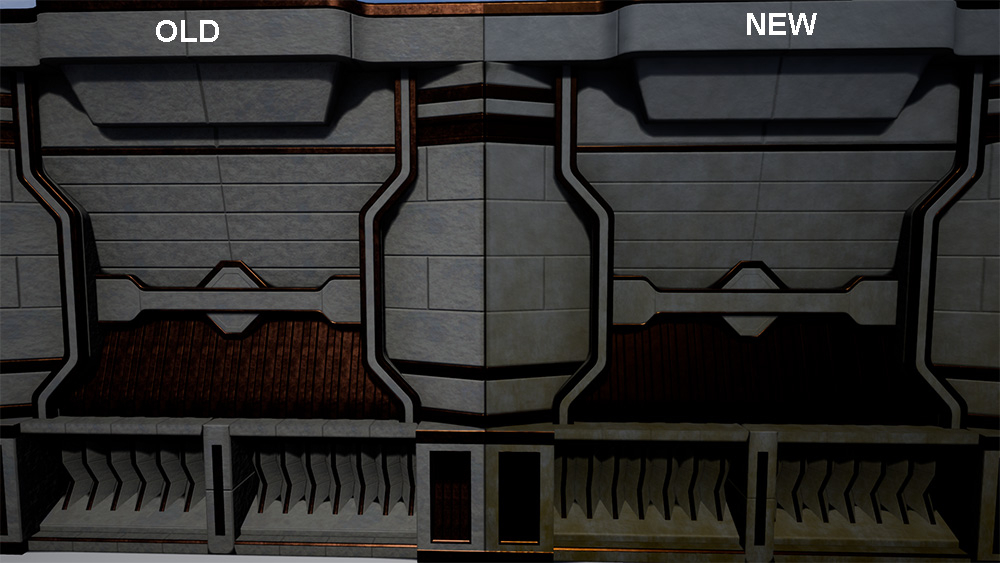 The complex material has it's problems as well, but I think it's a bit better. I'm finding it's very time consuming to add variety to the UVs of just the trim texture. Though it's perfectly possible to knock out some of the repetition of the "all in one" trim sheet. Though if you could afford to spend the memory on a complex material, you could add more variety to the trim sheet. So it's a trade off.
Anyways, thanks for looking. Any critiques will be super helpful. I'm eager to wrap this up and throw it in the portfolio.