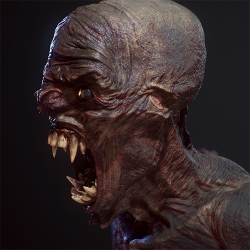 Some new work for Terra, the same game I built the space marine dude for. You can see the game in progress at http://starcave.net. Most of the stuff they have online is older, and they're busy putting together a new demo for GDC. Definitely check them out.

This guy's sculpted and retopoed/Uved in Zbrush, textured in DDO/Photoshop, and rendered in Marmoset 2. He's contained in a single UV space, at 4096 rez textures, and has Diffuse/Gloss/Specular/Normal/Translucency/Emissive maps.