Advice on making my video tutorials

I teach game art and recently started making tutorials for my blog at Escape Studios. I would like to hear any tips or feedback on my tutorial so far, and tips and tricks for making and releasing a video tutorial.

I am new to making video tutorials for a larger audience, and my first attempts are going through many iterations. So, I am sharing some suggestions and will update this thread with my progress.

1.       Is the tutorial worth making? how useful is it compared to other methods.

2.       Name your tutorial effectively and include an eye catching and descriptive thumbnail.

3.       Distribution channels are important! You tube, Facebook and Linkedin have so far been the most useful, but this is going to be down to my personal network. So, advice on this would be very useful.

4.       Duration of the tutorial is important, really good content takes time to explain. Speeding up videos can be intimidating for people trying to follow the material. The idea of a video under 20 minutes seems to have more appeal to an audience, but people will tune into a long tutorial if the subject is of high enough interest.

5.       Keeping the information organised in the tutorial is very important, especially when like in mine includes a few subjects in a single video. I have been making a written document to go with each tutorial and including time stamps on the YouTube video. But consider a shorter and more focused tutorial than an entire development process from poly 1 to final animated asset.

Below is my tutorial so far the first part of a trilogy on an environment art workflow, starting with Zbrush hard surface modelling, then quad draw, UV mapping, Substance Painter and Unreal Engine animation of the final door, I will update here as I learn and make new content.

The video tutorial can be viewed here: 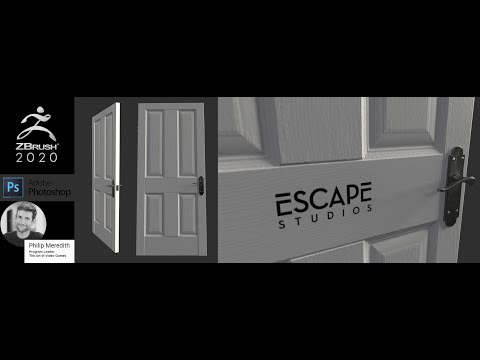 Any feedback on my tutorials so far would be great!

I am also interested in improving the list so any advice on circulating a tutorial and making sure the process is worth while.