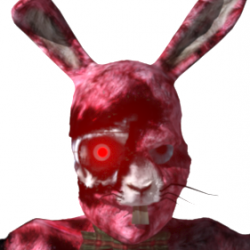 ThomasMelohn
vertex
Offline / Send Message
ThomasMelohn vertex
Sep 2016
I will atempt to finish my First 3d model ever by choosing a Character from my book. The Character is named Rabbit-Fire and is fluffy on the outside and hard on the inside.

He is a Pink bunny rabbit. Stuffed and teddy bear looking. except he isn't stuffed at all.
He is a Robot Cyborg Created by the person simply known as "The Toymaker" A menacing person who takes joy in replacing parts from robots and mechanical entities without powering them down. A.I Torture to be frank. He have maimed and disassembled many many cpu`s though his career. Then one day he pushed Rabbit-Fire too far and Rabbit Simply wouldn't have it anymore. So after the fire died out in the laboratory and what was left of the once so fluffy looking Rabbit escaped he was badly injured and in need of spare parts. He was picked up by another Traveler who took him in, the crazy Gung-Ho kind of trouble he was.

I will use Maya, Photoshop, Mudbox, Charactor Creator and iClone to Model, Texture and animate my Little Fur-Nut. (Because my Character isnt that tall he dont seem to be that easy to model in Character Creator
I will keep you posted.
0 · Share on TwitterShare on Facebook