Author: velja_bvath
Home› 3D Art Showcase & Critiques
Automatic "Save Draft" has been disabled temporarily. This means comments are not being auto-saved as you type. 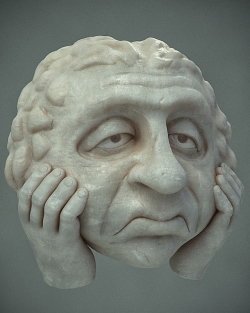 
This is a personal project I've been working on - on and off - for the last couple of months. When I started it was with the aim of creating an entire hard-surface character completely in Zbrush without falling back on the 3dsMax crutch.
I found an interesting concept by Jerad Marantz, and decided to go with it. It's just a single front perspective sketch so I had to design/improvise the rest.

I'm just going to use this thread as a kind of progress report/process on how I created the project. I thought it might be of interest to any beginners or lurkers.

The original character is a 'Marauder' from the Thor universe, so as the initial challenge turned to a full-blown project the character background evolved. There are several Latin derivitives of the word marauder: preadator, and the word I chose for the character, depopulator. So this led to the background story........(which is always a good idea as it often drives your design decisions)

It is the cliched near-future. Earth's population has tripled again, and is untenable. Governments have banded together to brainstorm on a 'final solution'.........Sci-Corp win the lucrative contract....

Sci-Corp Industries has been commissioned to engineer a depopulation strategy with little allowance for liberal footnotes. A drastic measure has been devised: 7 foot tall, genetically engineered mutant-cyborgs!

I started with a pre-built basemesh and just pulled the forms around to define the silhouette. This initial 'clay' can be anything really, a sphere, a Zsphere, whatever. It's not important as I'm just looking for the initial forms/silhouette. Then it's on to Dynamesh concept sculpting.

I just use the basic brushes in the image above plus snakehook and a variation in the clay brushes.
It's mostly just carving/building out forms, sketching placeholders, and pulling things around. The process
is loose and at no time am I being too precious or needlessly noodling on specific parts, which just stunts
the process and wastes time needlessly. This is just the concept and will eventually be retopologised
for the clean, final result.