The Beast - The Cursed Queen 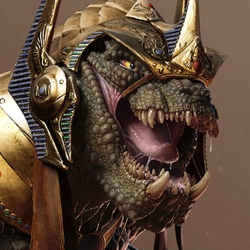 In a time when the land was divided by war, a king was desperate and was looking for solutions to unite the people. All hopes in the gods were lost so the king departed on a journey to the dark places of the world. Eventually he found the devil and asked him for help. The devil agreed, however, for a great price.

He promised a powerful magic for the king, so he would be able to control his kingdom. But in return the devil demanded his wife, the queen.

The king returned home but he was uncertain regarding the devils bargain. He loved his wife and she was a very good queen.

The queen refused when she knew about it. Forced by his people, the king had no other chance than to overpower his wife. Then he brought the defenseless queen to the gates of hell.
The king received the spell after he handed his wife over to the devil. Ever since the king was very powerful and ruled for many years over the land.
The devil brought the exiled Queen into his chambers deep inside hell and locked her up.

After a while the queen lost her soul and transformed into a denizen of hell.

She adopted three traits from the animals, that lived there. A snake, so she could sneak past the devil. A goat, so she could jump up the cliffs of hell. And a lion, so she could tear the heavy gates of hell.
The queen escaped from hell but she was changed forever. Driven by revenge she broke into the Kingdom of her treacherous husband and fought her way through until the throne room.

After killing all the guards, she finally poked a spear into the king and pushed him down his throne.
In this moment her soul returned to her. She then collapsed and was overwhelmed with sorrow for her dead husband.

Since then she was her true self again and the queen was called Q’maera, the cursed.

It's been a great time participating this competition. Many thanks for the support and motivating me to go on. Polycount is a great community for expressing yourself and learning something new. Thanks to all, you folks are awesome!

Good luck to all the participants. There are some amazing art comming and I`m very looking forward to see all the finals.