Author: valentin_baguirov
Home› Reallusion's 3D Character Design Contest 2016
Automatic "Save Draft" has been disabled temporarily. This means comments are not being auto-saved as you type. 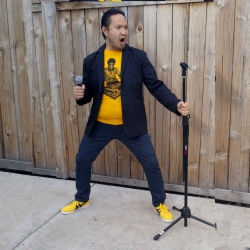 I'm Dano. I'm a cg artist and, most recently this year, a paid comedian! So I started actually producing all the things in my head that I think are funny, including old shorts for the web.

I found out about this contest a bit late, but I'm trying my hand at this anyway. I've been working on a particular short for a few years, on and off, (I thought of it a while ago, but didn't start back up until Noitom had their contest), and then recently found this one...so now i'm back on it.

My concept is a comedy short spoofing all the chef competitions shows and reality TV, so I created a concept called, "Cheffin' Monsters". The main character is Gorgon Ramsey, a world's most successful monster chef. I've written about 3-4 shorts using the characters from this existing universe.

Here is one of the shorts, which I also pitched during Noitom's contest:

Here is a show open for Gorgon's show "Cheff' Word:

I decided to focus on this as my character, using the head I created and utilizing iClone and iClone Character's clothing creation tools and cloth simulators, which are the perfect application for my needs.

For now, I'm downloading the software, and reading docs, racing against the clock of Oct 16th...
0 · Share on FacebookShare on Twitter