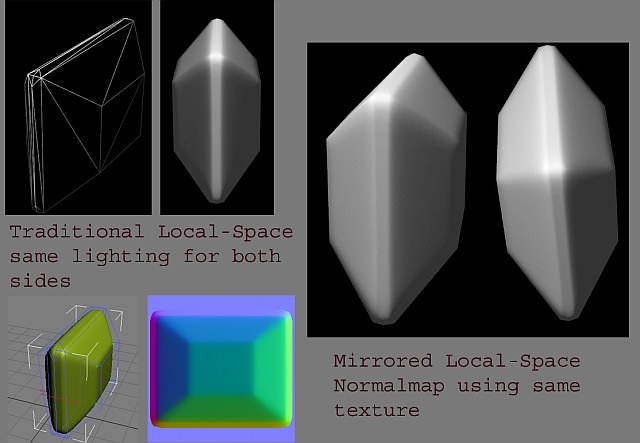 just a little proof that it works

3dsmax exporter (as well as converter from other formats) of next luxinia release will support generating the necessary per-vertex attributes.
I also intend to make a little tutorial about it + showing that it can work with deforming meshes, too. though it will take a while until then.

the mirroring works on any arbitrary axis, ie you dont have to use major axis. The only restriction I am currently aware of is, that making two-sided geometry is illegal (ie I need a bit of volume between sides to detect the mirror plane).

Mirrored parts must lie outside 0-1 and must be shifted by multiples of 1. So that the fractional UV part ( what is after the comma) is still the same as the reference side. This restriction is only because I wanted it to work from any input format, if the technique was directly wired to the dcc exporter where more information about triangle connection and so on exists, another method for marking "outsiders" could be used, but I think this works fine. Afterwards outsiders are actually moved back to 0-1.

As for which format compresses better / has less artefacts on compression (tangent vs local), I dont have proper source art and so on at hands (too little experience on the whole baking stuff). In theory however there are more texture formats for tangent compression I think.