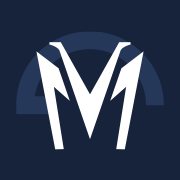 Hi! My name is Marc Vives Dalmau, I'm a 3D environment artist and I wanted to share how I made a procedural house generator inside Houdini, in case it may be useful for somebody. I've been integrating this software to my workflow since summer 2021 and I'm very happy with the results. Hope you like it :)

This project was made for the videogame Oden, which is in early developement state and in collaboration with the team of Rattingham Studios, an indie studio based in Italy. All concepts for this houses were provided by the team and specially by the concept artist Ludovico Brisotto.

The purpose of these houses are to fill the environment but the players won't have access to the interior of them. 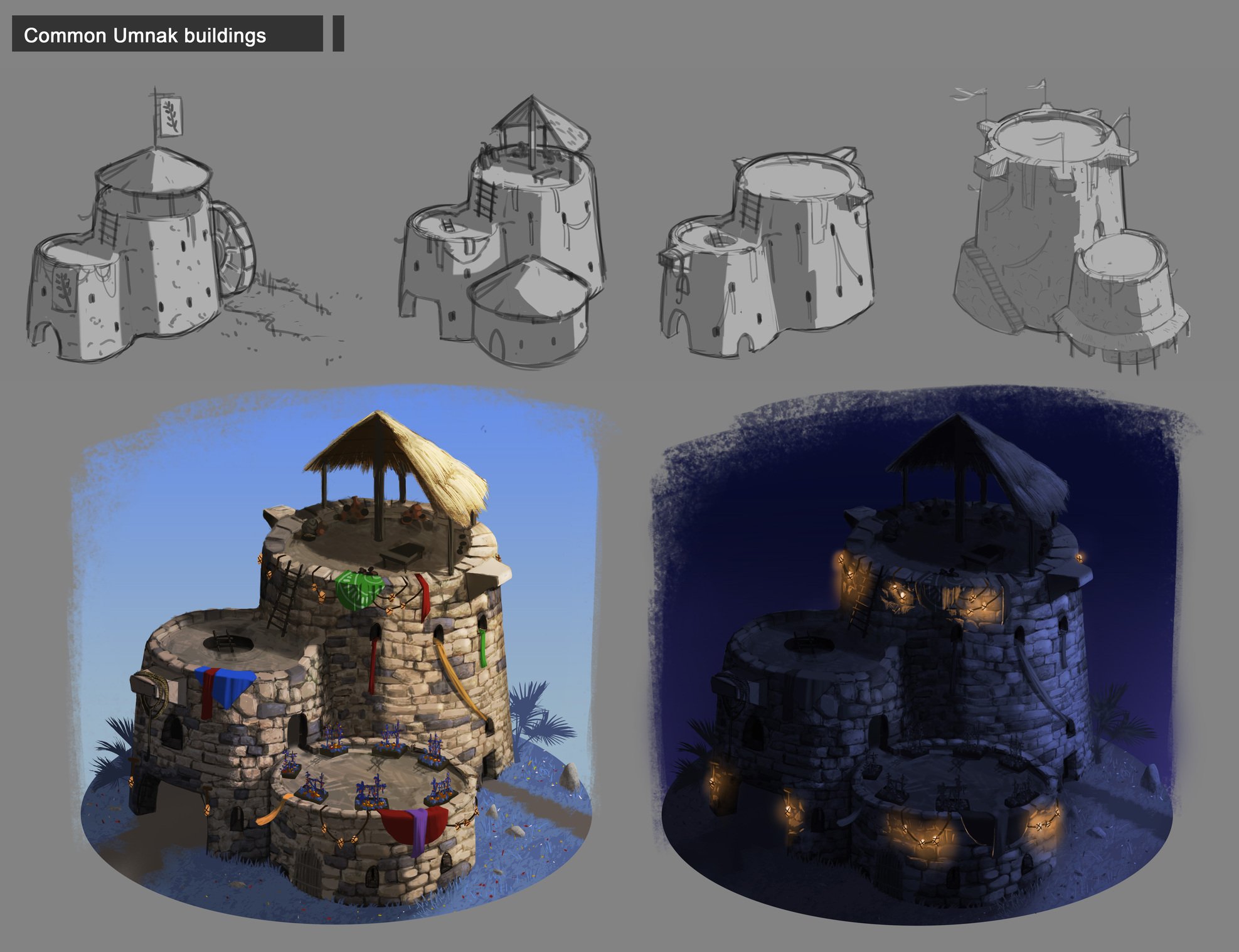 To build this houses I needed to model some architectural props inside Blender, prepare the UV atlas for them and then export to be used in Houdini as instances. 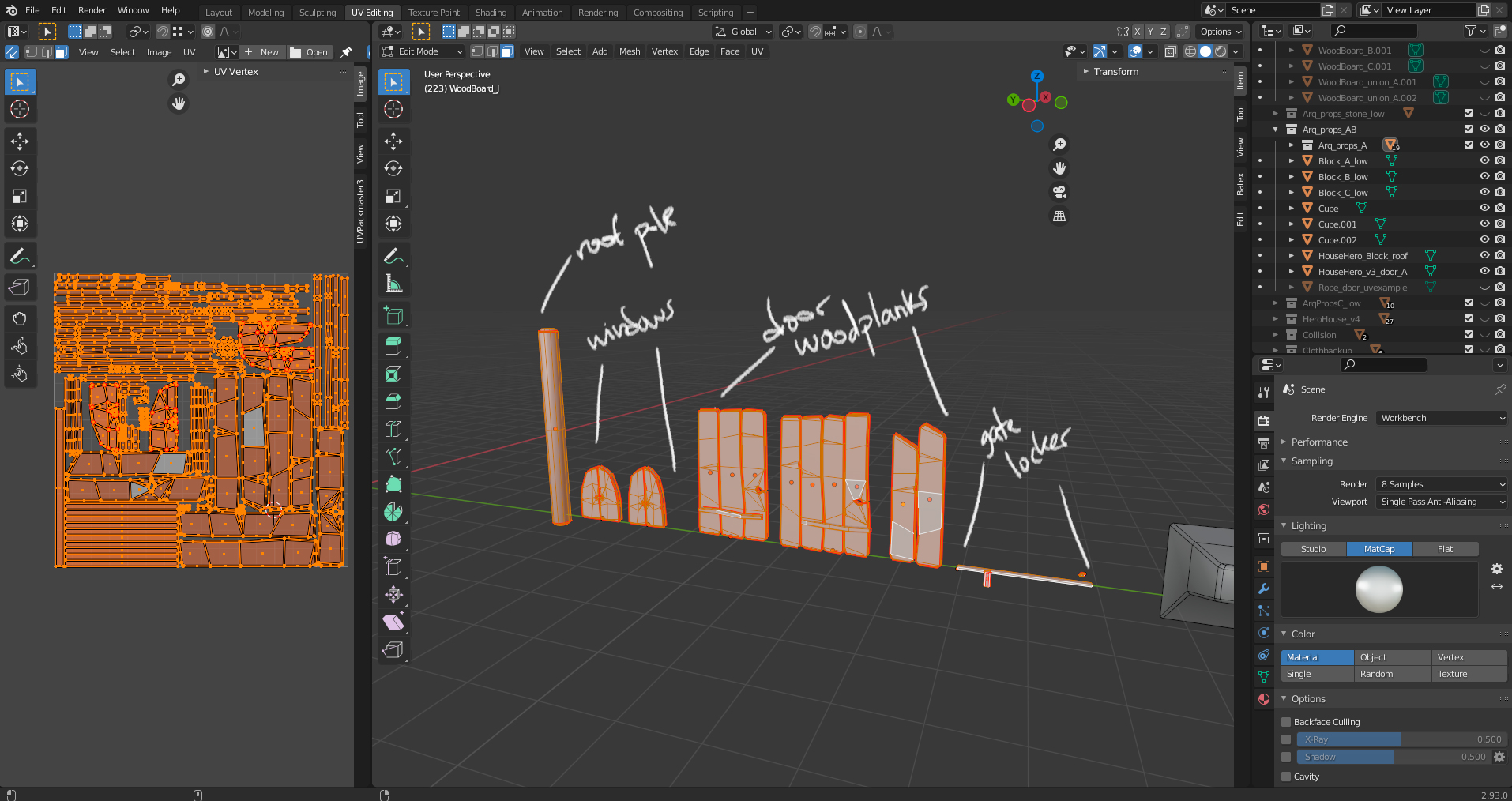 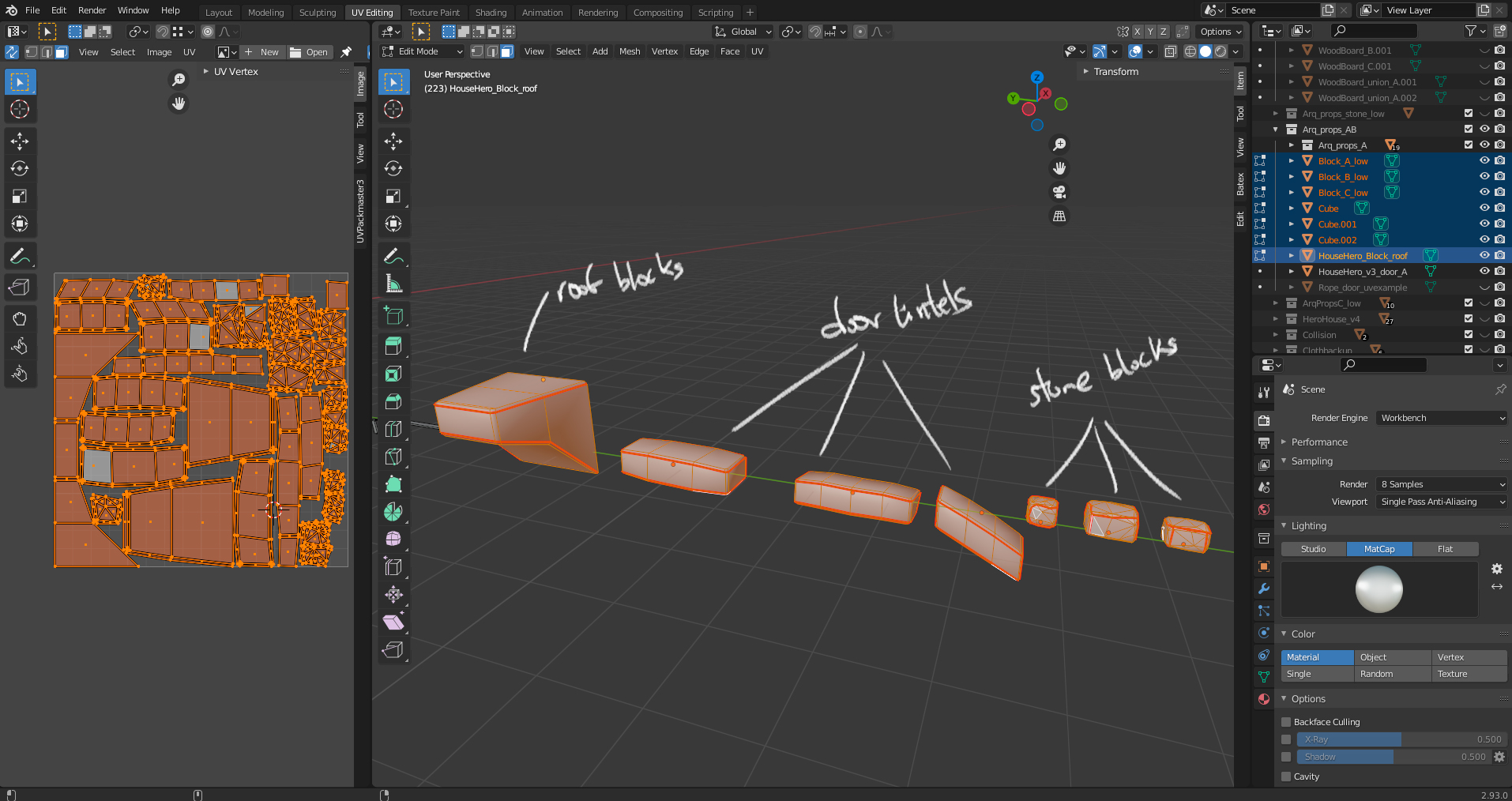 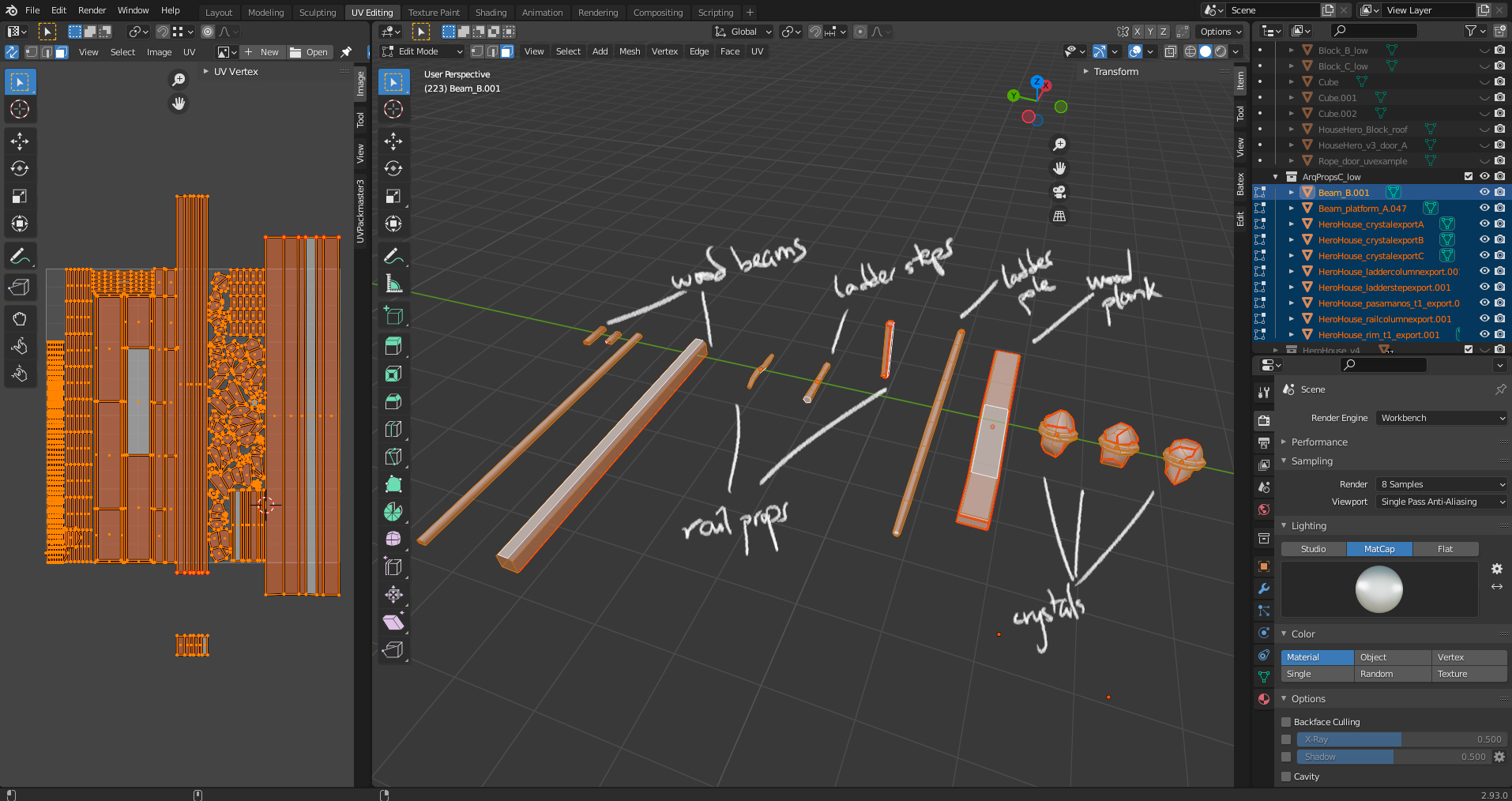 Some of these props won't be used in the procedural house generator, since are props for the interior of the houses and won't be necessary, but I included them because they will be used in some particular buildings which the players will have access to and are more specific, but won't be covered in this thread.

To start I created 3 different tower heights with its UV.

Then, starting from a random height tower, I do a for each loop with feedback, adding in each cycle a tower of 1 height lower than the original one. I do this iteration "n" times, which is driven by a random seed for each house.

Once I have the base towers it's time to define where the windows and doors will spawn, so I created an attribute "type" for all the window point possibilities according to the "y" position and the same for the doors.

After that, I will define the window positions iterating randomly from all the possibilities and preventing them to spawn too near from each other. To do that first I had to filter the points which were already intersecting between towers and the points that face to a roof. Then created a for each loop with feedback to randomly pick 1 point at a time and repeat that "n" times.

Next is the turn for the door points, which I wanted to spawn facing the ground or any roof, and preventing to be too close to the windows or tower intersections. As a special case, instead of a door, a 2nd floor roof can have a hole in the middle of the floor to access by a ladder from the interior to give more variation.

Once I have the points for the windows and doors to spawn, I also need to get the center of the highest roof and get its radius to set the proper scale of the roof when copying. As a detail, in case that the roof that spawns is the "half" one, I want it to be oriented to one of the nearest roofs and not so random.

Now is the turn for the roof blocks, which will be spawn in the highest roof in different patterns but avoiding to be above the other roofs. There's also the possibility to don't spawn any (which is the case of the example i've been showing).

Once I have all points set for instancing with it's attributes for orientation. scale and variation type, I prepared the different prop instances doing some modifications inside Houdini ready to be copied.

For the windows, I created random apperture positions and assigned a variation attribute for each. Then, this value will be used to copy to each window point previously assigned randomly. I looked for almost closed or totally open variations which feels more natural than totally random positions. I also created collision mesh for the windows to be used later for intersections or for the final collision mesh.

For the doors, I created 2 variations (one bigger than the other) and then added ropes to attach the woodplanks. For that I used a simple squared shape and a knot made in Blender and from that I created the ropes, projecting into the door and interacting with each other. Also made it's UV's there.

To create the roofs, I started from a conic mesh did in Blender and a "card" for the straw with their UV's. Then, I scattered the cards along the straw roof.

Then, I need to place the wood poles, which are all the same instance but with different scale according to the rooftop radius and type of roof (half or whole).

Another kind of prop I wanted to add were ropes with hanging crystals. To do that, I started from the roof polygons and then looked for possible positions that avoid intersecting with windows, roof blocks and doors. Then, I gave a swing shape to the ropes and copied to random positions some crystal props I already made in Blender.

I wanted to add a ladder to the roofs which have a hole in it, to be able to climb to the next roof, so they will only spawn in that case. To start, as common, I use the roofs and look for intersection with the hole roof (in case it exists). From that, I create the points to place the steps along the curve and place the side poles too. To add more detail, I also created procedurally some ropes around the steps that attach with the ladder.

Ok, so now I have the points and the instances ready, it's time to place it all together. For each window, door and hole I need a boolean shape to substract from the base tower meshes. So, after creating it I just need to copy to each point and do the boolean substract.

Then, an important step: I wanted to add stone blocks around borders and windows/doors rims. So to do that I made it procedurally, using the stone blocks and lintels I already made in Blender.

First, starting from the gaps that the boolean subtract made I calculated some vectors, angles and distances around it to set the orientation and scale of the stone blocks.

Lastly, for the borders I used the bottom and top polygons from the base towers to resample the points and then, calculate the distance and tangent between each point to set the scale and orientation for the stone blocks copy. Also took profit and extracted the mesh collider for the rims directly from the curve using a sweep.

Finally, I can put together all the pieces build by copying the instances to each point spawn. In addition, for all the architectural props I created a vertex color random variation to be used inside the shader in Unreal Engine.

For the final export, I also setup some LODs, using polyreduce or blasting groups I created during the process specifically for this. Also used LOD4 as mesh collider. 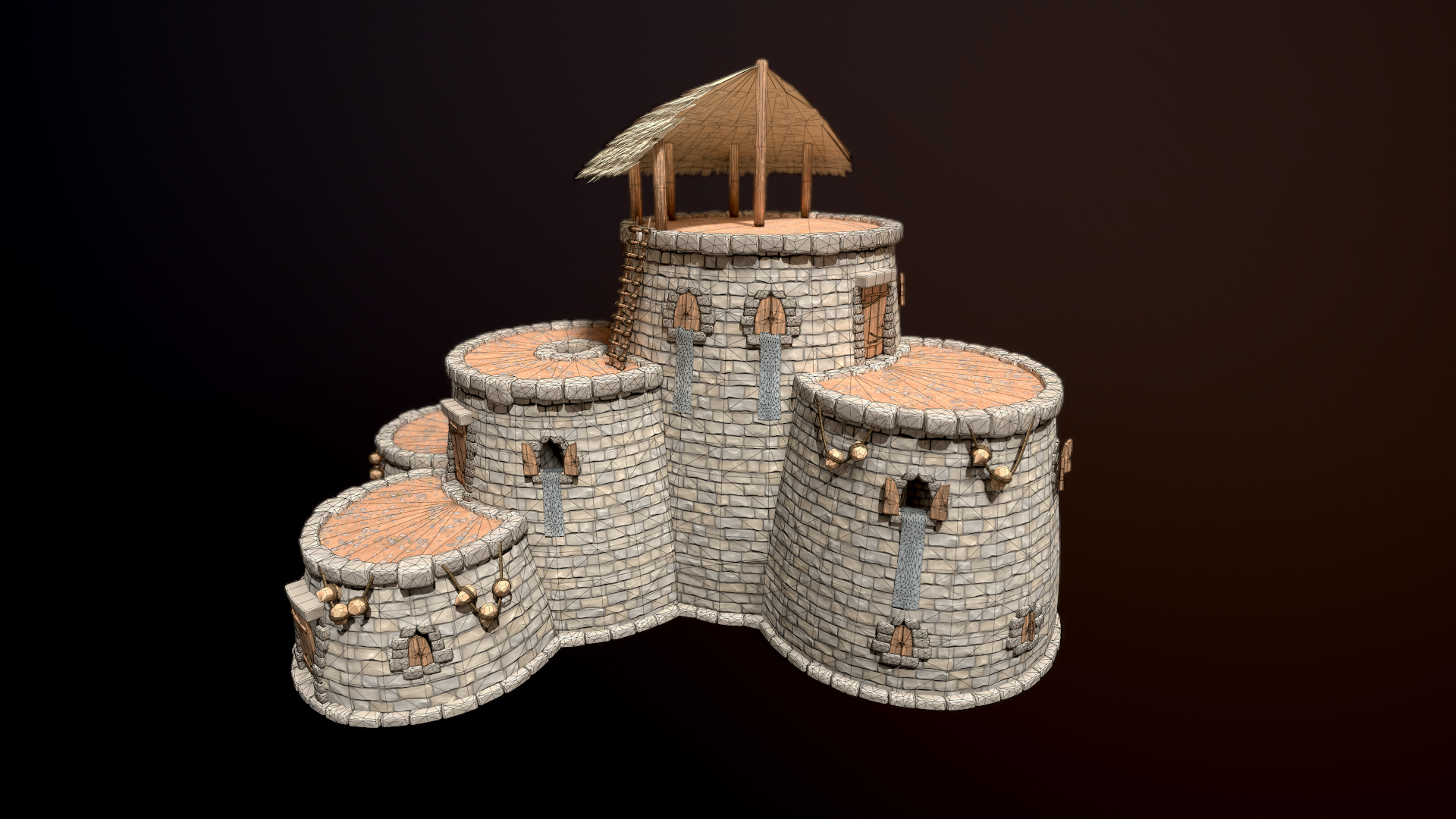 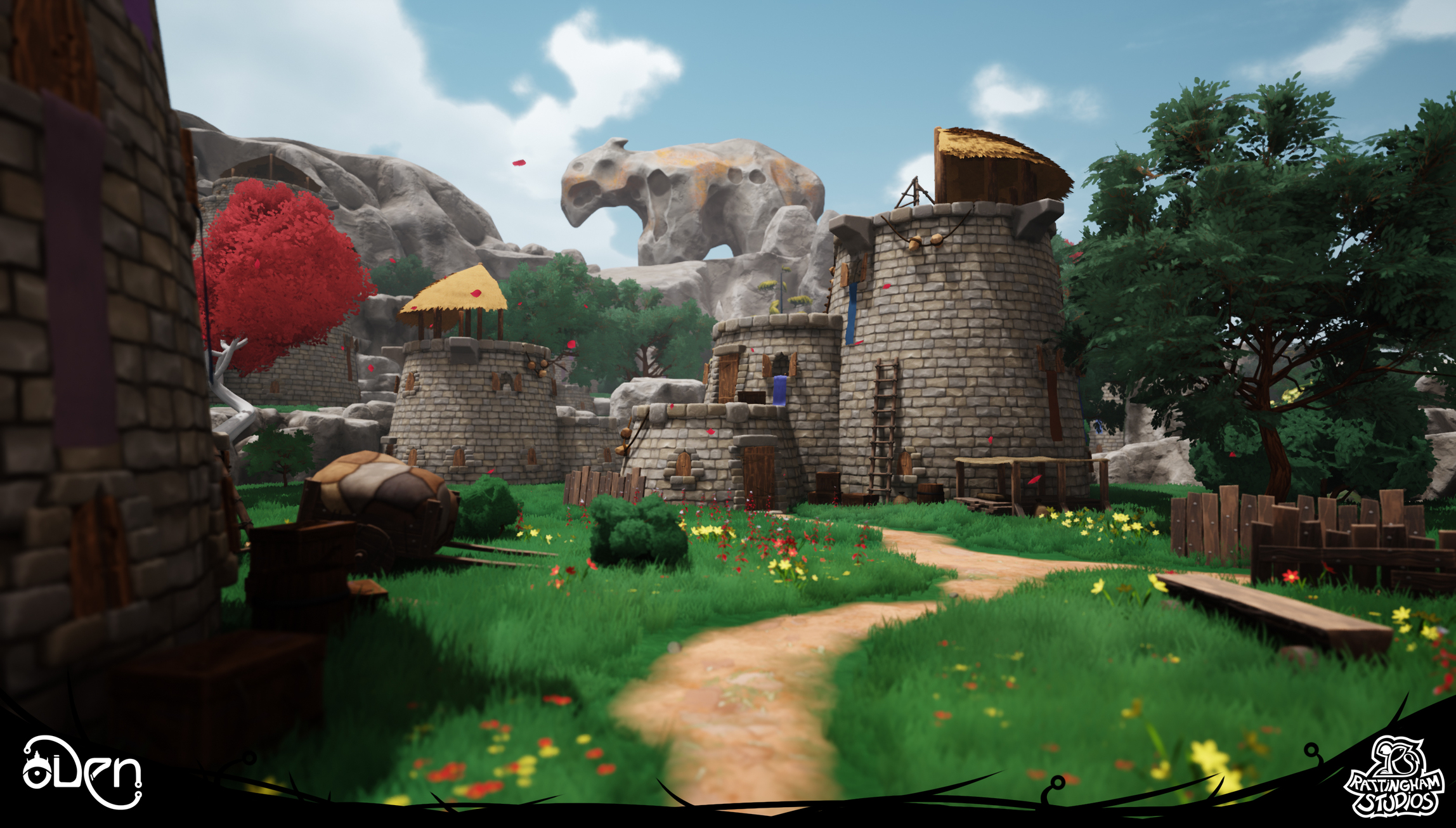 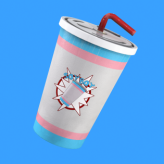 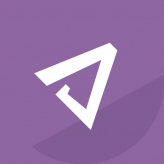