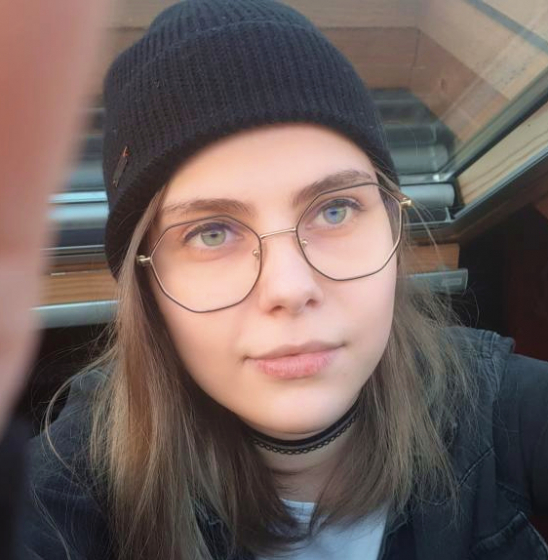 BlueChaos
triangle
Offline / Send Message
BlueChaos triangle
Dec 2021
Hey! I thought I'd make this beautiful concept from Tart / Wyrmforge from Twitter into 3d for my portfolio. I had been thinking of that first character for a while, I really love everything about them, so I was really happy when I got the permission from the original artist! 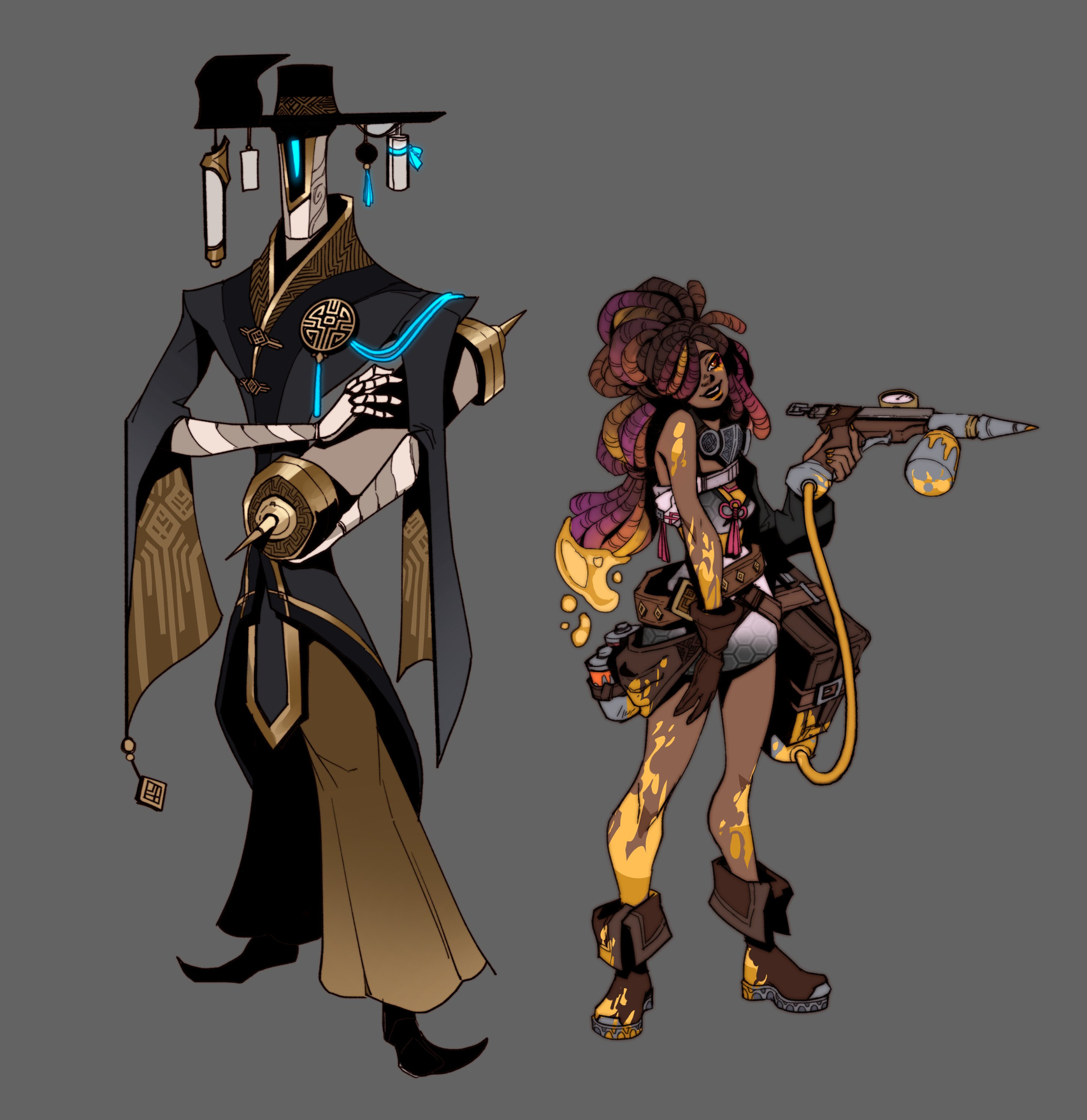 So let's get started then!

I was a bit intimidated by this project, so instead of starting it by gathering references and boring myself, I jumped into maya to already start blocking it out so I could get myself invested. I really really love the shape language that Tart used in this, so I definitely thought the block out would be an interesting phase.

I was planning onto drawing this guy a reference sheet at some point, but for right now I just put the reference image into maya to be able to work on it.
I started work at 04:30pm and stopped at around 06:10pm, meaning I worked for about 01h40.
This is the result. I don't think I'll be doing the reference sheet in the end, since this came out pretty alright. 3/4 and side views aren't included, they're pretty straightforward. 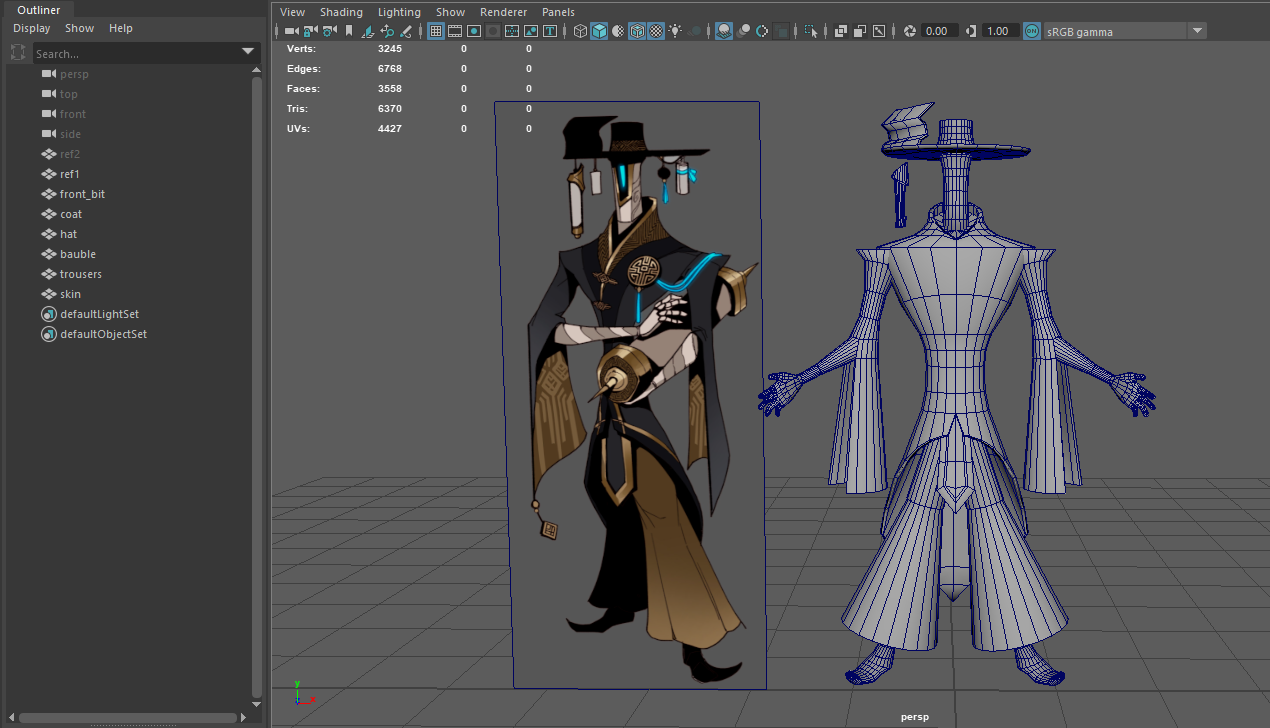 I probably spent too long on this but I really like having a clean base before jumping into Zbrush, as I don't like using it for big shapes and hard modelling. To block this guy out, I used a mixture of overlaying shapes onto the reference and working in a symmetrical manner. The sleeves look like they'll be a bit of an issue when working on the coat, but I'm sure I'll be fine with some masking.
I reused the hands off of my Mushroom Shaman model, but I'll be detailing them and shaping them again so they end up being a bit more unique :]
Here's how I'm going to break up my work, and the notes I have about it.

-🧥 Coat: sleeves will be hard, use masking. Back of coat was made up since not present in reference, play with it to see what you like but remember it won't be visible in the main beauty shot. The way the coat closes looks asymmetrical, so work on it last after breaking symmetry. Make the 💍buttons afterwards in maya.
-👖Trousers: Pretty straightforward. Play with the flare on the end.

-👒 Hat: I'm not sure what the flappy thing on top was supposed to be, so I gave it my own spin. Play with the shape in Zbrush!

-💀 Skin: The head is more geometrical than the cylinder I made it out of, I'll try use the trim dynamic brush to achieve the right shape. Gotta make an indent and a rectangular shape for the light in his head too. Make the hands more slender. The details on the arms can be made with just a dam standard I think. The shoes are quite simplified in Tart's artstyle and I feel like I already got close enough with the blockout, so minimal work will be needed.

-💍Baubles: the one present on the pic will get details in Zbrush. The three other head ones will be done in Maya, as well as the sleeve one, the chest insignia, and the coat buttons.
-📕Scroll: Was originally planning onto doing this one in Zbrush but the shape is simple enough, I'll make it in Maya. The end bits look circular but also square-ish so i'll have to figure that bit out! Will probably do a mix of the two

I'll be doing most of the detailing in Substance painter simply with a height map :] I find it more pleasing


Life is pretty busy outside of modelling, and I'm also sculpting one head per day so I'm not going to update this place very often. I can't wait to see how everything will come out though!
Next step, I'll be taking this guy into Zbrush and giving him a general fix, before seeing where motivation takes me ;] See you then! ✨
0 · Share on FacebookShare on Twitter