tester1225
polycounter lvl 5
Offline / Send Message
tester1225 polycounter lvl 5
Nov 24 2021
So I have a scene that is dynamically lit, but the few static meshes that I have in the scene seem to have artefacts: 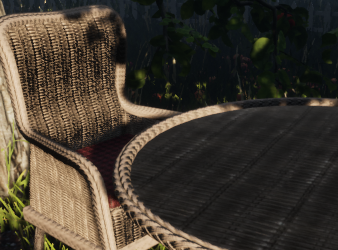 1. Tabletop seems to be just one block of shadow - the mesh normals are pointing in the right direction, UVs seem to be ok, making the material double sided had no effect. The assets are sitting under a thick layer of tree, so I moved them into a spot with clear lighting - still the same issue.

^ this I suppose I can brute force with a fake light pointing at the table?

2. The chair receives black spots that only go away when I zoom in. Problem - I have a couple of shots that have the meshes in the midground, where the black spots look very unsightly. UVs and normal are clean, I've went into the textures and turned off mipmapping, no change that I could see.

Not going to lie I'm rubbish at lighting and don't enjoy it lol Baking wasn't an option as I have a lot of live foliage. Followed a tutorial to set up your basic light source/skylight/fog lighting, just getting these nasty artefacts now that obviously weren't part of the tutorial LOL! Anyone have any pointers on how to fix this? Cheers