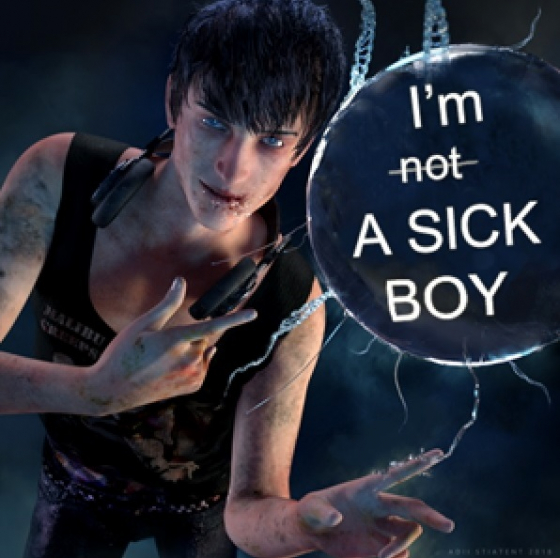 The project started as a video game concept a survival horror x beat' em up and I'm still open to the idea of it becoming a game,
so honestly someone with interest in game development would be ideal!
(more on the project below).
Would be great to figure our creative chemistry and become friends first before jumping into anything.

I'm also a digital artist, studied Game Design at FIEA, graduated from the Art Track with knowledge in software such as Zbrush, Maya, Photoshop, Unity 3d. I enjoy brainstorming game mechanics, writing narrative & human character design.  Many ideas of mines started as Game Concepts. On my own it became easier to pursue webcomics on seeing a thriving market on sites like Line Webtoon and Tapas. These webcomic sites have payment programs so all earnings will be split 50/50 between us. I always leave lots of creative space, and I'm quite flexible with ideas as you also deserve to be equally invested in exploring your creativity.


AS A GAME  CONCEPT
The webcomic in question was based on a survival horror x beat'em up video game idea where the the player (three characters) suffered an ailment that:
(1) made them carriers of a virus that would infect other mammal based lifeforms within social distance. Those infected would mutate instantly into monstrous from. Groups of monsters multiples of 5 can combine and stack in power and size  increasing the game's difficulty (think the Thing horror movie). The combined creature has a chance of gaining traits of multiple species eg. if an infected bat or giraffe in a horde of infected humans. It also makes rescuing survivors a challenge as you also have to avoid infecting them. As a creature designer, there's lots of room to go wild. The concept was that the creatures evolve overtime to better adapt so you can take this as far as you want.
(2) a side effect of the ailment causes the three heroes to each control a state of matter (liquid, solid, gas), they come to better understand these powers overtime. Environment puzzles and combat would involve their individual and combined abilities.

Below is a sample image from the comic (note once you are on the project, both our names appear as co-creators on all media) 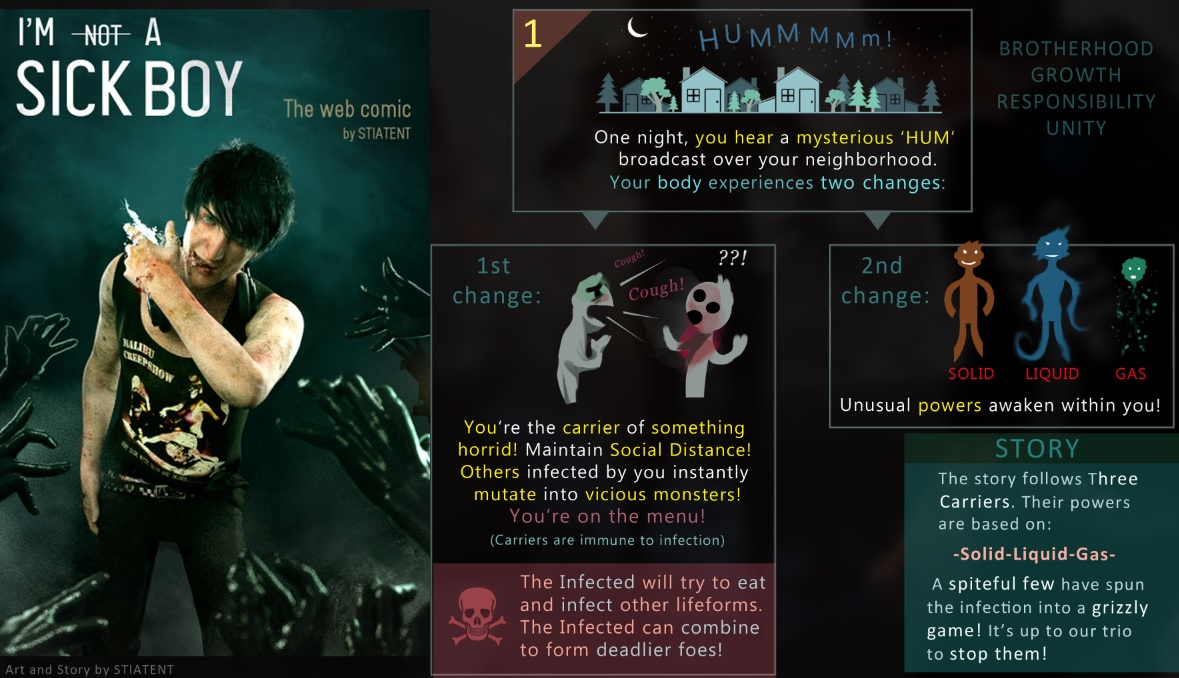 AS THE WEBCOMIC
While starting the comic series on Tapas, seen here: https://tapas.io/series/notasickboy/info

I left creative room not only for the monsters but for other characters too. Aiming for about 2-3 seasons. The first half of season 1 focusses on the initial three game characters, two young brothers (gas, solid) and an ex-assasin (liquid), while I already hinted/showed some basic monsters remember that the monsters evolve in shape, mannerisms and texture to adapt- therefore those designs aren't set in stone. Those shown came as a result of the sound, the upcoming chapter the brothers discover they can infect people. Another major element in the comic is the presence of others sharing the trio's symptoms (superhumans) that still fit within the original concept. The majority are caught up in a game of 'last one standing': hunting and killing each other and infecting helpless survivors in their path (think along the lines of The Purge). This also leaves creative room for other superhumans if you desire. The reason they are driven to kill each other is because they are under a state of hypnosis, something orchestrated by the main antagonist and linked to the news report in ep 3 (link) about the 'graffiti artist'.

The superhuman class would range from those with and without combat skills so lots of possibilities assassins, military, newspaper delivery guy etc.  Narrative wise all the superhumans including the trio were already carrying the genes that became activated when the mysterious 'Hum' in the illustration above was heard. Only they are immune to mutating into monsters but can still be killed by the monsters.

The concept of superpowers was also meant to revolve between gross, gritty and creepy, staying in line with the monsters.
Eg.  Evan (from the aforementioned trio) has the ability to calcify his Saliva to make melee weapons (Solids):

Other Inspirational themes:
Nautical and Pirate lore were influential when coming up with the environment, so there's room to explore those if your also a fan of those themes. Frequency (sound) as a device to augment humans is inspired by various ancient mysticism eg. Vedic culture. The 'virus' is also sound based with the superhumans emitting an inaudible frequency that mutates others into the monstrous form.

To save time, I've relied on Daz 3d and Cg trader for mundane & urban props and modify those that need to look more unique. Therefore the comic is manageable.  If you can rig your creature designs that would be a plus, these days I've been rendering everything from Daz 3d- based on our discussions we can either import your creatures to Daz  or we can use Unity 3d to set up our scenes also. I can always help you with texturing tasks. I'm fine with lighting, putting the scene together, posing and rendering, PR stuff. Daz uses a different rigging system, so I can always rig it there based on our discussions.
Laying out the comic format is something I plan to experiment and improve on going forward, If you have a better eye for that it would also be helpful.  I've also been looking at motion comics which is something we can discuss, to have our projects on spaces like YouTube, TikTok etc.

Timeframes
At the moment, I've been uploading once a month, with 1 episode being broken up into 4-5 webcomics. The webcomic's inclusion of advanced creatures can occur early-mid next year and the group of superhumans for 'last one standing arc' can occur after mid next year.

As an alternative, I have a shorter Cosmic-Horror Scifi project we can always brainstorm.

I currently Reside in Trinidad (Caribbean), I studied in the US and travel there frequently, an Ideal Co- creator would be an adult who can travel/resides in US and Canada and can meet up for events if this becomes something big.
Someone professional, who takes their art seriously. Someone who can participate in meetings via videochat. I rather see who I'm talking to vs someone anonymous. Someone with formal education in Digital Arts would be great but if not at least someone who can work within timeframes. I work fulltime also and understand you'll have other commitments.
Someone who can communicate in English.

Optional: The New England States and Newport, Or were influences for this project so that would be fun having someone from there or similar European countries who are willing to explore/share their cultural knowledge.