Making of "The Harmony"

Hey guys, I would like to share my recent personal work, get some feedback about it and also shate my workflow used on this one. As a part of my hobby, sometimes I get to do something in 3D and render it out. I decided to do a short excercise, which in the end took about 15 hours or 2 days. A big part of this was building lightning in UE4, as it took about 8 hours. My aim here was just to create something, not to improve in specific area. I used software like 3DS Max, substance painter, World Machine, and Photoshop. At first tought I wanted to create just a native american teepee, so I went over some references and started to model in 3DS Max. I began with some logs, which I then adjusted into desired shape. Applied a basic cylinder shape and reduced the number of faces. Going on, I added some details, logs, ropes and so on. Interesting part came in modelling the tent with cloth modifier. I was thinking about trying out Marvelous designer but it was worthless for a piece this easily doable. I was also in need of terrain, for which I used Wolrd Machine and imported the model into Max using heightmap. 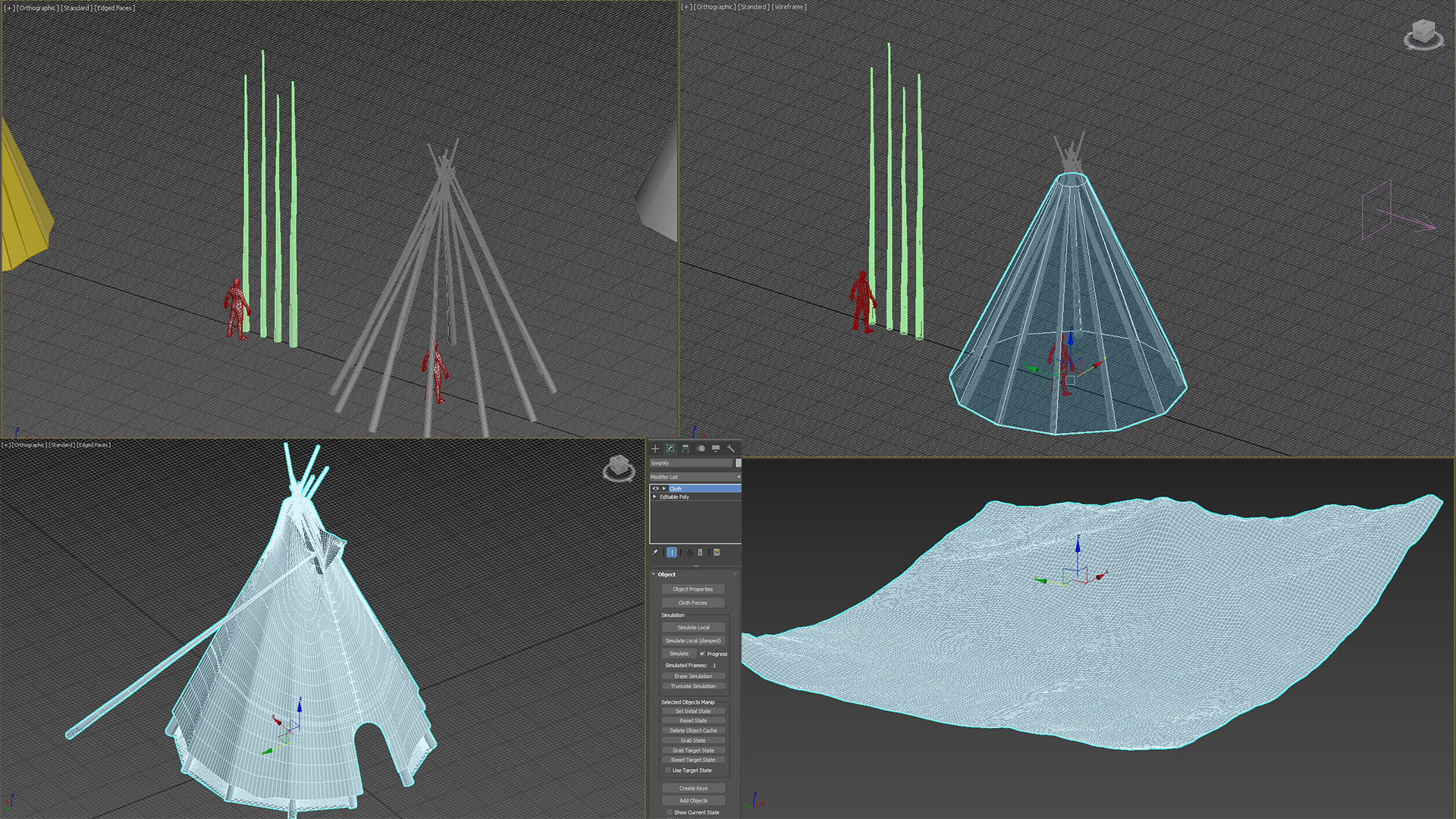 At this point I wanted to take it further and see what texturing could achieve. I was hoping to do also a highpoly version of teepee, but I was unable to work with fbx file and sculpting in Blender. Instead I decided to do additional normal maps in Substance painter. I added folds, materials, dirts and was pretty happy with the result.

With all set I decided to move into Unreal and test things out. Altough bit rought, textures were quite nice, therefore I decided to add the rest and render it out. 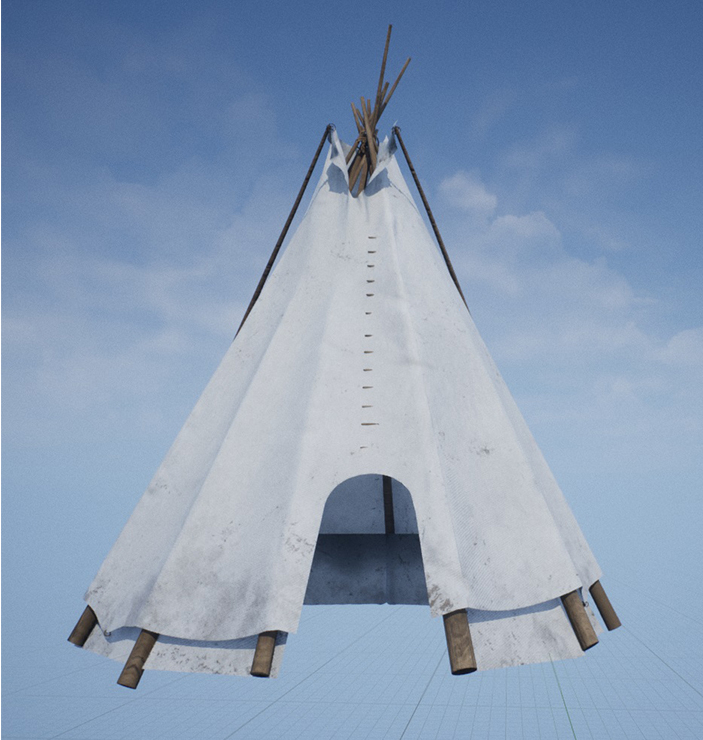 I had the models and basic textures in Unreal, but  I was still missing trees, leaves, grass etc. I decided to go with free assets from Unreal marketplace, so I would have to model everything myslef which would make this proccess much longer. Using the foliage mode, I had trees, grass, rocks. Additionaly I created some details, such as fireplace, ribborns, added post-proccess, fog. This also caused some issues with memory and rendering time. Few test and I was ready to build production lightning, which, due to streaming pool budget, took over 8 hours.  In the end it was looking quite neat, but was still missing something.. 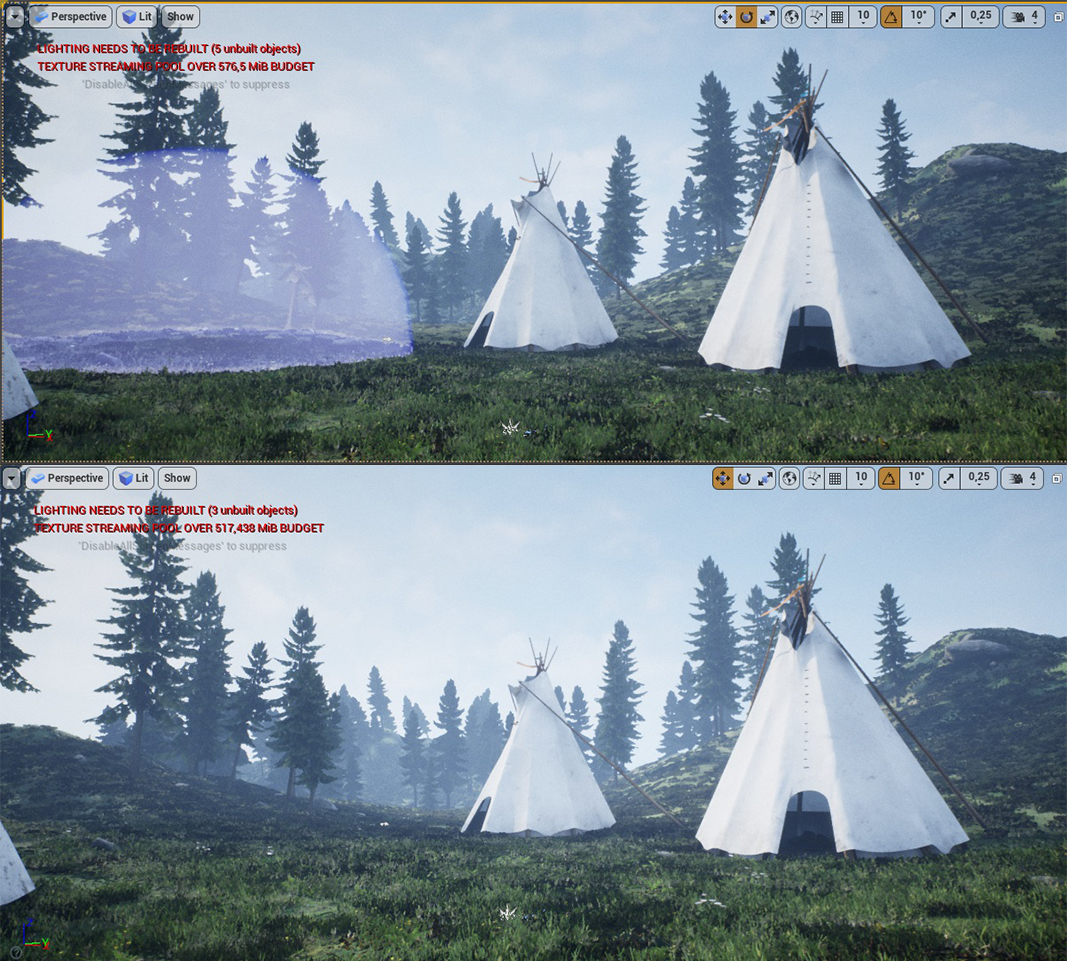 I wanted to get close to reality, as much as possible. I was time to take this into Photoshop. I knew I wanted to experiment with overall light, so adjusting the brightness and contrast and levels did the trick. I also did 2 versions, but decided to go with the colder one. I realized at this point that I want to express harmony and cold quiet mornings. More adjustments, brightness, vignette effect, color adjustments. I also realized that top opening are maybe a bit too small, but the overall mood and coldness evoked, at least in me, this majestic feeling and peace. Good to go, I still had to fix some artifacts, such as flowers, which rendered black. In the end I added more details, smoke, shadows, adjusted the overal image to evoke cold. It was not my intention to do an image which would come out this fine. There was only a spark of an idea, doing something to exercise a bit. Combination of textures and Unreal really made this simple project stood out, therefore I decided to finish it. Overally I am happy with it, altough it seems to be a tiny project, which could be done in a matter of hours. Hopefully, if you are reading this, this is a proof that even a small things requires a lot of work around it. The image itself seems calm and quiet, but cold at the same time. All together this took about 20 hours but I belive it was well worth it for the results it came with.

Critique is welcomed, so maybe I could shorten the production time in future, or maybe the image is missing something, let me know.
0 · Share on TwitterShare on Facebook
Tagged:
Sign In or Register to comment.