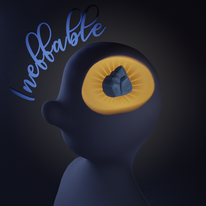 During the last month, I started working on my first full environment as a side-project and figured it would be a good time to start posting my progress to get feedbacks and review what I've done (it's a good way to stay motivated).
My goal was to learn Unreal engine and try to gather in a single art piece everything I've learned since I started 3D art last january (prop modeling, texturing, composition, lighting...).

Since I wanted to practice my ability to make lots of stylized props in a small amount fo time, as well as learning lighting in Unreal, I decided to make an indoor environment. As I was scrolling my artstation, I felt on this awesome concept by Arthus Pilorget, which has been reproduced several time ever since and decided to go for a boat interior scene.

The plot is a following: Life on the ground has become unlivable for many reasons urging the main protagonist to start leaving on the sea as an outcast. As he cannot go back on the ground he had to make the boat as livable and cosy as possible, and to find ways to cope with lonelyness.

Here are a few unreal renders of my current progress: 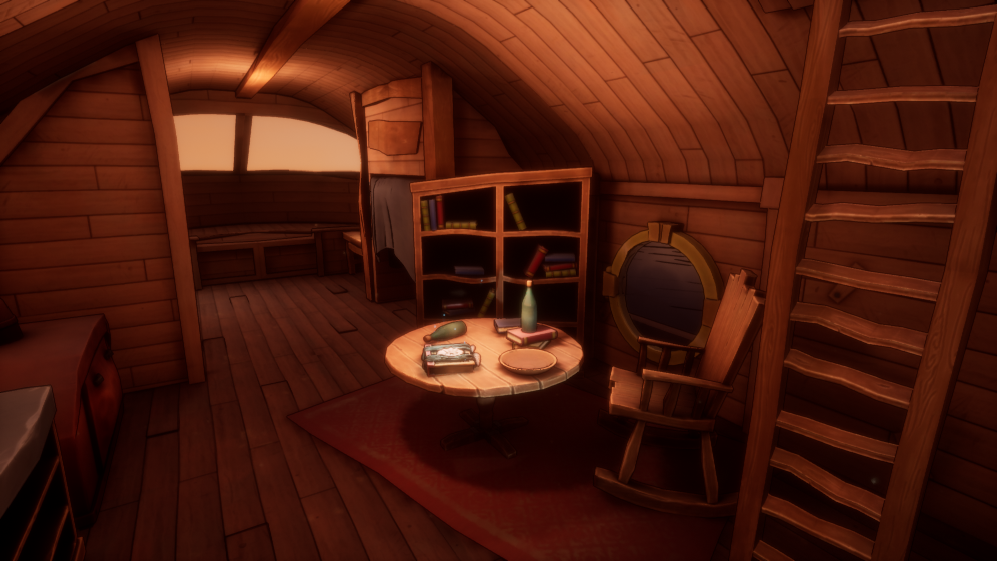 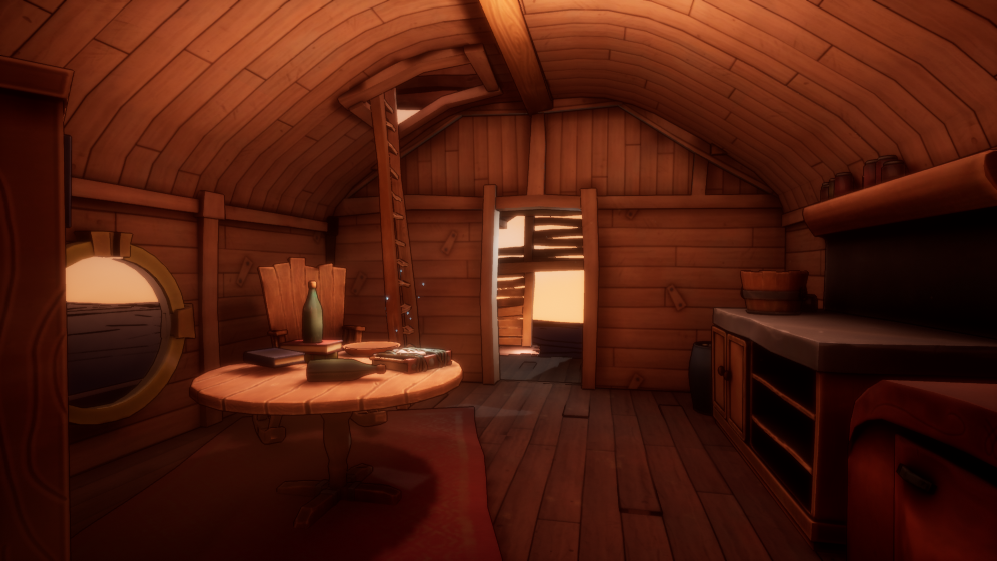 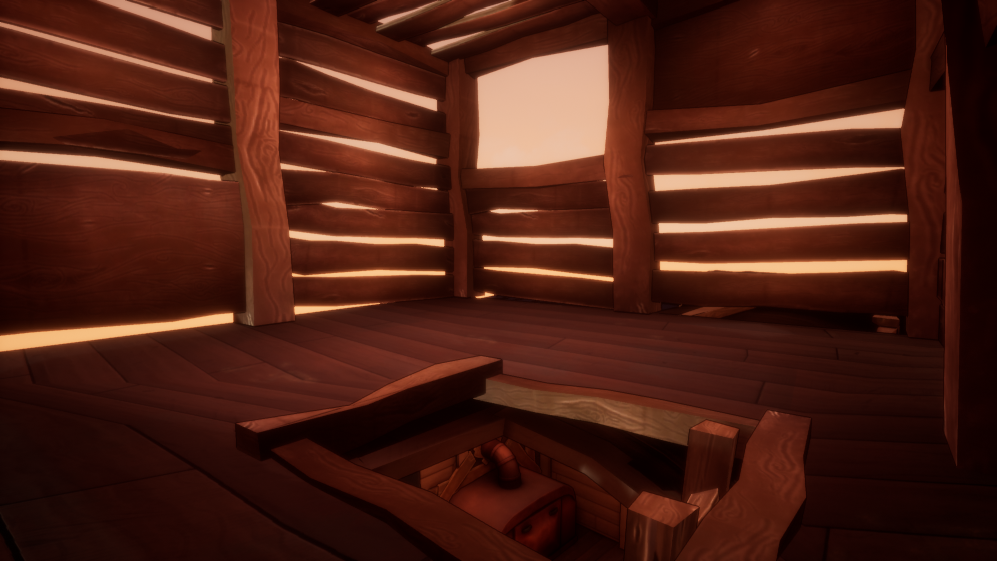 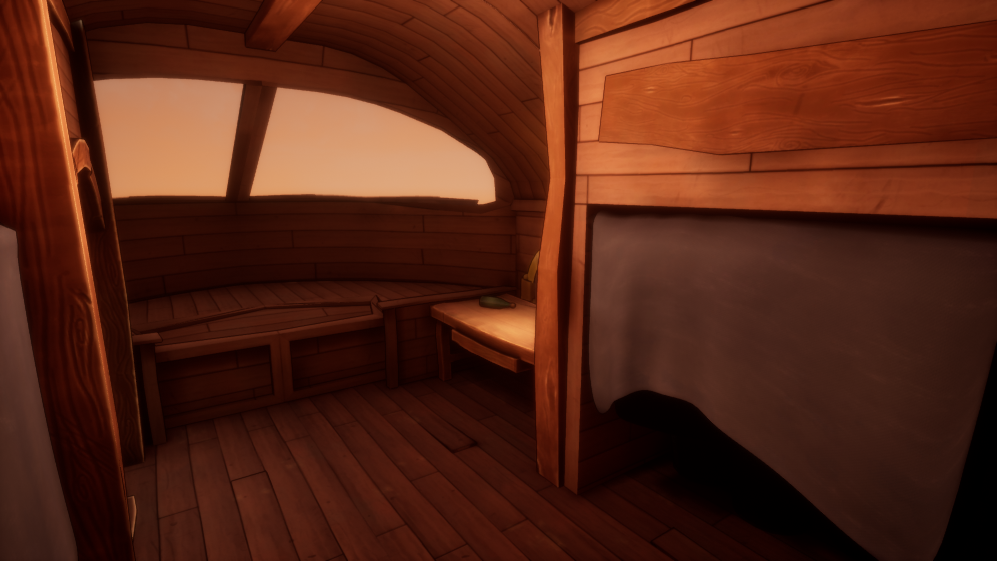 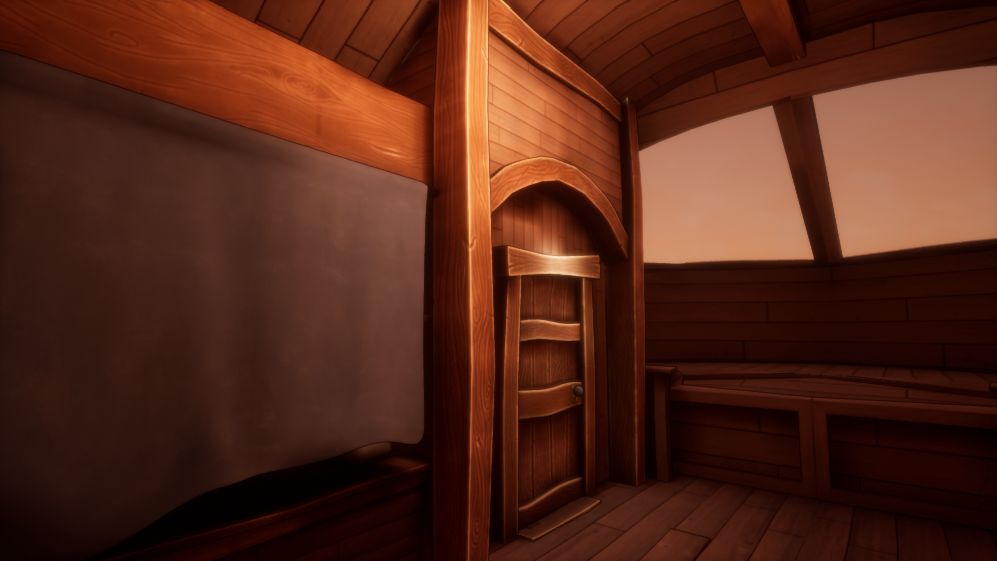 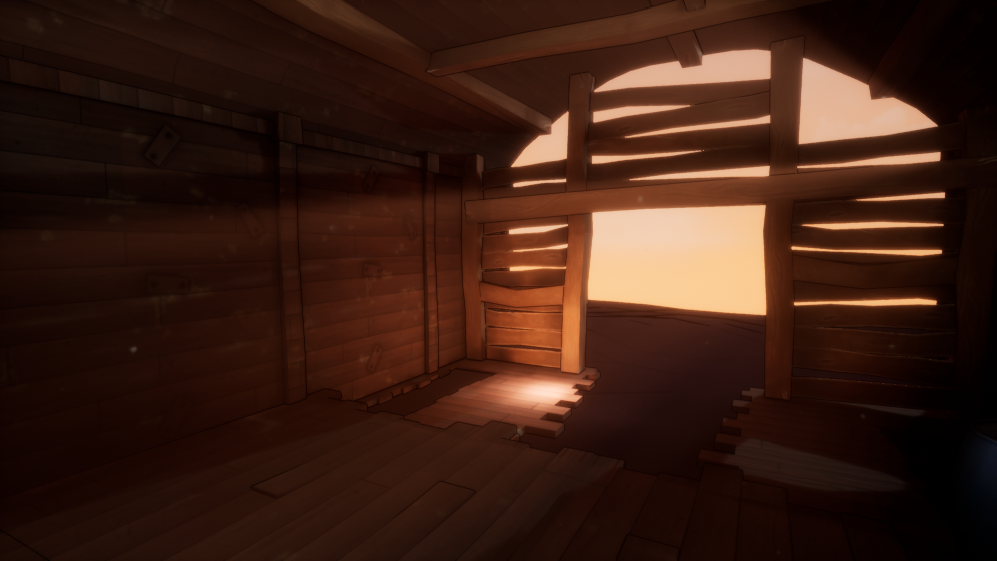 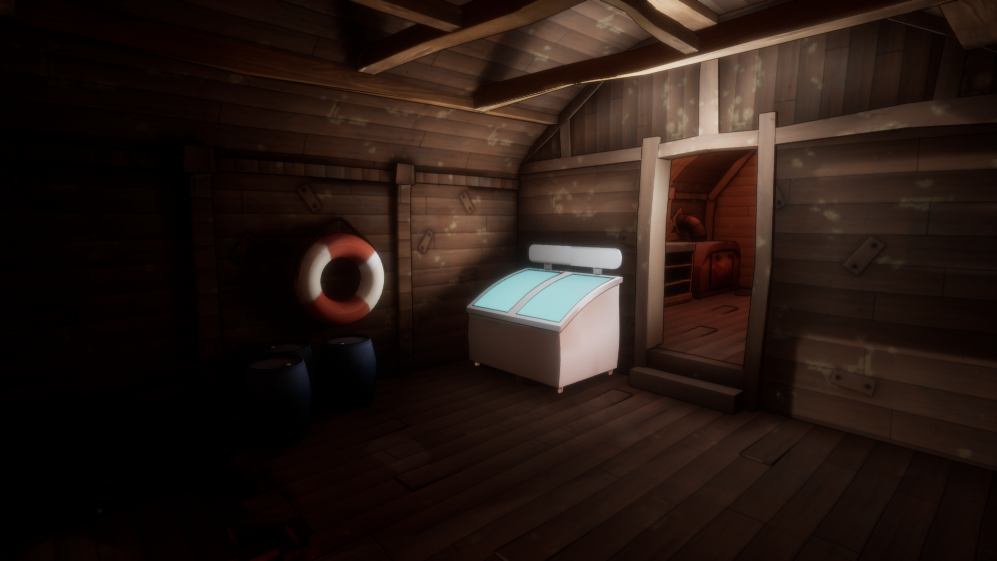 And to give a better idea of what the final results will be, a few pictures of my final blockout: 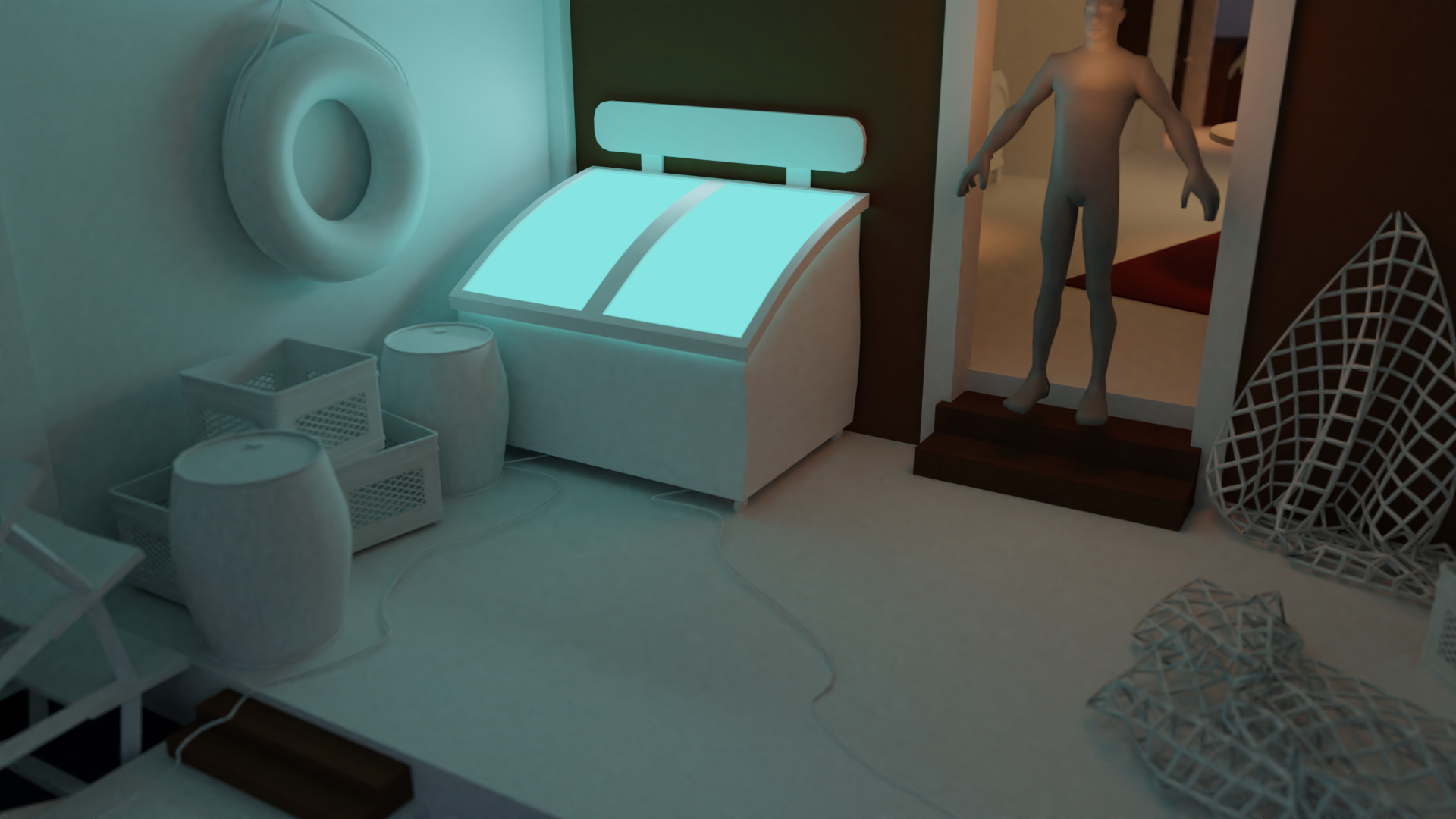 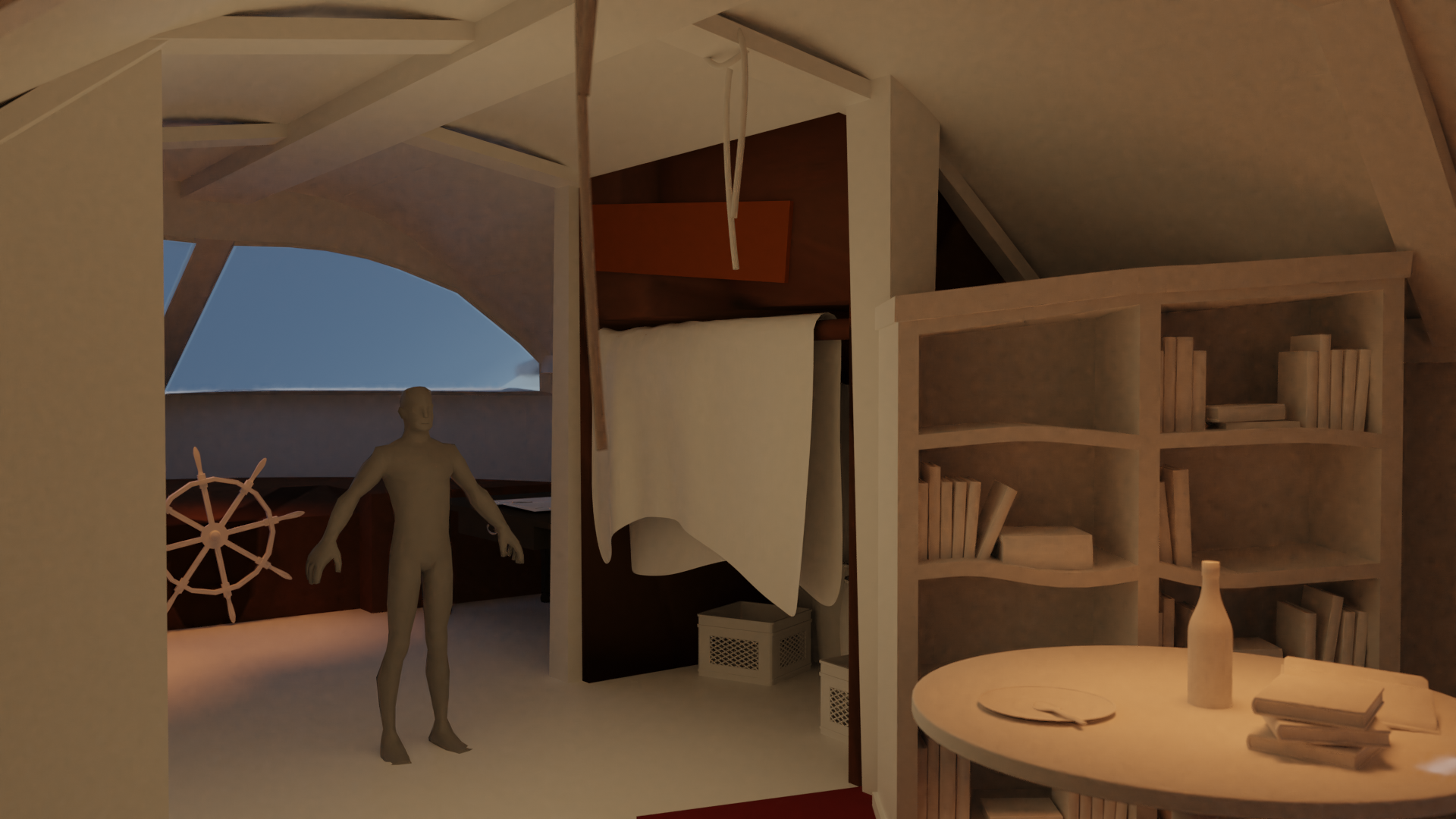 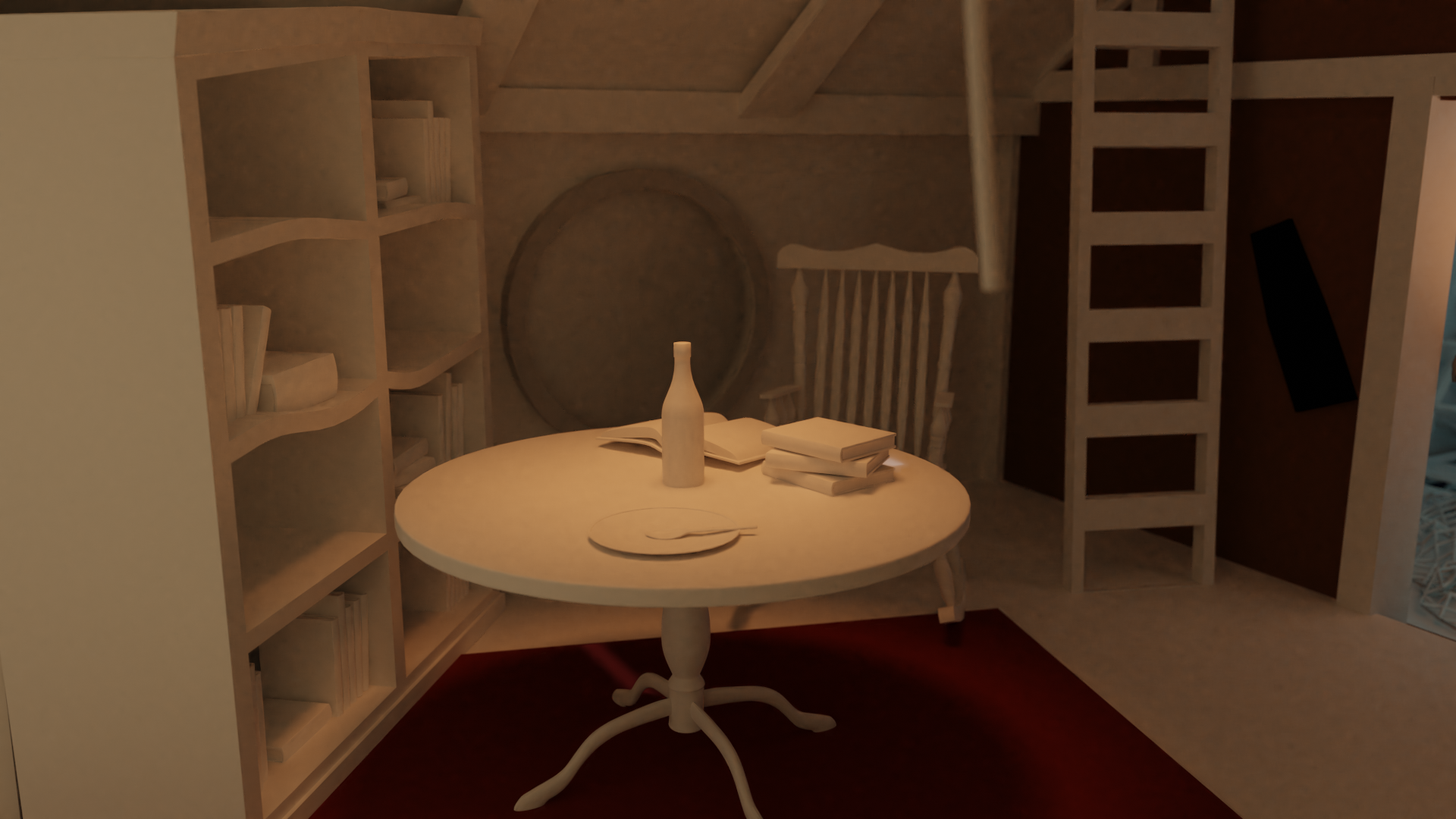 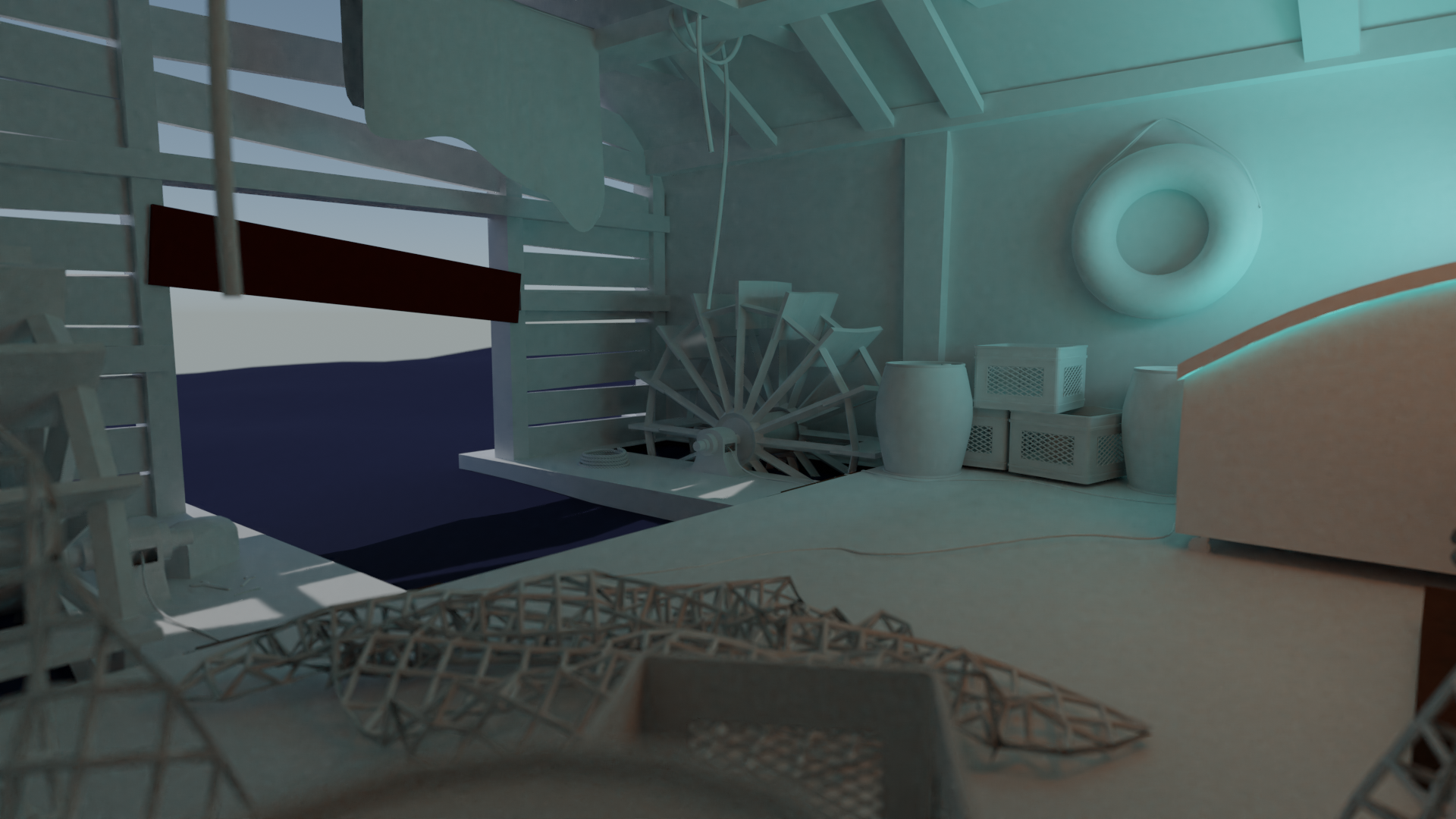 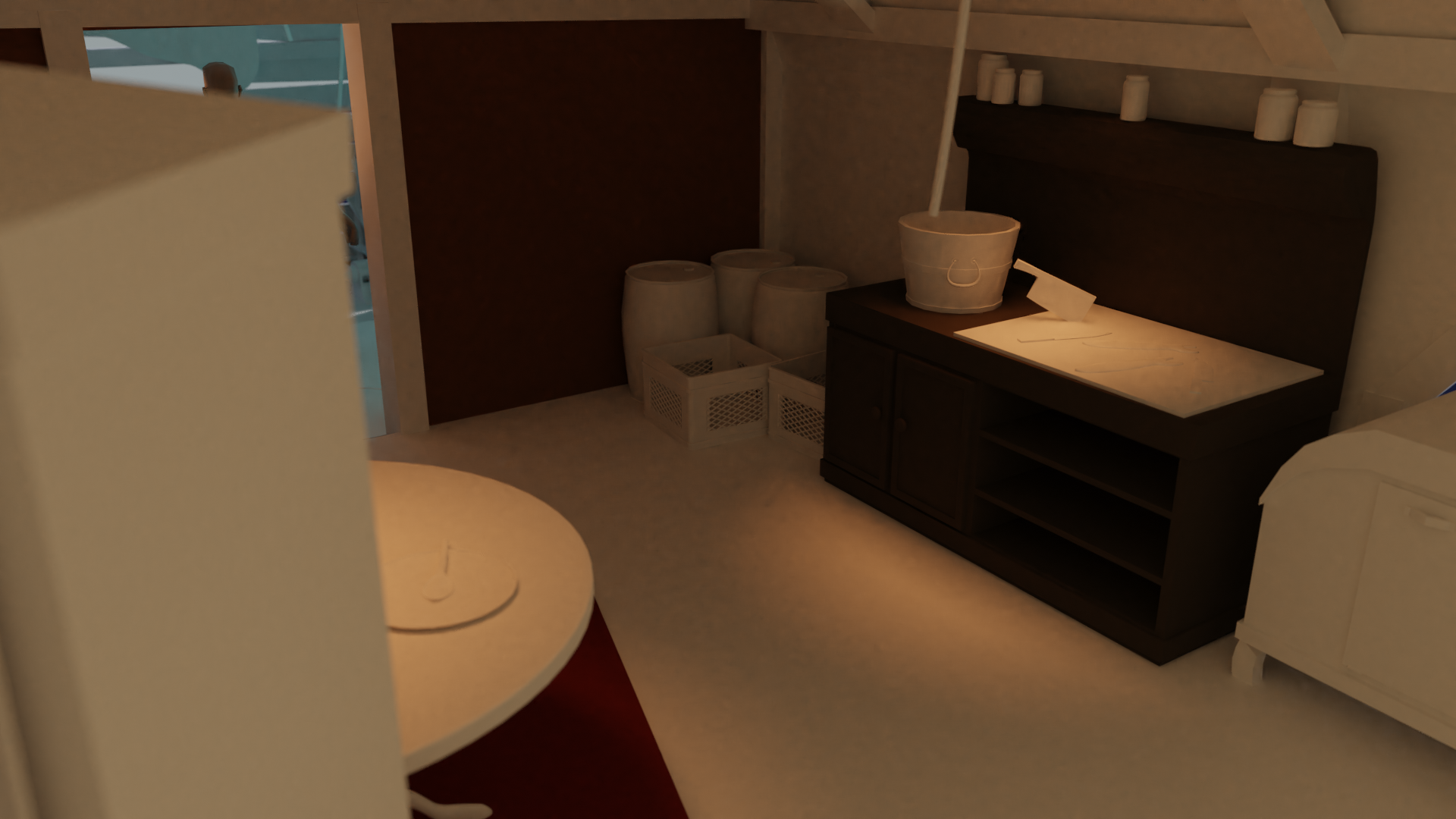 As I'm a mechanical engineer (yet aspiring environment/prop artist), I figured it would be fun to design several DIY stuff the main protagonist had to do to make his ship more comfy:
- Wave generated electricity
- Solar heated furnace (this one might be hard to catch in the renders)
- Mini-fishing dock at the rear
- rope system to manage the sails without having to go outside (to be done)
- Several handcrafted furnitures
I gathered a load of references on boats, stylized arts and DIY projects, blocked out everything inside blender directly and very quickly exported everything into UE4 to start lighting and walking around the level (to see if everything was actually walkable).
My main concern at this step was to fix the basic shapes as I wanted to go for a stylized look.
Following the advices given in this great NoMoreGrid tutorial, I wanted the shapes alone to guide the player's view on what's important (cables converging to the fridge, beams slightly inclined to point the scale that goes at the second floor, Library with a slope guiding to the boat wheel).
To increase the stylized look, I also setup a black outline post procee right at the blockout process (following this UE4 training video).
I decided to add a focus point on each part of the boat to guide the story telling:
- Planks closing the rear of the boat to prevent him from looking behind
- Wheels generating electricity at the rear
- Fridge powered by the wheels to indicate the time-zone the story takes place in and create a contrast with all the other hand-made stuff (also, having a fridge on a boat is kinda absurd given the power it consumes but that's the funny "shut up its magic" fact)
- book, on the table (a potential save point for a game): a diary to balance the protagonist lonelyness. This one was not planed at the begining but I took part in the CGBoost Magic Book challenge and worked 2 days straight on a detailed book asset and figured afterwards it would fit well in this environment.
- Scale leading to the second floor: a way to escape the enclosure of the boat, to see the horizon
- A secret door at the front of the boat that leads to a mysterious place (no. it's not the toilet.)
Planing those focus point at the very begining really drove the way I chose every shapes and lighting and also determined which assets would be hero props requiring to spend time on.

Once I felt satisfied with the blockout I divided everything in four different blender files:
- Structural assets: walls, floors, every modular assets that would make the boat structure
- Small props (nets, buckets, barrels, compas, books...)
- Furnitures
- Hero props
I started with the structural parts and the bigger props to quickly add the big shapes of the environment and have a better idea of how it would look like in the end. Also at this stage I decided what kind of materials I wanted. I experimented a little on substance designer and came out with the following material that I used for the floors, walls, roofs and parts of the furnitures: 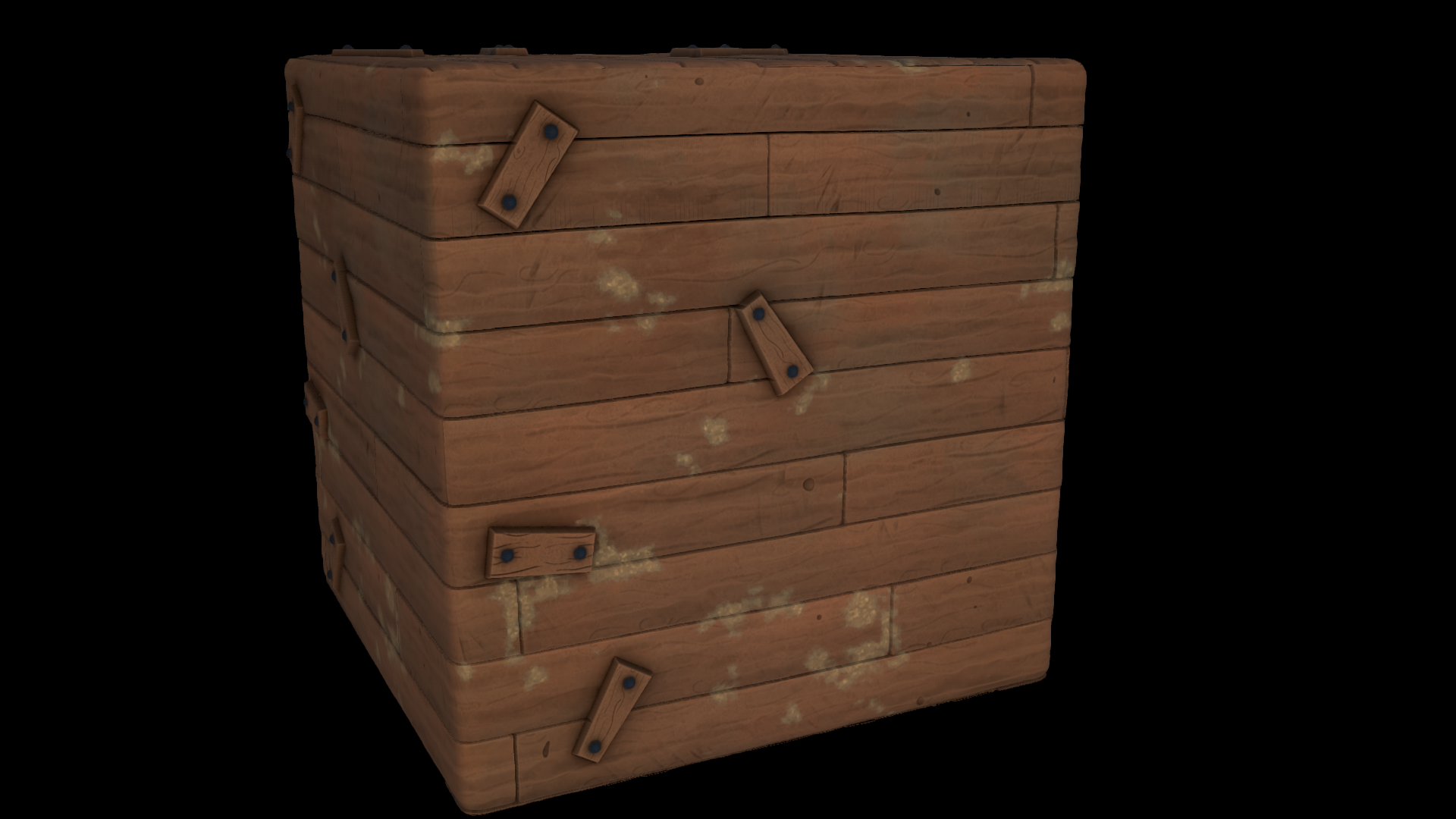 The amount of Lichen and nailed planks is a parameter that can be adjusted, as well as the wood saturation to represent variations due to humidity. All these parameters will be usefull for vertex painting and adding little variations in the level once I've finished all the assets. This made the process of the modular parts very quick. To add more interest without relying to heavily on tesselation height, I changed the mesh of the floor asset to emphasize the planks' twisted geometry:

Each asset was then modeled in blender, then quickly sculpted in Zbrush and textured in substance. For most "non-hero" props, I made a few smart materials at the begining that I reused heavily to keep constistency over the process. For texturing, one of my main concern was to keep a constant texel density over the whole level, as I opted for a first person environment (silly me). I followed the guideline detailed in this guide by Leonardo Iezzi and relied heavily on the great Texel Density Cheker add-on for blender by Ivan Vostrikov.

I did the asset one by one and positioned it right away in the environment as I found it more motivating to see the environment building itself step by step. Sometimes, it meant pausing the modeling process for a few hours to add a particle effects, post processing or move light a bit but it really kept me going, even knowing that it wouldn't be the final lighting setup.

This project already taught me a lot of things on the environment making process and I had lot of fun thinking about the story behind it.
My next steps will be to finish the small props and hero props, Vertex paint the wood texture to add more variations and work a bit more on shading/VFX effects in UE4 (the sea, particularily, has yet received 0 min of my attention, but I've seen lots of stylized ocean shading tutorials realeased recently and can't wait to experiment with that), and make the whole structure follow the wave movement (no idea how to do that yet).

My sole regret up to now is that I haven't used any trim sheet: given the large number of wood objects in the environement, sculpting a few high quality wood planks at the begining would have definitely been a time-saver, but I think I had too many things to figure out for a first environment to jump right into that.
I'll keep updating my progress,
Tell me what you think