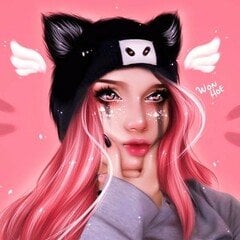 Here I'm talking about a university project in which I had to concept a 'future tribe' character, from silhouette designs, through development stages and towards a final front and back design.
This was my first Digital 2D project during my first year at uni.

The idea was to create a storyline for a future apocalypse, and to design and render a realistic tribe character accordingly, to display things such as possible job role, environment, threats and cause of apocalypse.
In theory this final concept would then be given to a 3D artist to model. 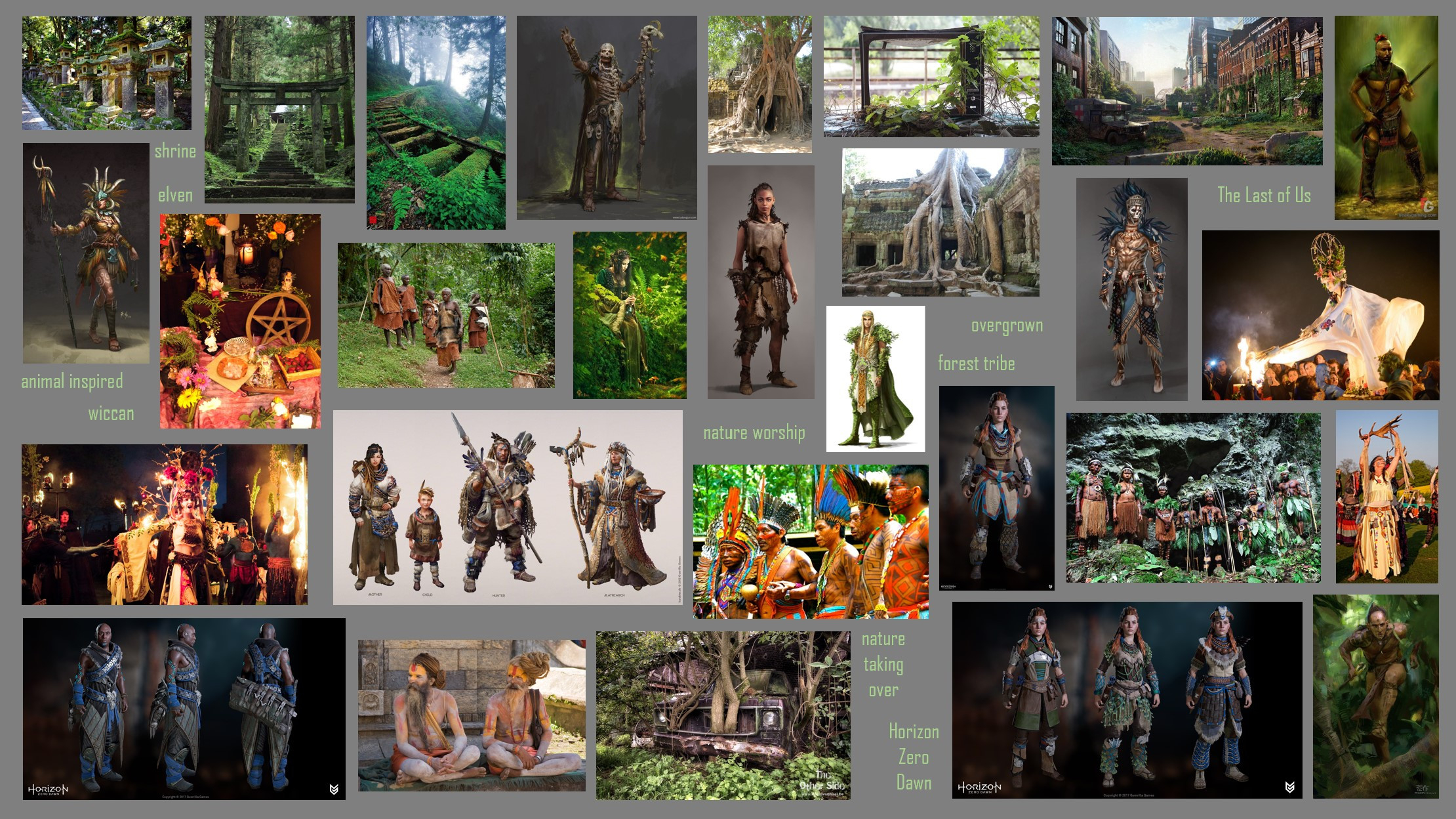 My idea was that this apocalypse was caused by a downfall in technology. All electronics, communications, internet and machines quit functioning, causing a collapse in society and eventually leading to nature taking over and claiming back the Earth whilst civilisations panic and fight. Hundreds of years later, surviving communities have reverted back to primal instinct, living of the land and pull through as tribes. 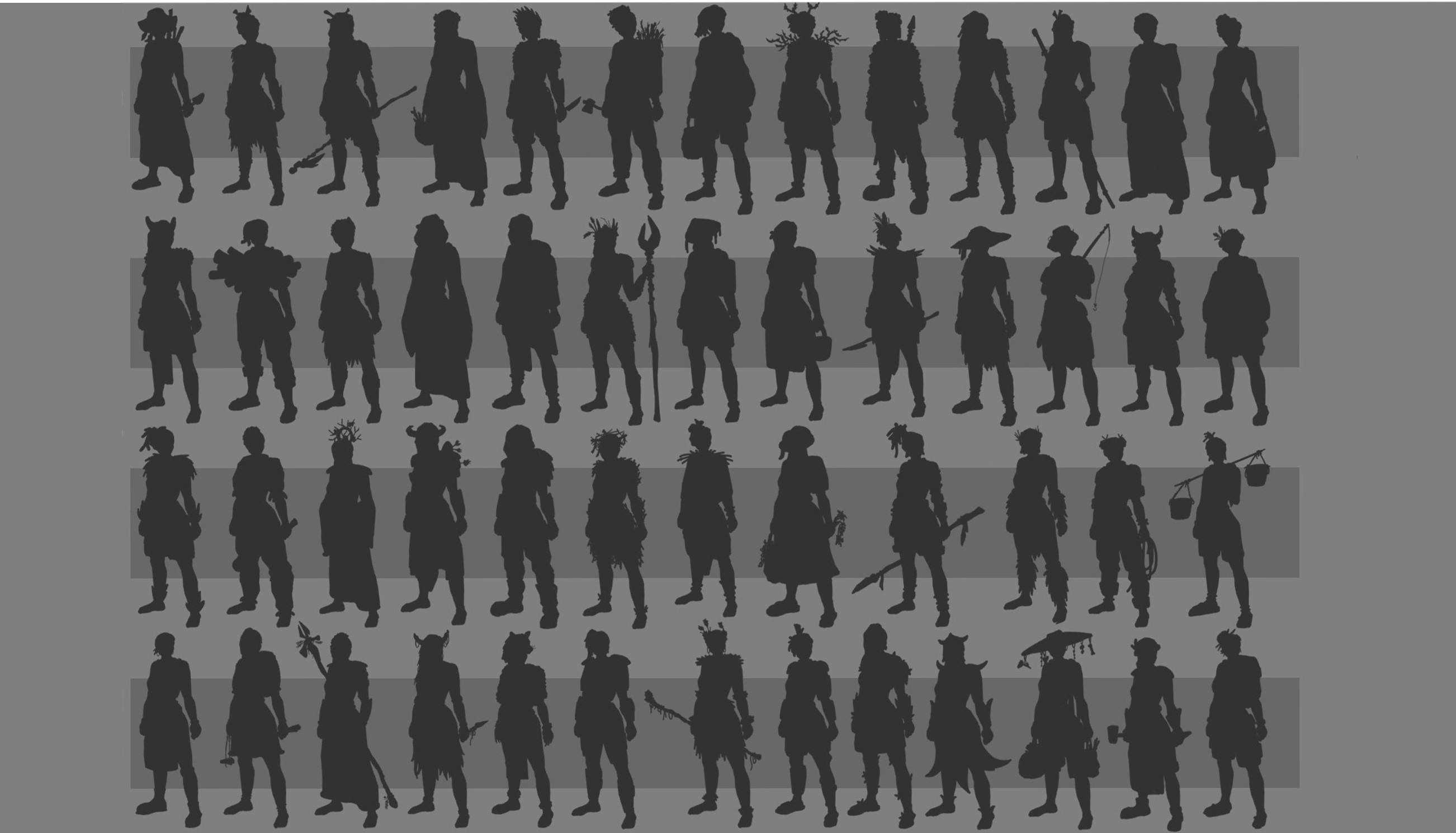 I began with silhouette designs (as this was the required first step as part of the project brief) and taking inspiration from the above reference images, I knew I wanted this character to be female and relatively slim/fit, as it only makes sense if they are required to travel and take part in manual labour to survival a world without machines. I tried to focus on particular job roles that could be identified as living off/with the land, such as fishermen, hunters and foragers, as well as some warrior type figures. Maybe they rule the tribe? Decorating themselves with elements of nature such as bones and flowers could signify a position of power? 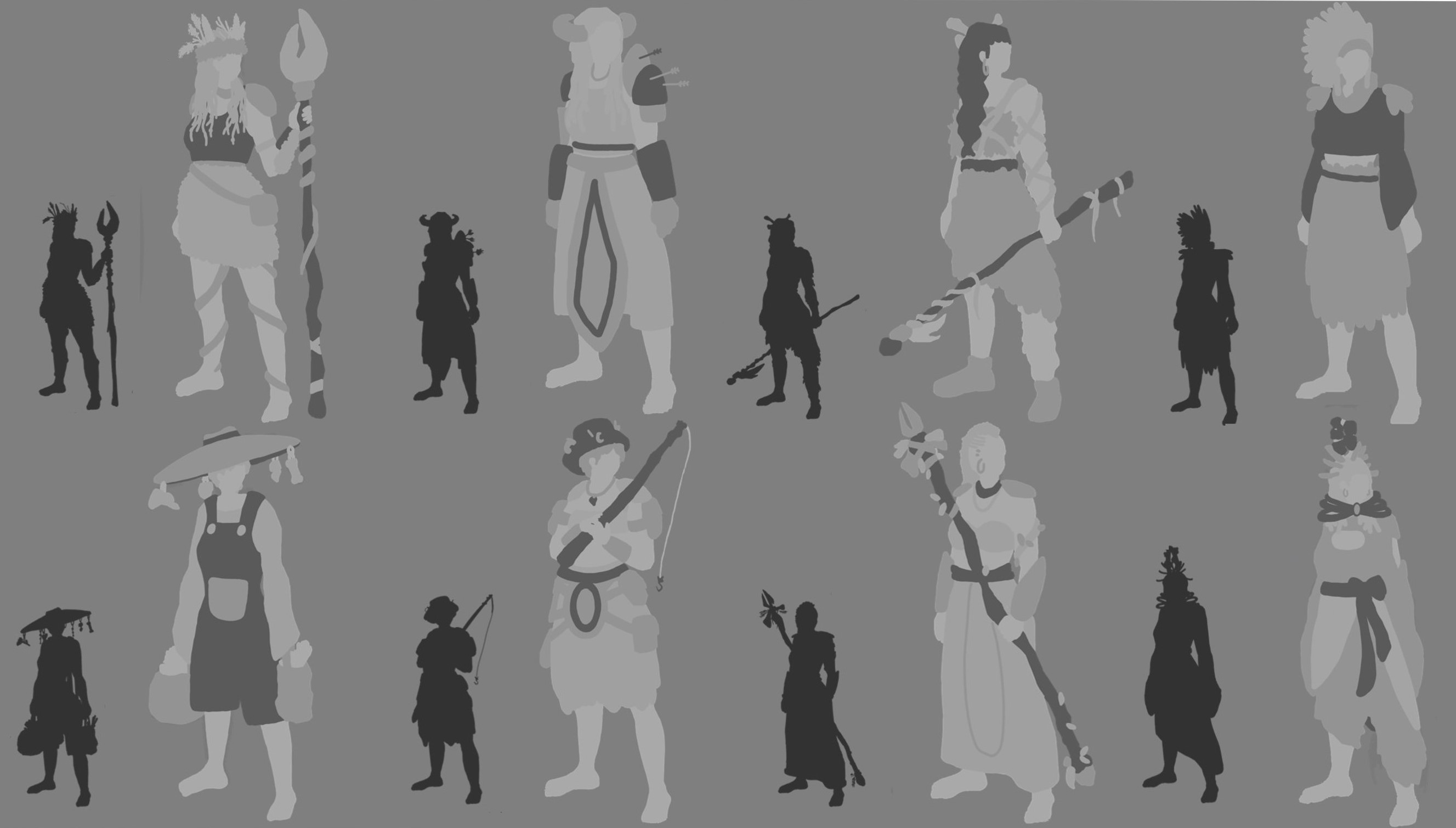 I chose 8 of these silhouettes to develop further with simple blocked out tone. The designs I chose included a leader, warrior, hunter, fisherman, forager and a priest. I thought these were the most easily identifiable silhouettes, and adding tone to these definitely made these roles more recognisable. I referred to my mood board as much has possible, making sure to dress these characters with elements that would be plausible and realistic in a natural overgrown world, such as vines and foliage for decoration, and natural materials for weapons and tools. 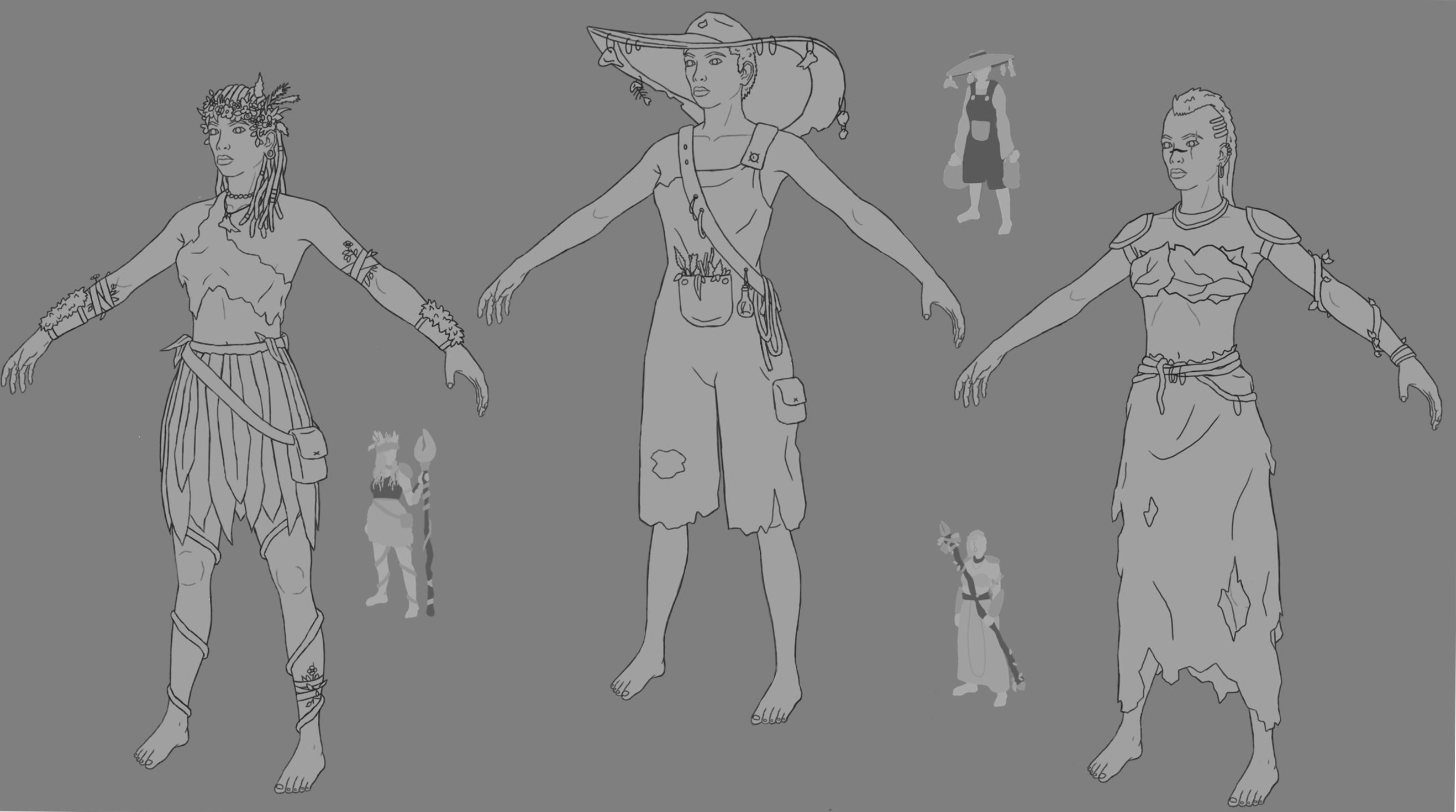 I then slimmed down this collection again by selecting the 3 designs I found most interesting, and developed them with line and further details. I grew quiet fond of the idea of this tribe using nature to embellish their outfits. Maybe this is part of a new found religion, medical practice or craft?
I went back to my research and pondered some ideas, and thought what if this tribe is quite peaceful? Perhaps they're an apocalyptic hippie or flower child? Adorning themselves with nature and living off the land peacefully, staying active and keeping to a vegetarian diet?
There are elements of all 3 designs that I feel are successful, and so I decided to merge them together to create a final design. 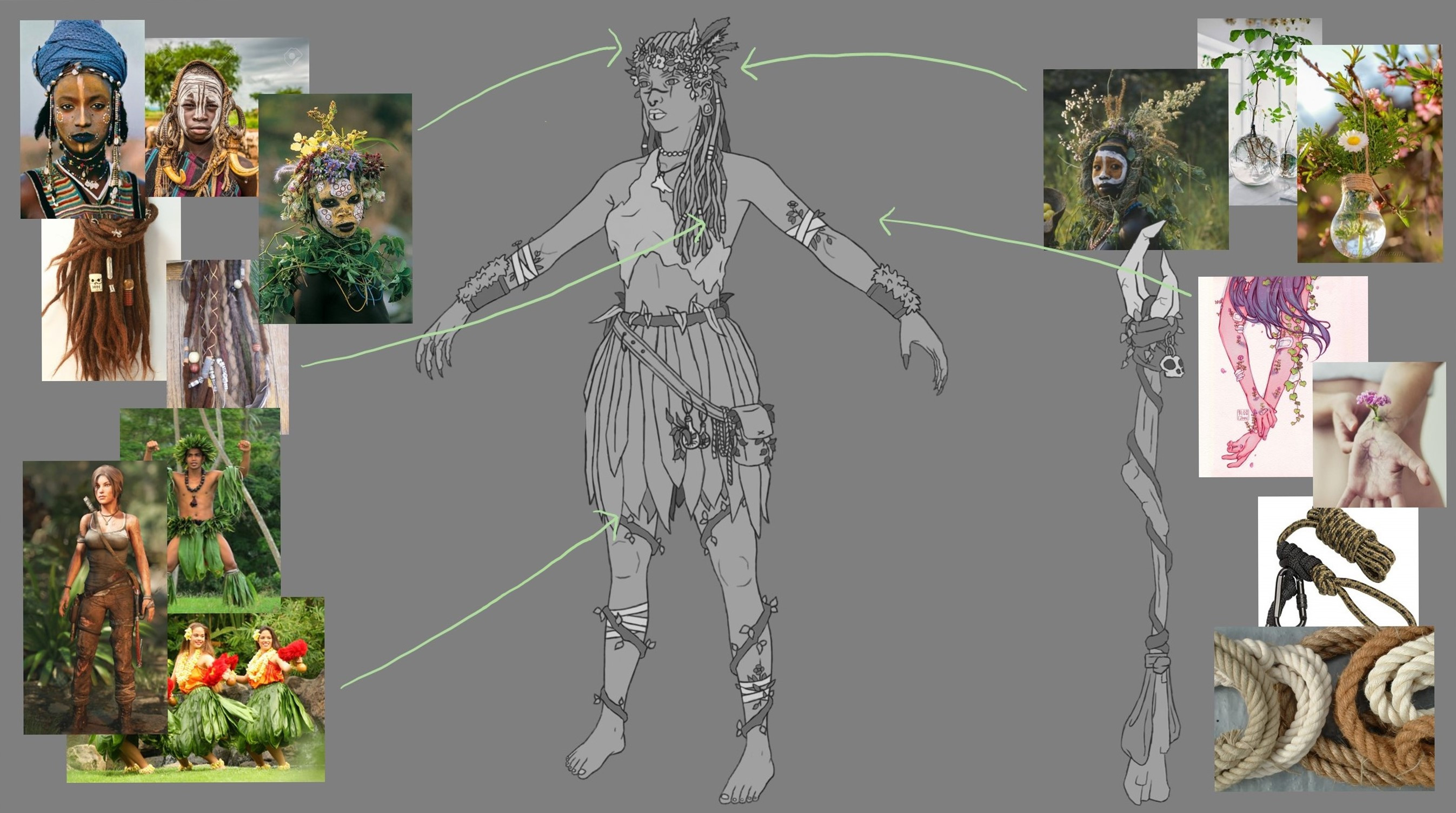 I gathered some more specific reference images to work from and pieced together a final design, focusing my attention on the far left design of the previous 3, as this appealed to me most as the design that represents this new age hippie tribe best. I added some face paint, items to the satchel, lengthened the dreadlocks to show the characters embracement of natural growth and developed the staff to accompany them.
Whilst researching I also came across images of flowers growing from beneath bandages and out of the skin, which I thought could possibly add to the story. Have these tribes lived off and within nature so much that they have evolved to incorporate nature into their DNA or immune system? I had originally added the plants behind the bandaged wounds as a medical practice, as this tribe had resorted back to old age herbal remedies, however this new idea definitely interested me more, and this could also explain/add to the addition of the vines around the legs. They may have evolved to a point that vines are developed along with strength, and they are there as a sort of armour. 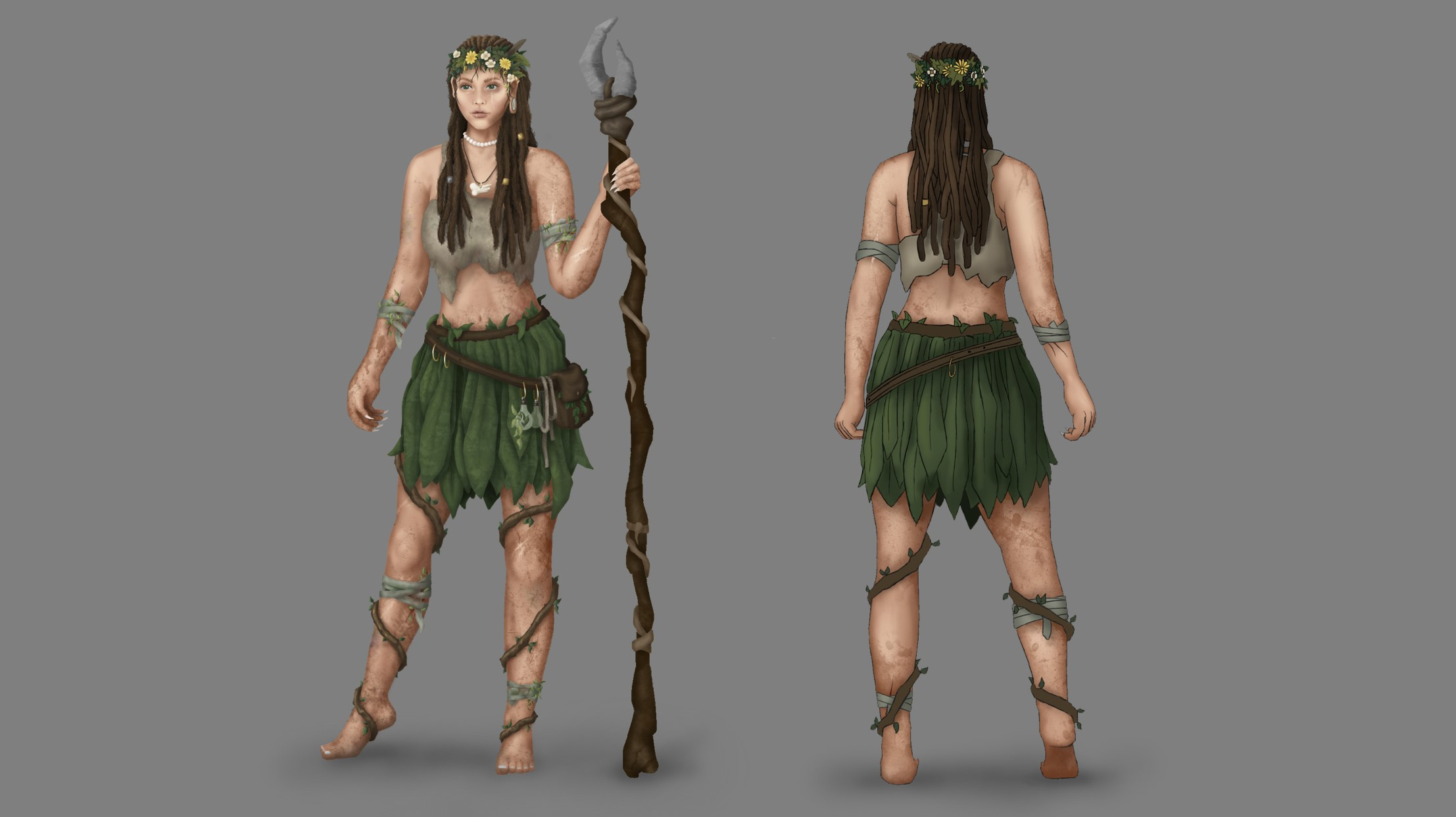 The final coloured concept took me a while to complete, as this was my first time painting a realistic character and so I had to learn a few techniques and workflows along the way. The back view of the character is was less detailed, as I believe this is the usual practice in the game industry, as all the texture and fine detail are displayed in the front view.

I'm really pleased with how the final render turned out, especially for my first project, however there are some aspects that I know could be improved, and things I wish I'd thought of earlier in development.
For example, I feel that the character could have been more muscly, as the constant labour, active lifestyle and exercise of living in this new world would have most likely resulted in muscle development.
I also think that the smaller elements, such as the items on the satchel and the flower crown should be enlarged, as they are being lost in the detail of the final render. I also think adding more items around a belt or bag would have added to represent the forager job role.

I apologise for the amount of writing, I'm not too experienced worth blog posting and I'm still figuring out the best way to explain my thoughts, processed and ideas, but I appreciate if you've read through all of this and I'd be more than happy to hear any feedback, critique of general thoughts!