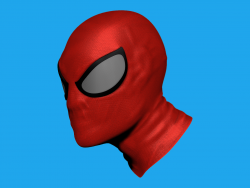 Is it better to bring a whole environment into a program like Substance Painter to texture, or how would you break down your scene to do it? ( I own a current copy of SP and a recent study has me looking for an answer.)

Asking because I am trying out the Blender to SP plugin I just bought, expecting one piece, and it brought everything, including the cutter objects I used, so there this stuff that won't be there at the end

obviously, I can do it without the plugin, or just plan it better. In the end, I would love to save time on all the importing/exporting end (which is why I got the plugin in the first place). But doing it in one go, I'm not sure what the ramifications could be if I tried to do it all at once, like baking issues and things like that.

So far the issues I've seen off the bat is that all the Material IDs are relabeled (cube/plane/etc) so finding anything in here is going to take some time.

Second, I figure baking maps would be affected in the darker areas where there's no light. It seems pretty good all things considered, but maybe I'm being fooled.

Anyway, thoughts/best practices are encouraged. I posted an image of the scene post-baking normal and AO maps.