kateblacks
polycounter lvl 2
Offline / Send Message
Pinned
kateblacks polycounter lvl 2
Jul 2020
Hiya everyone! I wanted to go ahead and start journaling my progress with art more, so I could see where I grow and where I need to grow more. Critique is always welcome, but the main purpose of this is more for documentation and reflection. I'm also new here and would love to meet more people through this

. I love working in handpainting and stylized 3D. Thanks for checking my stuff out here. 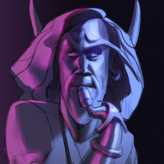