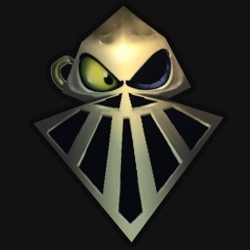 Also called "Battle-Mage Phoenix", she is both a Sorceress and a Warrior.

This new character was primarily imagined as a new skin for Mevenn, but ended up being a completely new character. I've used Akeytsu and Mevenn rig as a blocking base for concepts alongside PS for conceptarts, ZBrush for sculpt using mostly a SubD process so really intensively the ZModeler (it was a nice discovery btw ! I think more about ZBrush like a complete modeling tool now).

The rig was also a real pleasure to explore (thanks to Akeytsu), and has also forced me to experiment more on clothing & face controls. I may create more anims with this character in the upcoming months (it's just so coooool to manipulate in Akeytsu ♥)

You can read more infos about the character here : https://www.artstation.com/artwork/YawoGK