Elddim
Offline / Send Message
Elddim
Nov 2019
Hi. In 2011, I drew a comic book. But I did not know how to finish the story that I was telling. Many years later, I came up with the end of the story. But now I want to draw this story not in a comic strip, but in an animated film.
For more than a year I wrote the script and searched for the style of visual performance. I understood that one person will not be able to make a full-fledged film, which large studios do. Therefore, I refused three things. It will be hard for me to implement these things: no dialogs (voice), no music, no color (it’s hard for me to work with color - the film is black and white). These restrictions fit into the style and genre of the animated film.

In addition to the “three things,” I use some techniques that simplify and speed up my work. I refused the animation, as in old Disney cartoons. An example of animation for me was Japanese 2D animation of the late 80s, early 90s (good Japanese animation))). I will tell you more about them later.
I really like 2D animation.
You can watch line-animation and tests here: https://youtu.be/Pbo_y8DaZWU
Comic book read here (rus): https://selfmanga.ru/made_for_life/vol1/1

It's not final shots. Now I work a lot on the backgrounds and effects of some scenes.

Here I will show and talk about progress. 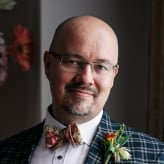