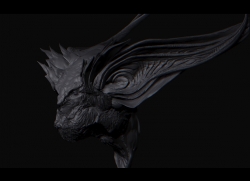 irb
Offline / Send Message
irb
Mar 2016
Hi everyone. It's been a while, my character is in the process of development. And now I am happy to share the process.
"He is being born by the World itself, like a flower, a reflection on the ice surface of the crescent." Koteyza.
The creature has no weapon (there are too many wars in the world, it`s a kind of annoying already). Koteyza’s torso is covered with something like metal scales, which are made of some substances of his body and can get any shape, according to his wish. This cover can be changed like a chameleon`s one, hiding the creature. Koteyza`s eyesight is bad, maybe he can not see at all, but the well-developed hearing helps him to navigate, using echolocation, like a bat. "Multilayer" ears can catch different frequency ranges.
He has a wide-dimensional consciousness, divided between his "Cubes" - biomechanical components, which he grows in his scales like a cocoon. A swarm of them fly around, and everyone cries, sending signals. So it broadens the vision of space, making it of several segments of perseption.
Here is my list of the image. I have made several concepts, trying to find some unique texture. So, I have built some anatomical basis of the skeleton and muscles, each group was created separately.

Now I am working on details and textures. I use Cinema 4D Mograph system for cloning elements in topology. Instead of decorating him like a Christmas tree, I decided to make a simple form with a complex texture.