[WIP] Historical - US Invasion of Sicily 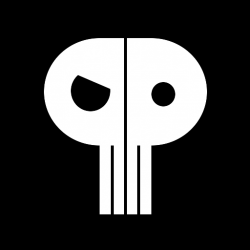 f_x
Offline / Send Message
f_x
Jan 2016
By way of reading some of the threads here I was looking at the tanks-encyclopedia site where I found an image of an M5A1 Stuart which featured the US white star insignia surrounded by a yellow circle instead of the usual white: 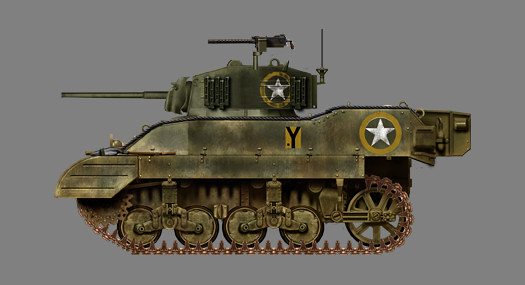 That struck my curiosity and led me into a rabbit hole of research, during which I found additional evidence of other US vehicles (Shermans, Halftracks, Scout cars, Priests, Tank Destroyers) with this odd yellow circle.  They were not always easy to find!  There's even a B&W photo of Patton in his command car where you can clearly see the different shade between the star and the surrounding circle. 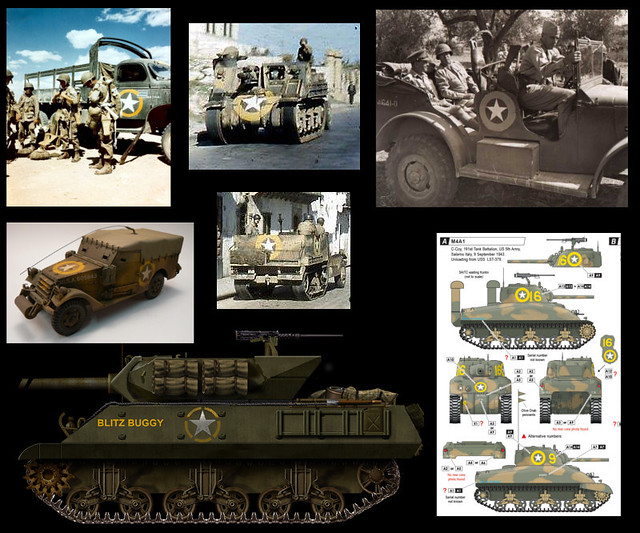 Apparently the yellow circle originated in the North African campaign, but a specific order was given in 1943 stating that all vehicles slated for participation in the invasion of Sicily were to increase the width of the circle and paint it in yellow.  Having already spent way too much time tracking down this historical trivia, it seems fitting to use this for my entry.  Using the M5 Stuart reference as a general guide for the paint scheme, I will make a US skin based on the 1943 invasion of Sicily.

Here is a first pass trying to get the basic colors and patterns to be in the ballpark.  I'm looking at this on a map with neutral, diffuse lighting, and another map with warmer direct sunlight.  I still need to balance the colors a bit before I start propagating this to the rest of the vehicles. 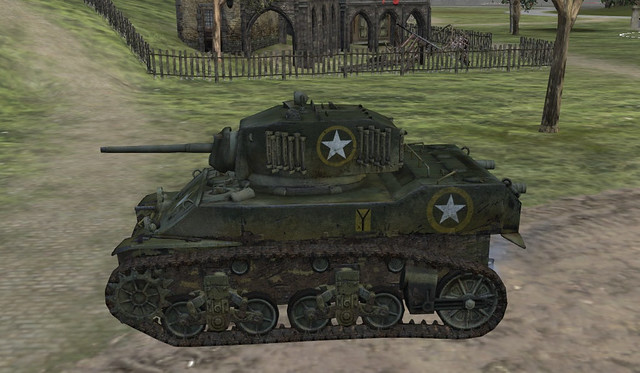 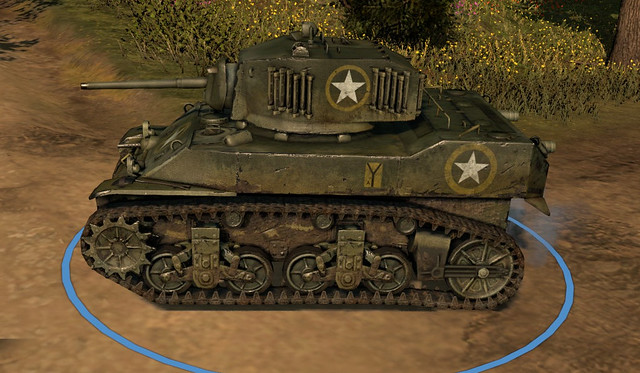 This does not yet have any white lettering for serial numbers, divisions, etc, but I aim to get to those details too.

Please note that this skin is in the category “inspired by the historical events”.  I place emphasis on INSPIRED BY.  When making creative choices I won’t be as much of a stickler for historical accuracy as others.  That said, the amount of reference I've found should allow me to make something that will look both good and plausible.

There's another idea I've wanted to try for a while, and now that the magic voodoo for baking normals/spec/gloss has been discovered (thanks Shriken!) I'd like to incorporate into some of my vehicles the concept of camo netting.  What I've researched is that the US Army issued nets without any dressing on them, and it was up to the soldiers on the field to find materials to make them into effective camouflage for their location.  The Germans favored using leafy branches, but the Americans often used rope which in the reference photography is easily recognizable as the squiggly lines on the nets.  Camo nets were mostly used to hide static emplacements and parked vehicles, both for the purpose of ambushing the enemy as well as to avoid detection by air. 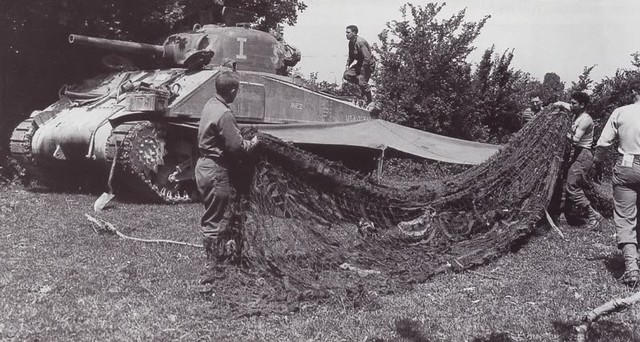 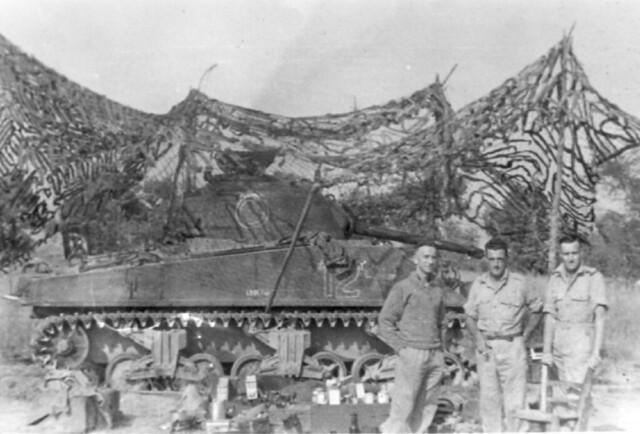 Not being able to add new geometry, I can't really make draping sheets or add tree branches, but I think the rope lines on a net that's flush on the surface could still look pretty decent.  Below are a couple of proof-of-concept tests I did get an idea of what it will look like: 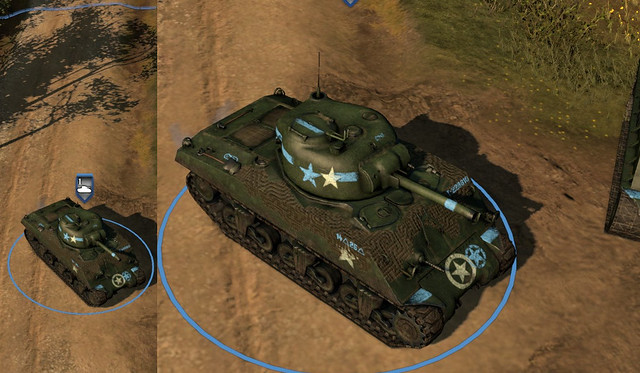 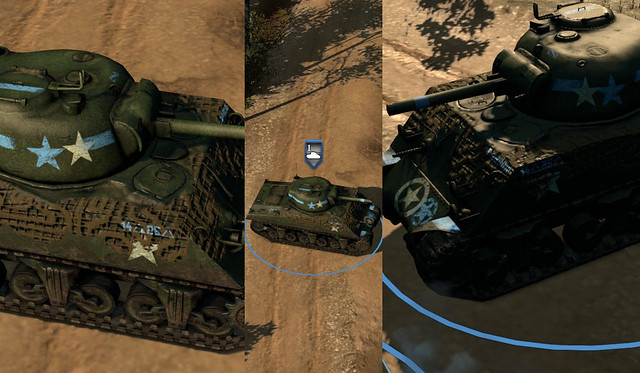 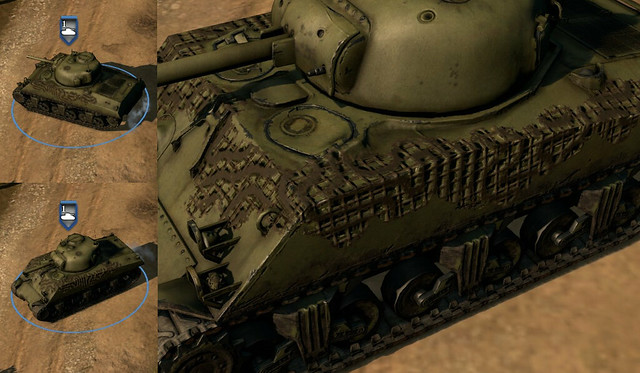 I'm still not sure if the net and rope will be brighter than the base vehicle, or darker.  I'm leaning towards darker.  The scale will be cheated.  My first tests had the net at a smaller scale which might be more appropriate but at the default zoom level in the game it will just turn into noisy mush.  So I'll probably end up with a grid size that's a bit larger for the sake of it looking decent in context.  The net and rope in these tests is too regular and dense but again it was just a proof.

I'm not going to apply this camo net concept to all the vehicles.  I tested with a Sherman because I had a file set up for it, but I think I'll try to restrict this to more emplaced/ranged vehicles like the Priest, Calliope, mortar halftrack, etc.  To me it makes sense that they might have thrown a camo net on those to help hide them while they are firing from a fixed location for a while.

The camo nets will definitely be a challenge but I hope it will add something unique to this skin pack.  The effect looks pretty cool as the vehicles and/or the camera moves and the light plays across them.