Autodesk announced 3dsmax 2012, we thought it would be a good idea to take a look at what's new.

There seem to be a lot of new features here is a look at the ones we think will impact you the most.

Out of the box the single biggest change to our every day work flow, is to the UVWunwrap. Hands down this is going to effect your every day life in a big way, hopefully for the better. 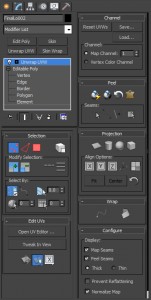 The reskin takes a little getting used to, but all your old friends are there and they brought some new friends. If you've been using TexTools then you probably have used something similar to a few of the new features.

Quick Peel, does the best it can at auto peeling your object. For the most part it does a good job on simple objects on complex stuff jump to peel.

Peel, (or max's version of LSCM) while this is on this solves as you break off pieces and define edges. It's a bit like always having relax turned on.

Unfold Strip from Loop, this works a bit like spline but runs on an edge instead of requiring a spline. Pretty helpful for when you forget to auto generate your mapping coordinates for a spline. 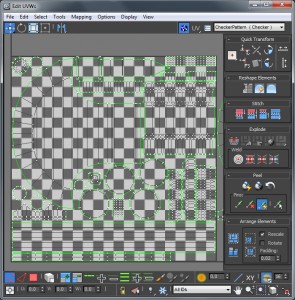 The scale tool defaults to a "select and squash" style mode which is different than what you're used to. (drag vertical it scales V, drag horizontal it scales U, drag diagonally and it will scale both). To get it to scale like previous versions (scale U&V the same proportions regardless of which direction you drag) hold Ctrl. If you hold Shift it will constrain the scale to the direction you’re moving the mouse.

Linear Align: Straightens rows or columns of verts or edges.

Align to edge: Rotates the selected edge to absolute horizontal or vertical, whichever is closest, then selects all remaining edges in the cluster and rotates them the same amount.

Straighten selection: This will attempt to square off UV shells. I love this, I've been waiting a long time for something this quick. In the past we've had to make due with flatten horiz and vertical which adds up to a few too many commands to do what this does in one button. Before we had to, click a vertical edge, click loop, click ring (clean up any selection that was undesirable) click flatten vertical (half way there), click a horiz edge, click loop, click ring, click flatten horiz. Now you just hit a button and bang the whole thing is straight. I find myself using this a lot and on the odd occasion it fails I fall back on straightening a few loops.

EXPLODE: This does an auto unwrap based on face angle, smoothing group, or material ID.

Rescale elements: Around here, we have been calling this Normalize which was updated and included in TexTools. This new default version works when you have Unwrap applied to more than one object which is great.

The advanced options panel that hung off the bottom of the window is gone and all the buttons have been given a reskin and a new position. The mode select buttons (vert, edge face) are down in the lower right instead of in the lower center. I personally use shortcuts to switch between these modes but for people who are icon dependent its probably going to be a bit jarring the first few times. 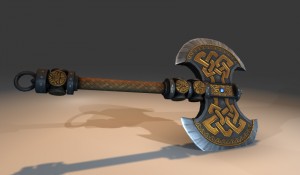 This is a great little high quality viewport render. Most of us have been using 3point Studios Viewport Shader or Xoliulshader and now Autodesk has stepped up to the plate and delivered one of their own, by completely overhauling the viewport system. 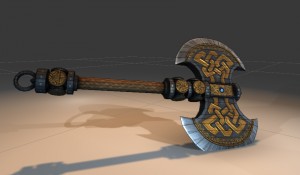 To start it up: Right click the viewport label and choose "realistic". From the same menu you can choose configure and set it to use scene lights, add shadows and AO. Unlike past hardware viewport methods Autodesk, this one seems to feature both quality and speed. As an animator who likes to do it with the lights on, I really appreciate a good viewport shader, especially one that is synced so tightly to the final render output.

There are probably some more stunning examples floating around the web this is just what I had laying around, so go hunting check out the link at the bottom that takes you to some sample videos.

This was added to 2011 so its not exactly all that new to a lot of people, but they added a feature to the clone brush that lets you clone from any window including windows in other apps as well as the viewport, fixing seams just got a little easier? Or you can use it a bit like a stamp brush? However there are still some things I really want that haven't been included. Things like an eye dropper to select colors something I use religiously while painting. Viewport Canvas still likes to fubar psd layer groups and adjustment layers so... the addition of the clone brush while its nice, doesn't exactly make up for the few remaining shortcomings still in viewport canvas. With that said if you're not using viewport canvas, you should check it out. I love it and have been using it for 70% of my material creation. 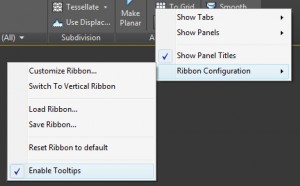 GMT Tooltips are now minimized and can be toggled off, Right Click > Ribbon Configuration > Uncheck Enable ToolTip (I think it was this way in 2011 also?) Pressing F1 while hovering over a button will open the help doc and take you to the section for that tool.

This pleases me greatly...

Conform brush: This is a brush version of the conform compound object. Typically in the past the conform compound object would smash all the verts of one object to the surface of the other meaning it only really worked on flat geometry. The advantage of it being brush based is that you can massage and push this a little better than the one click smash of the compound object, by selectively brushing arts of it. It seems to work best if you already deform the geometry to match (either through FFD or good old poly wrangling) roughly match before brushing it. Personally on the example I tried it on (applying 3D extruded text to the surface of a sphere) it did a decent job but the results where a little uneven. Maybe you'll use it to better effect or come up with some kind of unexpected use for it...

StepBuild: (was in previous versions but should be highlighted again) It can be found in the freeform tab with any sub-object mode selected for an editable poly object or edit poly modifier.

Clicking on the grid or the surface of an object places verts.

Shift click, creates polys between verts. It tries its best to create quads.  It is good at filling in holes, most of the time it gets the UVs right too, which is great when it works. When it doesn't you're no worse off than you would be using the slower methods (bridge, extrude, create).

Ctl click removes faces and leaves the verts, which is good if you're going to rebuild the faces using Shift click.

Alt click, removes verts/edges and leaves the polys, which is good for optimizing areas.

It has a few other features you can play around with, crack 2011 open, hit the help file and read up on those features if you're interested. 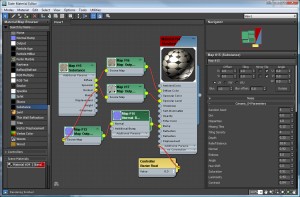 These are a new type of procedural material. Instead of noise, or checker you have things like "asphalt" and "tiles". These have parameters to define cracks, wear, noise missing tiles, scratches hue/sat ect...

The best way to interact with them is through Slate, It's a material much like a normal bump or a gradient ramp, you can plug the different nodes of a Substance material (diffuse, spec, bump) into different channels of a standard material. Ok that's cool so what else can you do with it? 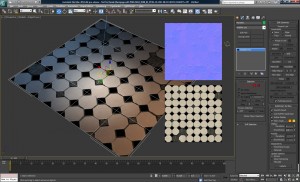 Using RTT and Projection, you can render these to textures, getting bump spec AO ect, pretty handy.

You can also use a blend material to combine them in any way you like and then render that out with RTT and you're off to a great start on whatever materials you're creating. They have a LOT of presets, cardboard, concrete, coal, corrugated metal, flowers & grass ect... They shouldn't be your final stop on the material train but they can really help get things rolling.

Ahh the new simplified curve editor, I like it. I like it even more because now all F-Curve editors in Autodesk products are more or less laid out the same and share the same terminology.

They've stripped out a lot of the buttons that a lot of people never touched, they can be called back if you right click a dead spot in the UI, choose Load Layout > Function Curve Layout (Classic) about the only thing I miss is the reduce keys button, which I can put back on my own.

The Isolate Curve button is a welcome addition to the UI instead of the XYZ buttons they previously had us using.

Break and unify tangents finally have buttons and some decent documentation, considering this was previously a nightmare to figure out how to use/operate I'm sure new people find this very helpful. There seems to be a general speed improvement too.

When they where introduced not many people liked them. They've made some improvements to help with the user rage. It no longer covers up your selection YEAH! If you are a button person you'll still be navigating from the viewport to the command panel and back to the viewport but now the annoying step of moving the caddy off to the side is gone. It's time to come to grips with Caddies, they aren't going anywhere, so head over to Customize > User Interface > Keyboard tab, set up your keyboard shortcuts in a way that makes sense for you, go get it over with you'll be faster because of it.

If you haven't already done so, head over to Autodesk's website and check out the videos and features of 3dsmax 2012. http://area.autodesk.com/3dsmax2012