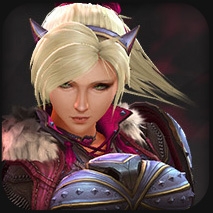 i wanted to make a custom item set for a dota 2-character (the one who rides on a tiger).

i came up with an idea for an armor design where the... mammaries had the shape of a cat nose :poly136: later i realized that the custom equipment was more restricted than i first though and decided to just do my own model instead.

i wanted to do a diffuse only character simply because it's FUN!

the model is about 6800 triangles and a 2048 texture for the moment. this will probably change since i tweak the model and edgeflow as i paint the texture.

here's an earlier version of the model:

i have revamped several things i didn't like; too plain, color scheme and proportions.

she was suppose to wield some weapon, like a whip or something similar but, later changed it so she have symmetrical claws instead.
0 · Share on FacebookShare on Twitter