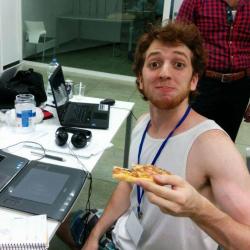 Justo
polycounter
Offline / Send Message
Justo polycounter
Feb 2015
On strange lands, a tower is found, consumed by trees. Its top floor holds a throne room, a grand but perhaps menacing place in other times. Was it abandoned? The colossal roots piercing metal walls, the vines consuming and claiming spots suggest otherwise. Whether this empire or kingdom moved on or was taken out by force, this building of theirs still holds some special kind of magnificence.

Hi! I’m a young beginner-medium experienced guy in modeling, texturing and drawing who’d like to learn some next-gen workflows for UE4. I’ve only had little experience with Unity4 before, so a lot of this will be new to me. I’m so excited to be competing against so many talented artists! Hopefully I’ll be able to make something to make them say That’s Cool.

For my entry, the description above sums it up…I’m going for something that could be found in a fantasy setting. I’d like to mix in metal with plants, pipes, cool architecture and even cooler textures. Big ambitions, little time left. Let’s work!! I have advanced a lot more in the modeling of the environment and some things have changed, but I’d rather show it in Unreal with some lights. I spent all day reading about lights, blueprints, lightmaps in UE and a bit more, so hopefully I’ll be able to show more tomorrow. I’m also watching Wes’ Substance Painter tuts, thank God there’s good and easy-to-follow documentation for this software.
0 · Share on FacebookShare on Twitter