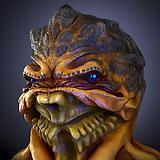 Bants
polycounter lvl 6
Offline / Send Message
Bants polycounter lvl 6
Jan 2015
This Prometheus inspired throne room was an idea which provided personal challenges to me, meanwhile I could explore new techniques that I've been wanting to practice. I went 'File > New Level' in UE4 and designed the level a week ago today. I wouldn't have been able to produce the quality in my materials within that time frame without the help of proceduralism. Hello Polycount, this will be my first Polycount contest I've entered. I've never made dark art in 3D before, but it's super cool and I hope to learn loads from it. My idea was a captain's chair as the throne, with his control deck as the room originally. I thought about setting the vista in space. The main inspirational artist would be H.R Giger.

I started with some scribbles to work out plans and spacings. Once I had something in my head that I liked, I took it to Max and made a blockout. I wanted to establish the 3 viewpoints early on. Each needed a purpose. After setting them up and pushing things into the correct composition I did some quick mental ray renders for a base to paint over and photobash... that didn't go all too well for the design. I did these in a day.

Cam 1 - Majesty/Context. Demonstrating the importance of the throne. Symmetry enforcing it's majesty. Cam 2 - Crew/Throne. Closer to the throne, up one level. Crew workstations in the foreground. Cam 3 - Space/Captain's View. Showing the vast view into space, up another level. Other side from cam 2. After speaking to my workmate he touched on key architectural flaws regarding the art style. His help also made rethink my layout and space illogically. My mind set was to make it logical and safe. Dark art is completely the opposite. It needs to be as uncomfortable as it can be. It needs to make the least amount of sense it can.

I started again and I'm much happier with the design now. It's going in the right direction. I removed all the straight lines from what I had before. Also, having massive views into space didn't make it so dark either. That was an obvious one. I'll be able to keep 2 of my cameras, so I'll need to find a new third one.

Space / Design
This room simply wasn't grand enough. The idea of opening it up to interstellar space wasn't working so I needed another solution. A floating platform supported only from the wall where the door was. Boundless floor and ceiling yet surrounded with curved collumns. I pulled the high ceiling from gothic cathedral architecture as a base. Still maintaining that grand staircase, with plenty of symmetry to reinforce dark regality to the throne. The throne has gained power with these changes and with the reduction of a crew deck (abandoning the control room idea altogether and focusing soley on the throne).

No balustrades! I needed to reduce safety not heighten it! I've concepted skulls on sticks in their stead. And their potential purpose could be to help with lighting. Shallow stairs behind the throne.

Lighting
Firstly, drastically reducing visibility into interstellar space had to happen. Well, my idea so far is to have the lighting style in Bladerunner with lany louvres allowing only streaks of light into the scene. This works well as it enhances eeriness, decreases light bleeding into the scene and only allows glimpses into space. The louvres will have to be organic and curved to maintain the art style.

Materials
I did some colour concepts before I monochromed them to see if I could use bronzes or golds. Colour just didn't work for this, nor should it. It goes against all the hard work of making it unfamiliar. Fortunately this topic isn't as important as it is in the majority of other realistic styled projects. It will likely be a metal. I'll play with some desaturated hues once some assets are in and the base lighting is set up. The light hue itself will be edited to complement the materials. Not a problem... in space!

I've also made a gantt chart to plan how I should spend my time. They're general tasks but they provide me with the right structure to make it in (and time allocated to it too). Lots of zBrush! I will have to swap out tasks such as making the desks in exchange for making the collumn skulls, but the quantity of work is the same. I'd appreciate your suggestions throughout the project, most importantly now during the concept stage whilst I have a week remaining to freely edit anything. Any pointers, techniques, or reference links is always welcomed!
0 · Share on FacebookShare on Twitter