GreywaterRPG
Offline / Send Message
GreywaterRPG
Jan 2014
Hello! We’re TeamSweepy , and we’re working on a pixel-art hack n’ slash Steampunk RPG called Greywater. We just released our public alpha into the wild for feedback, and we are looking to expand our team so that we can dive into the creation of the core content of the game.
Check out these Alpha Screenshots! or this Gameplay Video: [ame= 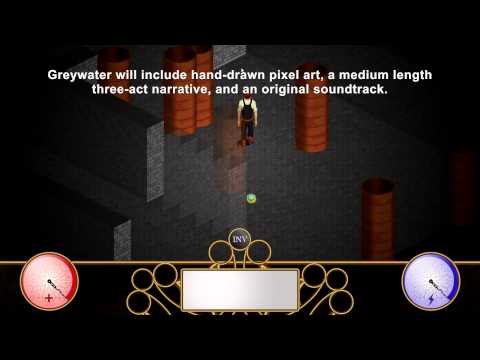 What we’re looking for:
We are primarily seeking pixel artists, although we are also looking for a concept artist, and storyboard artist at this time. As a pixel artist, you would be responsible for transforming ideas and concept art into in-game assets. Here are some samples of the sort of assets you'd be working on.

As a concept artist, you'd be responsible for bringing characters and environments to life. As a storyboard artist, you would be transforming written cutscenes and story events to a visual medium.

About us
We are a small team (3 artists, a composer, a programmer, and a writer) developing the game as a hobby project.

While this is (for now) a profitless affair, we do intend to launch a Kickstarter campaign when the project is farther along to help support the team. Until then we can’t compensate you monetarily, however we will validate you emotionally by shipping you a spiffy team T-Shirt and buttons, and by featuring your work in the game.

Expectations:
We are fairly transparent about our development process, and you’re welcome to use your work on the project in your portfolio (though we’ll ask that you avoid releasing spoilers into the wild). We don’t expect a full-time commitment, but we do ask that you contribute on a semi-weekly basis, and stay in contact. The team holds weekly audio meetings over Skype where the departments update each other on progress, and discuss issues, ideas, and internet memes.

A little More about the Game

Greywater Codex wrote:
The Gameworld
The game begins in the oldest district in a dystopian city now known Greywater (named for its polluted rivers). It was once a place of industry and prosperity, but now sits cloaked in the shadows of a towering structure which houses great, sprawling factories, and at its peak, a city for the wealthy elite. It is similar to Final Fantasy 7's "Midgar." The poor live down below in Greywater, and the working class live in a large settlement partway up the structure which is mostly enclosed. Greywater is extremely polluted as the smoke and waste of the factories in the great city above are funneled down into Greywater through pipes and sewers. Greywater is home to drug addicts and the destitute, as well as everyday folk struggling to get by. Resources are limited, as is access to fresh food and water.

Profile: Tavish Gordon (Protagonist)
Our protagonist is a gifted young man named Tavish. He is the reluctant hero (inspired by many of Martin Freeman's characters). Here's his profile from our dev wiki:

Tavish is an engineer by trade, and serves as an apprentice to the machinist of Oldtown. Working under the heel of his mentor has made him quick on his feet and good with unconventional problem solving. He's a tinkerer and builds gadgets in his free time. Though combat is not his area of expertise, a life of labor keeps him emotionally capable and physically fit. Tavish is a largely private person, he prefers not being meddled with, and meets adversity with exasperation. Despite physical fitness and mental acuity, he doesn't seek out adventure or even challenges, but he's the sort of person that people look to for leadership and solutions, Even though hates being in positions of responsibility, he does care deeply about others.

Tavish was sent to serve as the Machinist's apprentice as a teenager, and has lived under the Machinist's roof ever since. His parents, recognizing Tavish's potential early in his childhood, saw the opportunity to spare him from growing up in a harsh world, with nothing in his future beyond a hard life as another faceless laborer. Today, his parents live in one of the outer districts of Greywater city. Although only in their early to mid forties, life in Greywater has taken a toll on their health and their spirits. Tavish sends his parents a portion of his wages and visits them on holidays, but they are almost strangers to him now.

On one of his jobs, he discovers something which sparks his journey up through the labyrinthine sewers, railroad tunnels and factories of the structure (sort of like Diablo 1 in reverse).

Other Stuff
There are three "towns" (one per story act), each with a small cast of significant NPCs of varied personalities and appearances who play a role in the story and serve as vendors and quest givers. Of the three acts of the script, the first is writen (as is a chunk of the second), so there's still a lot that's yet to be decided. We do have a solid skeleton laid out for the course of the entire story though. The entirety of the game takes place throughout Oldtown Greywater and several locations along the structure.