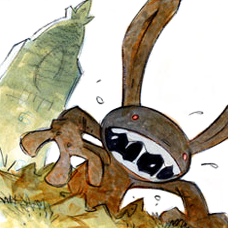 Just a few thumbnails so far, trying out different ideas.