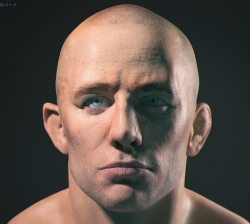 I've noticed some of my biggest weak points include sculpting likenesses, as well as rendering realistic portraits, so I'm taking this opportunity to combine both of those into one project and create a likeness of one of my favorite musicians, and take it to final render. This is also my first try with fibermesh, so I'm hoping to learn that better also.

I'm using these three images as my main reference, with the "LOVE" photo being what my final comp will look like.